The holy cities of Najaf and Karbala are digging trenches around the cities to stop terrorists from coming in and launching attacks. 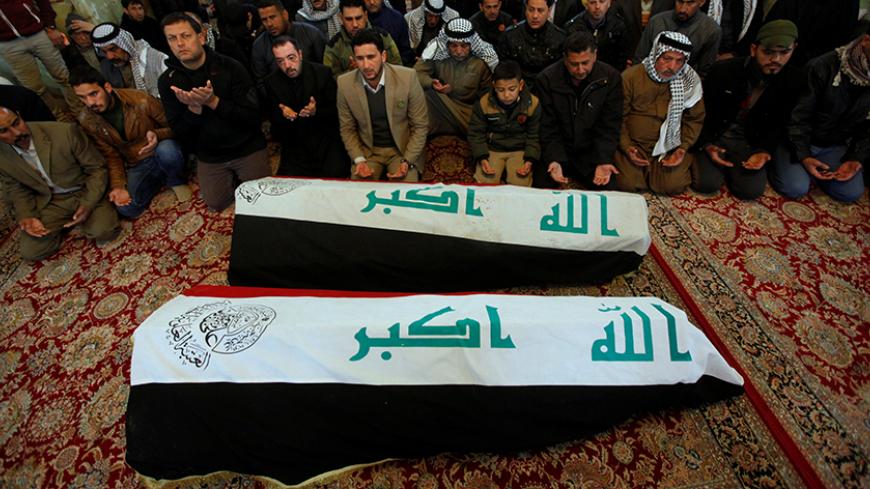 Mourners pray during a Feb. 17, 2017, funeral in Najaf, Iraq, for victims who were killed when a car packed with explosives blew up the day before. - REUTERS / Alaa Al-Marjani

BAGHDAD — On Feb. 22, the head of the central Euphrates operations command, Qais Khalaf, said that work will continue for digging a security trench around the administrative borders of Najaf province, which Shiite Muslims consider sacred since the shrine of Imam Ali Ibn Abi Taleb (599-661), the cousin of the Prophet Muhammad and the first Shiite imam and the fourth caliph in Islam, is located there.

Najaf is roughly 180 kilometers (112 miles) south of the Iraqi capital, Baghdad. In addition to being a sacred place for Shiites, who make up the majority of the Iraqi population, many senior Shiite clerics reside in Najaf, most notably Ayatollah Ali al-Sistani.

The province of Najaf is surrounded by the provinces of Muthanna, Diwaniyah, Babil, Karbala and Anbar; Najaf also borders Saudi Arabia. Since Ninevah province fell into the hands of the Islamic State (IS) in June 2014, authorities in Najaf have been concerned about the possibility of becoming the victim of terrorist attacks, a risk that particularly increased after IS took over Sunni-dominated Anbar province in May 2015.

That the Najaf desert is open to Saudi Arabia raises more fear of major terrorist attacks targeting the province, which is visited by millions of Shiites on several religious occasions throughout the year. This fear is believed to be justified, since IS members are able to live in desert areas, such as in Anbar province.

Security chaos has prevailed in Iraq ever since the US invasion in April 2003.

Every now and then, rumors surface about “suspicious action” by Saudi Arabia along the border with Najaf. However, security forces and the local government in the province immediately deny such allegations.

Compared with other Iraqi provinces, Najaf is relatively safe. Yet five suicide bombers carried out an attack near a security checkpoint in the province's locality of Qadisiya on Jan. 1, killing five security officers and two civilians.

Consequently, Najaf Gov. Luay al-Yassiri met with Abu Mahdi al-Mohandes, the deputy head of the Popular Mobilization Units (PMU), and decided to increase protection measures in the Najaf desert and speed up the work on the trenches that stretch from the western side of the province to the province of Diwaniyah.

On Jan. 15, the council of Najaf announced the trench will be 50-70 kilometers (31-43 miles) long, and the Shiite Endowment claims to have covered about a third of its cost. However, its implementation is directly supervised by the Imam Ali Brigades, the armed faction affiliated with Imam Ali Mosque, fighting under the umbrella of the PMU.

The trench will be four meters (13 feet) deep, surrounded by surveillance towers and thermal security cameras. In addition, monitoring posts will be erected and drones will fly around the clock to detect any movement on the borders of Najaf.

Yassiri, who is a member of the State of Law Coalition led by Nouri al-Maliki, told Ayn al-Iraq News that the security trench “holds a major strategic military importance,” noting that it will have “extremely high standards that are very difficult to breach.”

He said, “The trench will protect four provinces — Najaf, Karbala, Diwaniyah and Muthanna — against any terrorist attack from the western desert.” He added that the trench will have economic benefits as well since it will put an end to smuggling.

On Feb. 7, the PMU announced that 90% of the trench has been dug, and that all work will be completed within a week — a promise that was not kept.

Although the PMU, Najaf’s local government and the Shiite Endowment covered the cost of digging the trench, Karim al-Khaqani, a commander of the PMU’s second brigade, told Al-Hashed.net, the PMU’s official website, “The second brigade, the federal police and Najaf’s emergency squad will share the responsibility of maintaining security at the trench in the Najaf desert.”

Meanwhile, in the city of Karbala, near Anbar province, another trench is being dug to protect it from rigged cars. Other provinces and districts are putting up fences or digging trenches to thwart threats; this is occurring with Fallujah, an Anbar province city recently been liberated from IS.

Some Iraqi lawmakers, such as Talal Zubai of the Iraqiya List, have expressed opposition to the trenching plan to protect cities from terrorist attacks, arguing that such plans were “medieval” and allow provinces to exceed their administrative borders.

However, Hashem al-Hashemi, an expert on security affairs and extremist groups who provides the Iraqi government with security advice, believes otherwise.

Speaking to Al-Monitor, Hashemi said, “Such trenches are necessary to prevent rigged cars and terrorists from moving from one province to another, and they impede the smuggling of banned goods too. Najaf and Karbala are considered a permanent target for terrorist groups.”

The truth is, the provinces of Najaf and Karbala fear terrorists could come in from Anbar, over which the government forces have regained control, except for three small cities, far from Najaf’s borders — Rawa, Anah and al-Qaim — that are still under IS control.

In this context, Hashemi said, “Even if Anbar is liberated, this does not mean the priorities of those extremist groups have changed; they still aim to target relatively stable cities.”

He added, “Digging a trench is one of the least expensive options and so [the provinces] had to go with this security plan in light of economic austerity in Iraq,” due to the drop in oil prices and the increased cost of the war on terror.

In fact, digging trenches is not enough to secure provinces, especially in a province such as Najaf that is visited by millions of pilgrims every year. The most important intelligence effort still lies in maintaining security, which Iraq is clearly still failing to do.