The Islamic State’s advance toward Baghdad is causing stress and confusion among residents, though government forces are maintaining a tight grip on the capital. 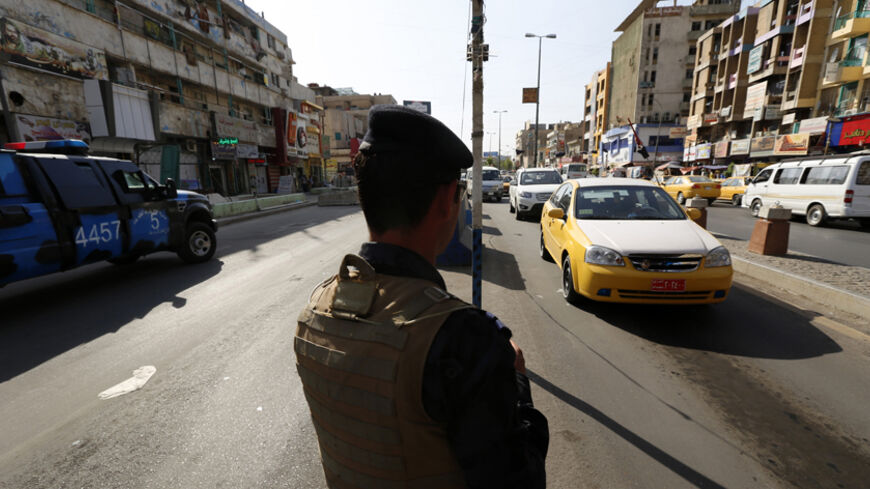 A member of the Iraqi security forces stands guard at a checkpoint during an intensive security deployment in Baghdad, June 16, 2014. - REUTERS/Thaier Al-Sudani

NAJAF, Iraq — After it took control of Mosul on June 10, the Islamic State (IS) announced that its ultimate goal in Iraq is to control Baghdad, as the capital holds a great symbolic importance to it and its seizure would likely enhance the stability and recognition of its state by other Arab countries. IS knows how difficult this takeover will be.

IS has made previous attempts to get closer to Baghdad from the north, after seizing Tikrit, which is located nearly 160 kilometers (100 miles) away. Yet, it failed after the Shiite areas were mobilized against IS’ progress toward Baghdad. The group continued to carry out suicide bombings in Baghdad to inflame the Sunni-Shiite sectarian conflict upon which the group has always strategically depended.

Since Oct. 13, IS has moved on Baghdad from the northern and western sides. At the same time, it relies on the southern and sympathizing areas where large Sunni segments reside. The group has recently dominated most parts of Anbar province, and still retains many areas in the provinces of Diyala and Salahuddin, north and east of Baghdad. It killed Anbar police chief Maj. Gen. Ahmed Saddak al-Dulaimi on Oct.12, upon whom the government relied to control the province, given his tribal affiliation with the area and his long military experience and harsh manner in dealing with terrorists.

The recent developments have led to widespread horror in Baghdad, particularly since they coincided with a series of bombings in Shiite areas, including more than a dozen explosions in Kadhimiya. The area includes a major Shiite shrine. The bombings also led to the killing of Ahmed al-Khafaji, a member of parliament from the Badr Organization's parliamentary bloc, which currently holds the Interior Ministry. In addition, five explosions took place in Karbala, the closest Shiite city to Anbar and which hosts thousands of displaced Iraqis, on Oct. 20. Until now, the security situation was fairly stable in the city.

In Baghdad, tension and rumors spread that IS may take control of the city, leading to the emergence of a broad debate in the media over the ability of the military forces to defend it. On Oct. 14, there were reports that battles took place between IS and the Iraqi army close to Baghdad’s international airport, but the spokesperson for the Iraqi Interior Ministry denied them.

Political leaders expressed concern over the deteriorating security situation. Bayan Jabr, head of the Citizen’s Bloc in the National alliance, said, “Baghdad’s surroundings have witnessed IS attempts designed to disturb the security situation in the towns of Dhuluiya, Balad, Al-Mushahida, Dujail, Tarmiya and Jarf al-Sakhr. These will be accompanied in the coming days with attempts to cause internal strife.”

These developments have pushed Iraqi Prime Minister Haider al-Abadi to express a clear position during his Oct. 16 visit to the Fourth Military College in Dhi Qar province. He said that terrorists have been dealt painful blows by the Iraqi security forces, and that is why they circulated rumors that they are at Baghdad's doors.

Abadi stated, “Baghdad is protected and safe. It is still inaccessible and will not fall just because there are useless rumors.” He pointed out, “The armed forces have expended the security perimeter around Baghdad, kept the group at a long distance away from the capital and liberated a large number of areas in a number of provinces, particularly in Diyala, which is now totally liberated, and many areas in the province of Salahuddin.”

Nevertheless, many worry that reports in the media and statements by government officials constantly contradict each other, and misinformation and surprises continuously alter the military and security scene.

Activists have created Facebook pages such as “Baghdad is fine” or “Baghdad OK” to calm the situation and disseminate positive news about Baghdad’s resilience, as well as information on the government forces’ victories over IS.

Finally, although it seems very difficult to imagine IS taking Baghdad, as an overwhelmingly Shiite-majority city in excess of 5 million people, the group is capable of spreading fear there through suicide bombings, security breaches and military operations in neighboring areas. The sense of chaos is heightened by rumors spread in different media outlets.