In the absence of deterrent laws and decisive action by the government, Iraqi journalists continue to face all manner of threats, including kidnapping, murder and persecution. 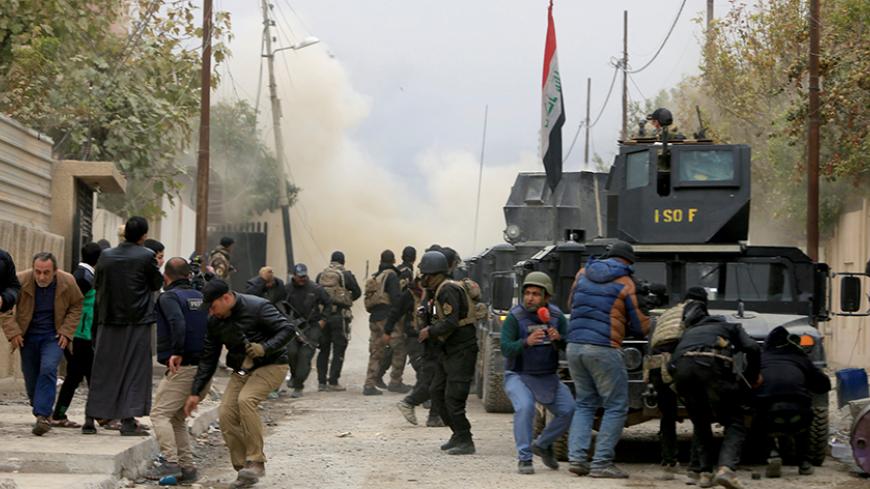 BAGHDAD — Abdul Qader al-Qaisi has become Iraq's first slain journalist in 2017. He was kidnapped Jan. 1, and security forces found his body Jan. 5, dumped on the road between Kirkuk and Baghdad. Qaisi was a member of the Kurdistan Syndicate of Journalists and he was also the lawyer of former Vice President Tareq al-Hashemi.

Two days before Qaisi's body was found, Iraqi journalist Afrah Shawqi was released after being kidnapped and held for nine days.

"I don't know who kidnapped me, but it seems they were an unorganized armed group," Shawqi told Al-Monitor on the sidelines of a press conference she held a day after her release. "I think I was taken out of the capital because it took hours on the road from where I was kidnapped until we reached the cell I was held in."

She said the kidnappers interrogated her about a story she hadn't written that appeared in a newspaper she no longer worked for when the story ran. Shawqi had, however, previously written about the pictures of dead fighters from armed Shiite factions that were posted in the streets of Baghdad, raising the ire of many supporters of those factions. A few days before she was kidnapped, she had criticized how weapons are chaotically spread among several armed groups and militias.

Shawqi's kidnapping stirred quite a buzz in Iraq, as activists and journalists formed a civil movement and took to the streets every day to call for her release. They said their actions were useful, and they plan to continue defending freedom of the press.

"The civil force, formed by organizations defending freedom of the press, human rights organizations and prominent journalists in Iraq, played a major role in Shawqi's release," Ziad al-Ajili, the director of Iraq's Journalistic Freedoms Observatory, told Al-Monitor. "Journalists are concerned about being kidnapped or killed. However, they insist on continuing to do their job and unite against any action that seeks to restrict their freedom."

International organizations concerned with journalistic freedoms have always noted that Iraq is one of the most dangerous countries for journalists, with more than 400 killed since 2003. That's an average of 31 per year.

Walid Ibrahim, the director of Al Jazeera's office in Iraq, spoke with Al-Monitor about the problem.

"The recent incidents in which journalists were victims are proof that journalists are still threatened by many parties, most notably militias, which have today gained a political and government cover," Ibrahim said, referring to a recently passed law granting official status to the controversial Popular Mobilization Units, a grouping of militias accused of human rights violations. He added, "These groups do not tolerate being criticized and do not like journalists who refuse to deal with them and [who] believe the existence of such groups contradicts the principles of a civilized society and is contrary to the foundations of true democracy."

Journalists in Iraq face significant risks, especially those who work in the field and write articles that displease the armed groups trying to extend their influence in Iraq. However, the groups are rarely held accountable for their actions against journalists.

Iraq has a law on journalists’ rights, but many in the business oppose it because they believe it was passed for political purposes and does not actually serve journalism.

Saad Maan, a spokesman for the Iraqi Interior Ministry, told Al-Monitor, "We support journalists and we call on them to continue to practice their profession normally. We promise to provide them with protection and to hold accountable all those who violate their rights."

But despite the repeated promises made by Iraqi security officials, the people and parties who threaten or kill journalists are not brought to justice. On the contrary, there are many examples of impunity. Journalists have united to try to pressure political parties into helping, but reporters and editors still fear the possibility of falling victim to kidnapping and terrorist attacks.

Imad al-Abadi, a well-known show host in Iraq who survived a 2009 assassination attempt in Baghdad, told Al-Monitor, "Iraqi journalists still face many risks. Iraq is not a safe environment for journalists. We fear the [future] … in light of armed groups and gangs targeting freedom of expression."

Since 2003, not a year has gone by without Iraqi journalists being killed, which reflects the absence of legal and field protection from government authorities.

Shawqi's kidnapping was seen as a threat to journalism and to freedom of opinion and expression: Don't criticize armed groups.

Iraq can be a dangerous place for anyone, but journalists face the added threat of being kidnapped or killed at any given moment simply for being journalists. Yet, they continue to tell the stories of other people's lives, until it is time for someone to tell theirs.