The rise of attacks against US military bases in Iraq in conjunction with the ongoing protests may be a warning message from Iran to Washington. 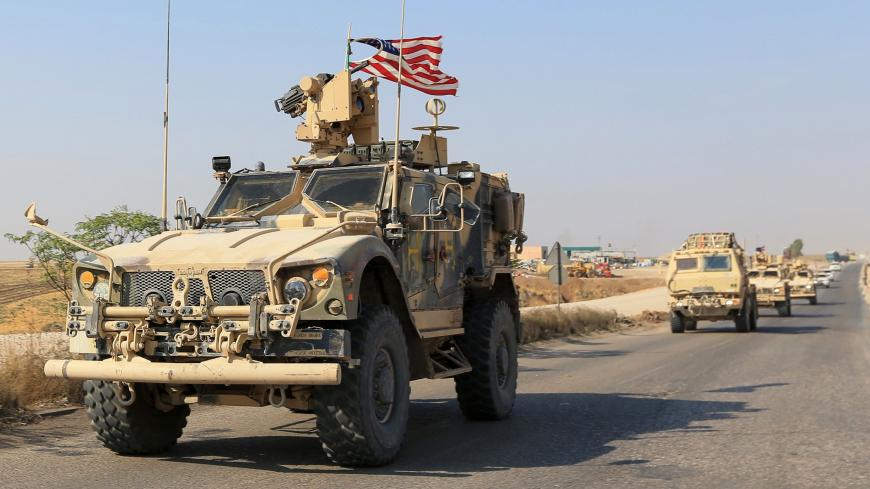 The US government believes Iran is behind a series of advanced missile attacks, which have increased recently, on joint US-Iraqi military facilities. The attacks were allegedly carried by Iranian-backed groups inside Iraq. A US official has revealed nine missile attacks on or near Iraqi facilities hosting US forces in the past five weeks.

Most recently, Iraqi authorities announced Dec. 12 that two rockets had landed near a military base housing US soldiers in the vicinity of Baghdad International Airport.

On Dec. 5, Balad air base north of Baghdad was hit by two missiles. Security sources believe that Kataib Hezbollah, one of the most prominent Iran-backed PMU factions, was behind that attack.

One day before that, Ain al-Assad base, the focal point of the US forces’ presence in Iraq (with 5,200 US soldiers), was hit by five missiles.

On July 17, the Taji camp, a base for US forces north of Baghdad, was hit by Katyusha rockets. Mortar fire was also directed at the base Oct. 28.

Military bases were not the only targets. On June 19, a rocket landed near an oil-drilling site that houses US giant ExxonMobil in the city of Basra in southern Iraq.

A spokesman for the Iraqi Joint Operations Command, Tahsin al-Khafaji, told Al-Monitor, “Terrorist groups are bombing the camps in general in Iraq. These groups have missile platforms, which are intended to target military bases and sites.” Khafaji did not specify the names of these groups.

Fadel Abu Ragheef, a security analyst close to the Iraqi intelligence services from the Development Research Center, told Al-Monitor, “The attacks on bases are not new. At the start of the past two months, attacks have been repeated by groups and factions opposed to the US presence in Iraq and to the Strategic Framework Agreement between Washington and Baghdad.”

He said, “Hitting US targets at this time has a special dimension as it coincides with demands-based protests that have created a new perspective on the US positions. Countries such as Iran have influence, arms and supporters within Iraq who rush to express discontent with Washington's policies by hitting US targets in Iraq.”

Abu Ragheef expected the attacks on US bases to increase in pace due to the worsening political and security situation in Iraq.

US forces are stationed in Iraq at several bases. In northern Iraq, there is a base near Sinjar, and others in the areas of Atrush and al-Harir, in addition to two bases in the city of Halabja in Sulaimaniyah province near the Iranian border, and at the Qayyarah military airport south of Mosul. US forces are also present in western Iraq at the Ain al-Assad base and the Habbaniyah base in Anbar province. In central Iraq, the US military has a stronghold at Balad air base in Salahuddin province to control F-16 air sorties. Another US military force is present at Taji camp, north of Baghdad, for training purposes. US forces are also deployed at Baghdad International Airport for command and intelligence services.

Mazen Sahib al-Shammari, a journalist and researcher who served as editor-in-chief of the Baghdad News, linked the attacks on US interests in Iraq to Iran's troubles involving the nuclear deal, sanctions and other issues.

He told Al-Monitor that many believe Washington has been behind the successful mobilization of the Shiite street against Tehran and that this has generated reactions in the targeting of US bases. “The Iraqi authorities are still caught between the hammer of Iranian influence and the anvil of the strategic framework agreement with Washington,” Shammari said.

Mohsen al-Shammari, a researcher on Iraqi affairs and a former minister of industry, expected a soft US response to the attacks. He told Al-Monitor, “Washington will not use military solutions.”

Ali Al-Tamimi, a former legal expert and judge who specializes in international law, predicted a US and Iraqi diplomatic and legal response to the attacks. He told Al-Monitor, “The US presence in Iraq is imposed by the strategic agreement between it and Iraq in 2008. Any attack on this presence is classified according to the Iraqi counterterrorism law as a terrorist act, irrespective of the perpetrating party, group or militia.”

Tamimi said the Iraqi government ought to investigate and catch the perpetrators and hold them accountable according to Article 4 of the Antiterrorism Law. “Iraq can also file a complaint against countries that support the attackers and help these groups under Articles 1, 2 and 3 of the United Nations Charter.”

Political analyst Maher Abd Joudeh of the Al-Madaen Center for Research said the attacks fall within the scope of the history of the escalating American-Iranian conflict. “There was an exchange of messages between the two countries. Baghdad turned into a mailbox between Washington and Tehran, especially in times of crises,” he told al-Monitor.

“The failure to identify who is targeting the US forces is due to the prevailing security and political chaos in Iraq. The country has become a scene for international conflicts and an intelligence services hub. Add to this the control of political parties, mafias and armed groups over the state,” Joudeh said.

The US presence in Iraq has gained legitimacy from the agreements between the two countries and the approval of the Iraqi government. This requires a political and security decision that prevents attacks and ensures that US forces not attack any country, especially Iran, from Iraq. Thus the justification that could push the factions loyal to Tehran to target US forces in Iraq would cease to exist.