Iraq's transmission towers are increasingly the target of bombings. 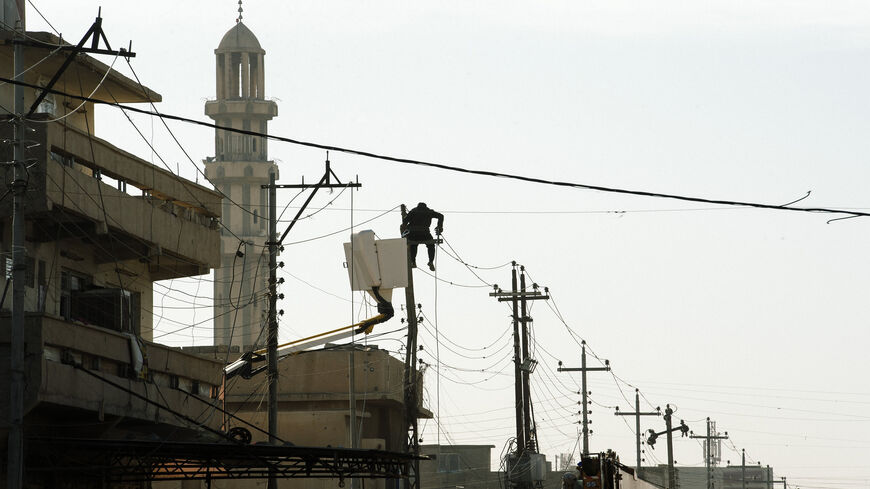 An Iraqi municipal worker fixes the cables of an overhead power line in al-Zahraa neighborhood in Mosul, during an ongoing military operation against the Islamic State, Iraq, Jan. 11, 2017. - Dimitar Dilkoff/AFP via Getty Images

Water supply plants stopped operations entirely Aug. 14 in the Karkh neighborhood of Iraq's capital Baghdad after the power plants supplying it with electricity were bombed. The incident falls within a series of organized attacks on power plants across Iraq. In response, Iraqi President Mustafa al-Kadhimi stated Aug. 14, "The terrorists and chaos spreading forces are behind these events as they do not want stability for the country." On Aug. 13, Kadhimi tweeted, "Terrorists and fundamentalists do not want anything good to happen in Iraq. They are trying to change the situation by targeting the power plants."

Since Aug. 9, the Qayyarah-Mosul Dam supply line in the north of the country has been targeted with explosives leading to the collapse of three towers. A day of targeting these facilities led to the decrease of power supply for hours in Ninevah province.

The attacks spread from the center to the south of Iraq. On Aug. 12, power supply lines in Karbala center were hit with explosives impacting two towers.

These attacks have been an ongoing issue in the country, with incidents often being attributed to the Islamic State (IS). The expansion of the war on transmission towers pushed the Iraqi army on Aug. 13, 2020, to devise a new plan to secure the towers. They dug trenches and set up barbed wire around towers so that they could not be bombed.

Spokesman for the Iraqi Ministry of Electricity Ahmed Moussa told Al-Monitor, "The increase in attacks on electricity power plants over the summer in Iraq has greatly affected the ability to prepare."

He said, "Hundreds of explosive devices have targeted electric power transmission lines in the past few months. Some attacks are random while a great number is planned to target strategic lines linking the central station to the northern stations."

Moussa noted, "The attacks aim to isolate the provinces from each other and to cause the greatest damage possible to the strategic electrical projects that feed hospitals, water stations, water drainage projects and other vital institutions."

As an example, he mentioned "how the Nasr-Quds line was targeted with explosives in Tarmia town, north of Baghdad. This led to the suspension of the Karkh water project in the center of the capital Baghdad, thus depriving the residents of potable water."

Moussa added, "The ministry started repairing the damages and reinforcing the Tarmia lines by using electrical sources in the Dujail area in Salah Ad Din [the north]. However, the ministry personnel were targeted. This proves that the attacks have been carefully planned and have specific goals."

Member of the parliamentary Economic and Investment Committee in Iraq, Falah Abdul-Karim al-Khafaji, told Al-Monitor, “Targeting electricity towers has clear political goals. They target both the economy and security.”

He accused “political parties with armed cells that are trying to sabotage the Kadhimi government program. They want the situation to become chaotic, especially with the elections approaching. This is why they are blowing up electricity towers, especially in areas near Baghdad.”

Khafaji said, "They are likely going to expand their operations to the central and southern regions that requires the security authorities to develop plans to stop them."

He noted that the biggest goal of the electricity towers war is "attempting to convince the Iraqis that the Kadhimi government is unable to protect the sources of power lines, and that the previous government was more capable. They are trying to speed up the end of Kadhimi's term after other attempts to take him down have failed."

The transmission line in Samarra, south of Tikrit, was suspended Aug. 12, as a result of a sabotage act that led to the detonation of an explosive device. Mayor of the Samarra district Mahmoud al-Samarrai told Al-Monitor, “Most of the towers are located in inhabited agricultural areas, and it is not possible to attribute all the explosions to IS."

Samarrai believes that “targeting energy towers is also linked to external powers looking for ways to influence Iraq's local situation in order to direct events according to their interests."

He added, "This agenda partly aims to obstruct the government’s attempts to create balanced relations with the countries of the region. They want the Baghdad conference of neighboring countries to be held in an unstable and charged atmosphere."

Member of the security committee in Baghdad's Provincial Council Saad al-Mutalibi told Al-Monitor, “Baghdad is greatly affected by the bombings of the towers because it is the intersection point of the northern and southern power networks. The sabotage project is political par excellence. It is not a security matter. The goal is to sabotage government action by parties that have so far not been identified by the security officials."

Legal expert Tariq Harb told Al-Monitor, “The cost of repairing the towers and maintaining them are the responsibility of the state. The perpetrators therefore are subject to severe punishments according to Iraqi law. Yet the problem is that there is political coverage for these perpetrators. Well-known blocs and forces are happy with this sabotage, assuming they are not executing and participating in it to influence the Kadhimi government. They want to portray the government as weak.”

He expects “the attacks will stop as soon as a new government is formed by forces opposing Kadhimi.”

Wathiq al-Jabri, political analyst and adviser at Iraq's Writers Center, told Al-Monitor, “There is a corruption factor in the operations targeting transmission towers. Corrupt groups are targeting strategic or high voltage towers to benefit from their reparation and maintenance contracts. They are worried about the anti-corruption campaign led by Kadhimi and are trying to influence it."

This is unlikely to be effective as long as the perpetrators enjoy political cover that protects them from legal accountability.