Power transmission towers have recently been targeted in Iraq, which already is suffering from major electricity shortages. 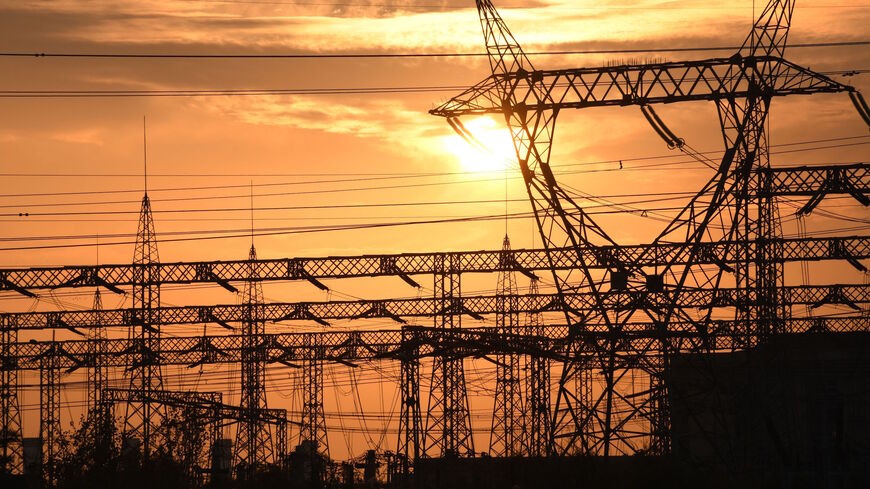 The sun sets behind electrical grids in the southern Iraqi city of Nasiriyah in Dhi Qar province, on Jan. 3, 2021. - ASAAD NIAZI/AFP via Getty Images

The Joint Operations Command in Iraq called on citizens July 1 to “be brave” and report individuals who are damaging electric power transmission towers.The command also offered a financial reward for those who report the incidents.

Hours before this announcement by the Joint Operations Command, the Government Security Media Cell in Iraq announced that the security forces had seized a cache belonging to the Islamic State (IS) containing dozens of explosive devices intended to target the electrical transmission towers in the north of the country.

Sources told Al-Monitor that the attacks on power transmission towers in Iraq may not be limited to IS; one source said they are being intensely attacked by “several parties” and a government statement blamed "terrorist and subversive groups."

This is the biggest sustained attack on power transmission lines that has taken place in the country, which has long been suffering from a major electricity crisis.

On June 29, Iraqi security forces thwarted an attempt to target electricity transmission towers in the eastern province of Diyala; other such attempts have also taken place in recent days.

One day before the June 29 attempt was thwarted, the Iraqi Electricity Ministry announced that the Diyala-East Baghdad line 400 No. 2 had been cut in two places; transmission towers were targeted by explosions and by other operations near Khan Bani Saad.

The targeting of power transmission towers comes at a time when Iraqis are suffering from a significant rise in temperatures, which reached 51 Celsius (124 Fahrenheit) at the end of this week in the central and southern regions, amid continuous power cuts that reached 20 hours a day in some provinces where electricity lines have been targeted.

The Electricity Ministry is working to provide protection for electricity towers through the use of drones. Spokesman Ahmad Moussa said June 24, “The Ministry called on security institutions to operate drones and thermal cameras to protect the power towers from being targeted.”

He told Al-Monitor, “Terrorist acts are committed almost every day to target power towers in the country, and ministry cadres are working to fix them to prevent citizens from being harmed by the service.”

An Iraqi security source told Al-Monitor, “IS is behind these operations.”

The security source added on condition of anonymity, “Some of the towers that were targeted were in desert areas, where IS has hostels. When IS senses imminent danger, it begins to carry out vandalism operations.”

These operations appear to show a systematic plan to harm electricity projects in Iraq.

Iraqis, who have faced chronic and debilitating power shortages for decades, are sometimes inclined to believe that a wider conspiracy is at work involving businessmen, companies and influential people in the country, and even owners of private generators in Iraq.

For more than 20 years, Iraqis have been paying high prices to the owners of private generators to compensate for the great shortfall caused by power outages. Reliance on these generators increased after the US invasion in 2003.

It is known in Iraq that mafias control large areas where private generators are located. Some of these mafias, which are believed to be allied in some way with influential political parties, generate monthly profits amounting to millions of dollars.

A statement issued by the office of Iraqi Prime Minister Mustafa al-Kadhimi on June 28 implies that other parties besides IS may be carrying out operations targeting power transmission towers in order to undercut his government's progress in increasing Iraqi power generation.

The statement, issued after an emergency meeting of the Ministerial Council for National Security, said, “The electric power production began to rise and exceeded 20,000 megawatts, which is the highest in the history of the Iraqi state. Some vandals and terrorist and subversive groups are seeking to trouble the situation by targeting stations and towers, which has caused a loss of energy for areas in Baghdad and the Middle Euphrates, and has exacerbated the suffering of the citizens.”

The government used the term “subversive groups” alongside the term "terrorist" to indicate that IS is not the only one targeting power towers, otherwise it would have settled for “terrorist groups,” which is the official description of IS in Iraq.

The provinces in which power transmission lines are targeted the most are Salahuddin, Ninevah and Diyala, where IS cells still exist. Reports say 30 attacks took place on power towers in these provinces within the space of a month.

The leader of the Sadrist movement in Iraq, Muqtada al-Sadr, demanded the dismissal of Electricity Minister Majid Hantoush, saying he was “unable to solve the problems facing the Iraqi people.”

Sadr said June 27, “Terrorism, the explosions it causes on public roads, the maldistribution of stations, and the excessive use of electricity, especially in commerce, shops, hotels and state institutions, as well as the unofficial encroachment on energy, are all factors fueling the deterioration of electricity in Iraq.”

Two days after this tweet, Hantoush submitted his resignation to Kadhimi, the Electricity Ministry spokesman said.