Scorching summer heat, coordinated attacks on power transmission towers and Tehran cutting its power supply to Baghdad have contributed to severe power shortages across the country. 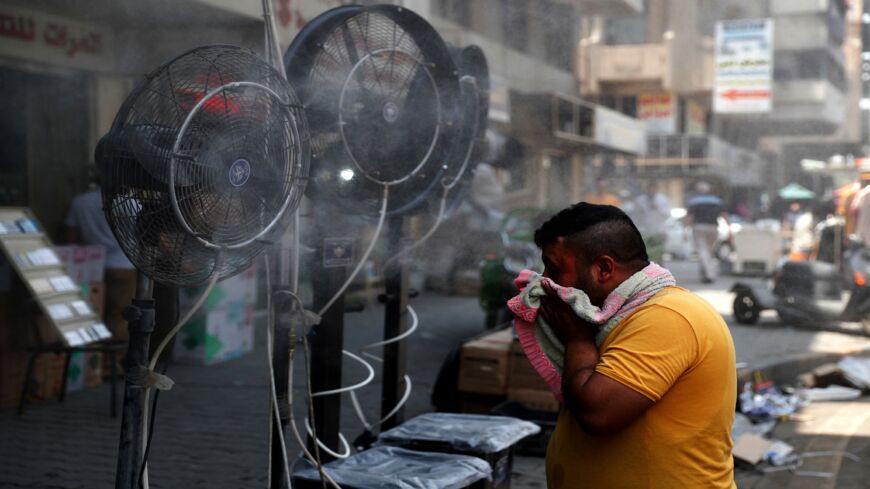 A man stands by fans spraying air mixed with water vapor deployed by donors to cool down pedestrians along a street in Iraq's capital, Baghdad, on June 30, 2021, amidst a severe heatwave. - AHMAD AL-RUBAYE/AFP via Getty Images

Iraq’s Electricity Minister Majed Mahdi Hantoush resigned on Tuesday following pressure over repeated power outages across the country. Hantoush’s resignation coincided with a “complete shutdown” of the power system in the southern governorates of Basra, Dhi Qar, Maysan and Muthanna.

Electricity shortages have plagued Iraq for decades, but this summer is something new. Summer temperatures are averaging over 120 degrees Fahrenheit, coordinated attacks against Iraq’s transmission towers are increasing and Iran cut its power supply to Baghdad amid billions owed to Tehran. Coupled with the resignation of Hantoush, the electricity sector could face its worst summer in years.

“The prime minister needs to find a replacement as soon as possible,” said Harry Istepanian, an independent energy and water expert based in Washington, DC, and a senior fellow of the Iraq Energy Institute. “It will be challenging for anyone who will accept the portfolio to make a ‘quick fix.’ Iraq’s electricity problems are chronic and would require not only technical and financial solutions but also legislative and reforming of the entire sector, which could not happen overnight.”

Why it matters: Iraq is plagued by chronic power shortages. In some cases, electricity is only available a few hours a day. These shortages, among corruption and unemployment claims, were at the core of protests that erupted across the country in October 2019 and led to the resignation of Prime Minister Adel Abdul Mahdi.

Two years later, electricity shortages continue to cripple Iraqis. Among the reasons for this crisis are an increase in coordinated attacks on Iraq’s electricity sector. Earlier this month, a major powerline in the Kirkuk governorate was taken offline after an explosive device detonated near two electricity pylons, according to Iraq’s Ministry of Electricity. A similar incident occurred in March. The Islamic State is suspected of being behind the attacks, according to Iraq’s Security Media Cell.

Iraq’s national grid contains 46,000 towers. The cost to repair each is about 30 million dinars ($20,540). So far this year, the grid has suffered more than 35 attacks, according to Prime Minister Mustafa al-Kadhimi’s office. Kadhimi ordered security forces last week to double down on efforts to secure these towers. But as recently as Wednesday morning, another terrorist was killed trying to blow up electricity pylons in Diyala.

What’s next: In order to take effect, Hantoush’s resignation has to gain the approval of Kadhimi. Calls for the minister to step down were echoed earlier this week by Sadrist leader and popular cleric Muqtada al-Sadr. Sadr named corruption and mismanagement as the main source of the country’s electricity crisis and criticized Iraq’s use of international companies to rehabilitate the electricity sector.

But Hantoush handing in his resignation hasn’t dampened calls for protests, particularly in Basra, where social media channels clamored for the immediate return of energy after four southern governorates lost all power. Those calls will likely grow louder, as Iran recently halted its energy supply to Iraq, pressuring Baghdad to catch up on the $4 billion it owes for energy imports.

Baghdad relies heavily on Tehran to fill its energy needs. Gas and electricity imports from Iran meet between a quarter and a third of Iraq’s total energy demands. Four electricity lines from Iran into Iraq were registered at zero on Tuesday, according to the Ministry of Electricity data seen by The Associated Press.

This power not only runs businesses and hospitals but also air conditioning units to keep Iraqis cool during the warm summer months. Cities in the south of the country are even shortening working hours, citing extreme heat as temperatures are currently averaging above 120 degrees Fahrenheit (50 degrees Celsius).

Making payments to Iran has also been challenging. The coronavirus pandemic worsened Baghdad’s economy. Even the money set aside to pay for Iran’s imports is difficult to release. Iraq is restricted in paying Tehran directly due to US sanctions. Instead, Washington issued sanctions waivers that allow Iraq to pay for goods, medicines and other expenses. In one instance, Iraq purchased Iran’s coronavirus vaccines.

There is a push by some Iraqi politicians to shift the country’s reliance on Iranian energy. Last year, a deal to connect Iraq’s electricity grids to the Gulf Cooperation Council moved forward. It’s expected to increase the country's electricity supply by up to 500 megawatts. And this month, Abu Dhabi-based clean energy company Masdar announced an agreement with Iraq to develop solar projects.

In the meantime, Kadhimi directed the Joint Operations Command on Monday to hold an emergency meeting to reach an impasse with Iran and make sure Iraqis continue receiving electricity.

“Unless Iraq reaches an agreement with Iran to increase the gas supply during the next coming days, I expect a very harsh summer is waiting for the Iraqis, and we will see the protests back in the streets that might force the entire government to resign,” Istepanian said.

Know more: Al-Monitor looks at how Iran’s foreign policy will be impacted under its new president.