The Trump administration’s reprieve for Iraq from US sanctions on Iranian electricity imports will extend through September. 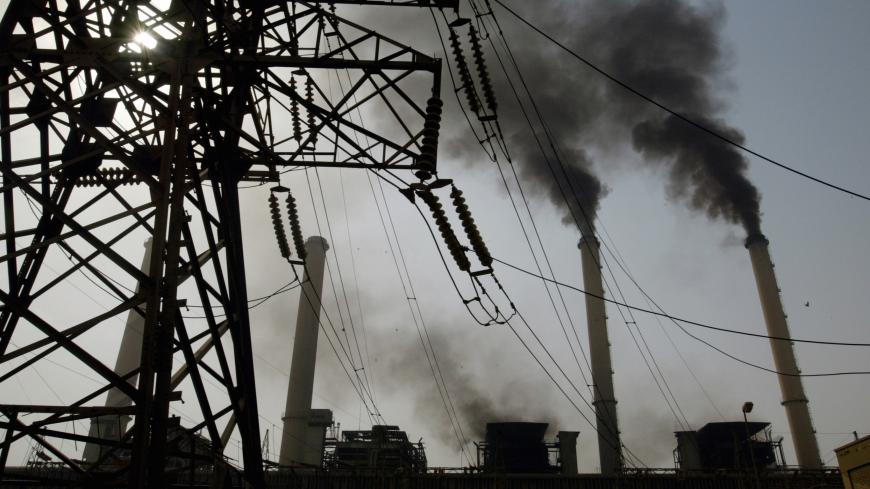 Black smoke pours out of the smokestacks at the Doura power plant in Baghdad, Oct. 11, 2003. - Paula Bronstein/Getty Images

On May 7, shortly after new Iraqi Prime Minister Mustafa al-Kadhimi received confirmation from parliament, US Secretary of State Mike Pompeo called the new premier and told him that Washington will move forward with a 120-day waiver to allow Iraq to import electricity from Iran.

This seemed a gesture of support from the United States to the new prime minister, whose confirmation followed the failure of his two predecessors as prime minister-designate, Adnan al-Zurfi and Mohammed Tawfiq Allawi. Pompeo's move came after Washington had initially agreed April 26 to waiver of only 30 days.

Yet despite the reprieve the four-month waiver provides — as Iraq faces soaring temperatures and increased energy use in the summer — there remains a lot to be resolved between Washington and Baghdad when it comes to Iran’s role in the Iraqi energy sector.

Iraq is still Iran’s most loyal business partner despite hurdles imposed by sanctions, protests, the coronavirus crisis and — most importantly of all — the United States’ continuous pressure on Baghdad to try to get it to drop out of the deals to buy Iranian electricity and gas.

To date, the pressure from Washington has been somewhat muted, giving Iraq time to seek other offers. Yet outgoing Electricity Minister Louay al-Khateeb told Al-Monitor that despite Washington’s pressure to end energy imports from Iran, “I’m sure the US government will be more sensible and understanding as we move forward in protecting our strategic partnership and [helping us] survive the current pandemic and economic crisis.”

While the new Iraqi government has gotten a respite from the United States on breaking its dependence on Iranian electricity, the pressure won’t go away. Iraq will still have to choose whether to continue the partnership with the Iranian side, though Baghdad is unlikely — and unable — to take a hasty decision to withdraw.

The new electricity minister, Majid Mahdi Hantoush, is a technocrat who has served in the ministry since graduation. He’s the son of a famous Iraqi hydrologist, Mahdi S. Hantush, who founded the hydrology program at the New Mexico Institute of Mining and Technology and was a recipient of the Meinzer Award, among the most prestigious honors in hydrogeology.

Iran provides Iraq with around 1,200 megawatts of electricity per day, and 40 million cubic meters of gas. On Dec. 9, Iranian Energy Minister Reza Ardakanian said his country had signed a three-year cooperation agreement with Iraq for extending Iranian energy exports. On Nov. 9, Ardakanian had announced that the power grids of Iran and Syria were to be connected through Iraq, as Tehran and Damascus signed a preliminary agreement in this regard.

From an Iranian perspective, exporting electricity to surrounding countries, including Turkey, is part of Tehran's efforts to widen its financial resources; however, from US President Donald Trump’s point of view, this is an attempt to get around the sanctions imposed by Washington under the “maximum pressure” strategy that aims at drying up all sources of funds that might reach Iran.

Esfandyar Batmanghelidj, founder of Bourse & Bazaar, a London-based think tank focused on Iran's economy, told Al-Monitor, "The Trump administration paints Iran's electricity exports to Iraq and the involvement of Iranian contractors in the maintenance of Iraq's power grid as part of Iran's 'nefarious' influence over its neighbor.”

Batmanghelidj said the drivers in the electricity agreements between Iraq and Iran are economic as well as political. “It's not unusual for neighboring countries to have interconnected electricity grids and for one country to draw electricity from the other. Even the United States imports significant amounts of electricity from Canada,” he said.

Iraqi dependency on Iranian energy isn’t new, and it’s also the best option, according to Iraq’s former energy minister. Khateeb said, “The only available option we have now is the Iranian gas fuel and Iranian electricity supplies to bridge the power deficit in Iraq; so far, their prices, volumes and logistics are competitive with other suppliers, regionally and internationally.”

Khateeb said that during the year and a few months he was in office, his ministry increased electricity production from 15,800 megawatts to 19,270 megawatts. He said additional energy is needed, as Iraq’s power demand is expected to rise to 27,000 megawatts by the end of the year, up from 25,000 megawatts currently.

As part of its efforts to diversify away from Iranian electricity, Iraq signed a deal with the Gulf Cooperation Council to add some 500 megawatts to its grid during 2020. But the 300-kilometer (186-mile) line that would run from Kuwait to Iraq’s southern port of Faw could cover only quarter the energy imported from Iran; hence, it can’t be seen as a potential replacement in case the United States stops issuing waivers.

The summer of 2018 witnessed one of the worst electricity crises in Iraq in years, when Iran had to cut power to the neighboring country due to rising domestic demand, as was announced by the Iranian side, and a $1 billion debt, as was reported then by Al-Monitor.

The energy sector in Iraq has been for years the subject of strong criticism because of corruption, inefficiency and political meddling. The power outages prompted bloody riots in the southern city of Basra and other affected cities. The riots helped bring about political demands, some of which had to do with countering Iran; at one point, the Iranian Consulate in Basra was set ablaze by protestors.

Batmanghelidj said he believes the relatively high Iraqi dependence on Iranian energy supply is a sign of the poor state of Iraq's production and distribution infrastructure. He said, “But the same economic logic that means it is in Iran's interest to supply electricity and gas now also means that it is in Iran's interest for Iraq to become a more stable and faster-growing economy so that other kinds of trade between the two countries can grow. Sanctions pressure from the Trump administration is making this a more contentious issue than it needs to be.”

While it’s not clear whether the United States will continue to extend waivers, the Iraqi government hopes that it will be able to cover its needs and, in the long term, upgrade its energy sector. Khateeb, however, said the only recipe to do that is “three to four years with a stable government that enjoys full executive authority to implement its ambitious program to achieve energy independence without political interference.”