As summer arrives in Iraq, a new wave of demonstrations is beginning in the south, possibly jeopardizing Prime Minister Adel Abdul Mahdi's government. 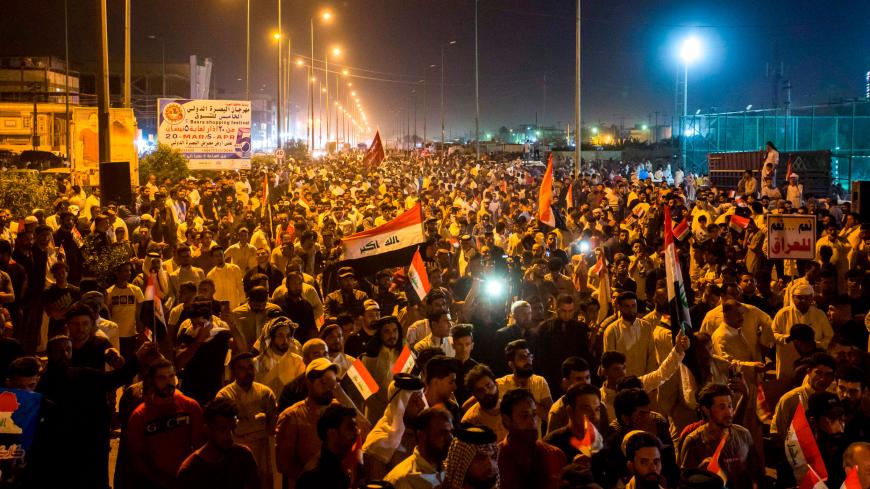 Basra is once again at the center of demonstrations in Iraq, as citizens in the country's southern oil hub protest corruption, nonexistent or poor services that compound dangerous health conditions and the prime minister's failure to install a Cabinet and get on with government business.

For the second week in a row, demonstrations continued in Basra on Friday, June 29. Security forces used live bullets to disperse the protesters. No casualties were reported.

A political source in Basra who spoke with Al-Monitor on condition of anonymity said, “Based on the security apparatuses’ indicators, the political parties learned that the protests in Basra will escalate and will probably [call for] bringing down the government or the current political process.”

As political opposition mounts against Prime Minister Adel Abdul Mahdi's government — by two major Shiite political currents, the Sadrist movement and the National Wisdom Movement (Al-Hikma) led by Ammar al-Hakim, among others — the protests could very well intensify and place additional pressure on the government.

Sporadic protests in recent months have become more organized and are expected to take place every Friday, as planned by a committee. Sadrist movement head Muqtada al-Sadr leads some demonstrations in Baghdad via an alliance with the Communist Party, whose leaders and partisans have been active in the protests.

The organizing committee consists of five members of the Sadist movement and a sixth member affiliated with the secular movement. This group decides the times and places of many protests, and even what signs and slogans are used. But though Sadr officially leads protests in Baghdad, he doesn't control all the protests there, nor does he lead them in Basra, where protests ignite every year.

“There is coordination between independent protesters in the south and in Baghdad. There are political parties that joined [the protests] for goals and interests of their own, such as the Sadrist movement. We are well aware of that and we are working to keep the protests independent," Alaa Ali, an activist in the Basra protests, told Al-Monitor.

He said this year's protests "will probably turn into strikes" because the government hasn't solved any problems.

In the past, some political currents opposed to the protests sought to end them before they even began by trying to associate them with the Islamic State (IS).

Basra province Gov. Asaad al-Eidani recently warned against non-peaceful protesters, be they political or nonpolitical entities, “taking advantage” of the demonstrations to “attack state institutions." Basra Police Chief Rashid Fleih told the press June 19, "Remnants of the Baath [Party] and IS are trying to use the protests to create anarchy and sabotage state institutions.”

Security forces of the Basra Operations Command said June 17 they had found IS leaflets supporting the protests and calling on the province's residents to protest the so-called “Safavid government," referring to the dynasty associated with a Sunni-Shiite Islam split, and some elements of the current government IS says are collaborating with Iran.

Yet protesters deny any IS role in the Basra demonstrations. Also, IS has no social base there.

Some observers say there is a chance other influences might be at work, such as Iran. Wael Abdel Latif, Basra's former governor, doesn't rule out the possibility that the US-Iran conflict could play a role in what is happening in Basra, though he noted other reasons as well.

“The poor services [available], the absence of [other] services and the protesters’ unfulfilled demands have all pushed Basra residents to take to the streets again," he said in a recent interview with Sharqia TV.

At present, the demonstrations most likely are an early warning to Abdul Mahdi's government of the large-scale popular and political opposition it faces.

The protests in Baghdad and Basra have all focused on corruption, elections and poor services. They denounce the lack of anti-corruption government measures, especially as Abdul Mahdi has repeatedly said he would address the issue. Activists in the Basra protests perceive that the Iraqi government is stalling when it comes to meeting their demands.

Since 2015, Basra has been the starting line for protests in the country, and demonstrations in Baghdad have always echoed them. But the Basra protests are largely run by independent activists, contrary to the many in Baghdad that Sadr calls for.

This time, the core Basra protests could last longer than those of past years, and for the first time could demand the government's ouster specifically and denounce the political regime in general.

The protests will test Abdul Mahdi. He could get involved in abuses against protesters, as did his predecessor, Haider al-Abadi. But this would inflame international human rights organization against Abdul Mahdi and feed the popular and internal political opposition.