For the seventh day in a row, protesters challenge the Iraqi government across Baghdad and the south; the death toll rises to nearly 120 as unidentified snipers pick off demonstrators. 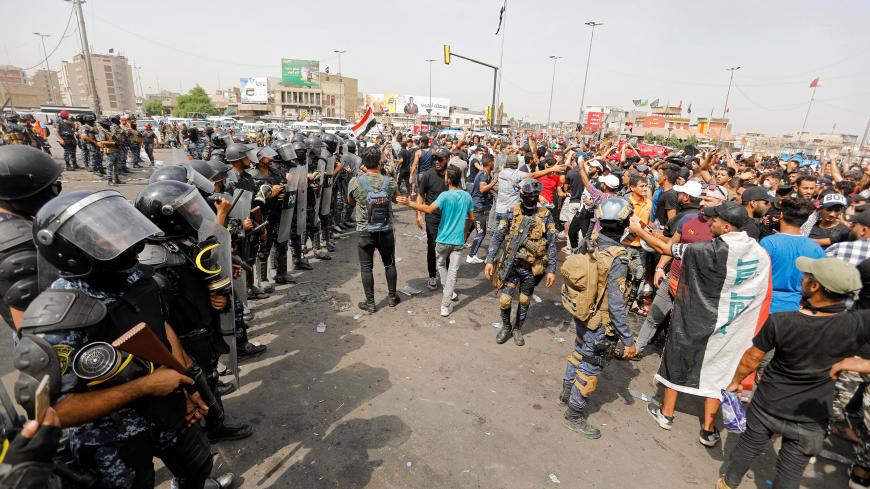 A video of a fearless teenager performing a dance from the popular multiplayer online game PlayerUnknown's Battlegrounds amid heavy bullets and smoke in eastern Baghdad seems to summarize what is happening with the Iraqi protests.

Thousands of young people, mostly teenagers, kept up demonstrations for the seventh day in a row. Nothing — not government promises, military threats, religious advice nor anything else — has been able to convince them to return home yet.

They have nothing to lose. They are jobless, feel humiliated due to Iraq’s weak position in the region, despair about the political system and have little hope for the future.

In such circumstances, it is not surprising to see the death toll rising significantly. On Oct. 7, at least 15 people were killed in a clash between security forces and protesters in eastern Baghdad, pushing the total number of the deaths in the protests to nearly 120, along with more than 6,000 injuries.

Despite the horrible situation in the capital and in major cities of the south, the Iraqi prime minister seems confident about his power to control the situation. In a phone call Oct. 7 between Prime Minister Adel Abdul Mahdi and US Secretary of State Mike Pompeo, the former assured the latter that life had returned to normal. Pompeo also told Abdul Mahdi that he trusted the Iraqi forces and supported the Iraqi government to restore security.

Unsurprisingly, not only Americans but also Iranians supported Abdul Mahdi against the unarmed protesters. Iran and the United States have been cooperating in forming and supporting almost all of the Iraqi governments after 2003.

Iranian government spokesman Ali Rabiei called on the Iraqi people Oct. 7 to keep things under control. “Iran will always stand by the Iraqi nation and the Iraqi government. We are calling on them to preserve unity and to show restraint,” Rabiei said at a press conference.

The protests, which started in Baghdad and some southern cities Oct. 1 over corruption, lack of services and nonfunctional government, have a clear anti-Iranian element.

Protesters have ripped up photos of Iranian Supreme Leader Ayatollah Ali Khamenei, attacked offices of political parties close to Iran such as the Dawa party and other Shiite parties affiliated with political Islam, and have shouted slogans against Iran such as “Iran out out, Iraq stays free.”

Since Oct. 4, demonstrators have faced masked security forces, with the latter using severe violence in order to suppress the protests. There have also been reports of many snipers positioned atop high buildings in the areas where protesters gather, shooting the protesters. These snipers, whom authorities say they have nothing to do with, are behind the sudden rise in casualties over the last few days.

Iraqi security forces have said several times that unknown forces are targeting the protesters, as well as the Iraqi army and police, in what security officials claim is an attempt to escalate the clash between the two sides.

The Iraqi military did admit Oct. 7 to using "excessive force" against the protesters. "Excessive force outside the rules of engagement was used and we have begun to hold accountable those commanding officers who carried out these wrong acts," the military said in a statement.

Iraqi president, Barham Salih in a TV speech condemned targeting protesters and security forces at the same time, implying that the attackers are not affiliated with the government, pointing out that "there are some parties that have interests in investing in every gap, every problem, every rivalry within the country".

Salih did not determine the parties that he accused to be behind the escalation, but Iraqi parliament member Faiq Al Sheikh Ali and former parliament member Mithal al-Alousi accused Iran of being behind the "unknown forces," including the snipers who are targeting the protesters.

Although there is not enough evidence to support the accusations against Iran, the official position of the Iranian government and public media has been directly against the protesters, accusing them of being US, Israeli and Saudi agents.

Khamenei's Twitter account tweeted Oct. 6, "#Iran and #Iraq are two nations whose hearts & souls are tied together through faith in God & love for #ImamHussain & the progeny of the Prophet.… This bond will grow stronger day by day. Enemies seek to sow discord but they’ve failed & their conspiracy won’t be effective."

The Friday prayer leader of Tehran, Mohammed Emami-Kashani, also accused the United States and Israel of being behind the ongoing protests in order to interrupt the ceremony of Arbaeen (a Shiite observance that occurs 40 days after the holy day of Ashura), which will take place in about two weeks.

In line with Iran's view of the protests as a conspiracy, the head of Iraq's Popular Mobilization Units (PMU), Faleh al-Fayadh, said Oct. 7 at a press conference, “Some wanted worse things to happen to Iraq. They have already achieved [this] and they committed a crime. We will seek revenge against them [as a deterrent]. We cannot tolerate people who conspire against this country."

“PMU factions are ready to intervene to prevent any coup or insurgency in Iraq, should the government request,” Fayadh added.

The PMU factions are already in the streets taking part in confronting the protesters.

Continuation of the protests will likely lead the prime minister and his government to rely on the PMU more than ever, which would allow the PMU to further increase its influence in the Iraqi government.