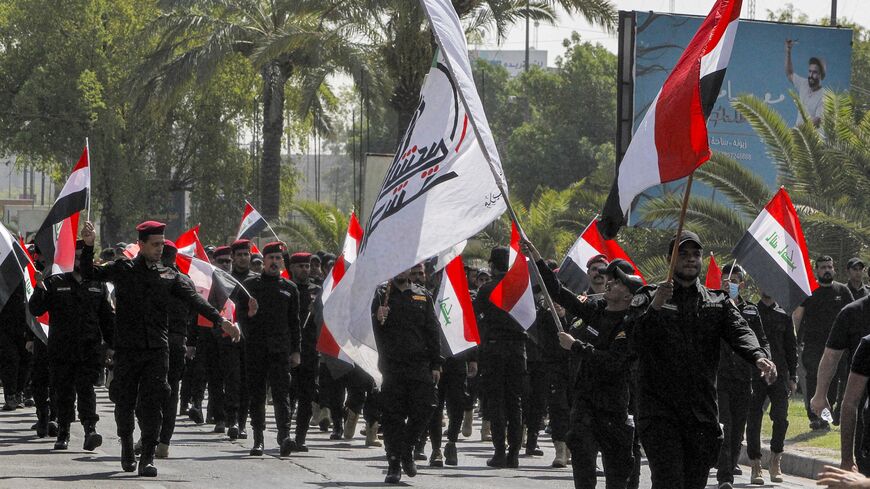 Members of Iraq's Popular Mobilization Units paramilitary forces march in a symbolic funerary parade in the capital, Baghdad, on June 29, 2021, in remembrance of those killed in a US raid against a PMU brigade backed by Iran. Pro-Iran forces have launched a number of attacks on US targets since. - SABAH ARAR/AFP via Getty Images

Hot take: Iran’s escalation in Iraq is all about timing… and it's likely to backfire

Timing is everything. Pro-Iran militias have launched five drone and rocket attacks on US bases in Iraq this week, injuring two in the most recent, as Ali Mamouri reports. The attacks by groups aligned with Iran put at risk the yet-to-be scheduled seventh and perhaps final round of talks in Vienna among the parties to the Joint Comprehensive Plan of Action (JCPOA) — the so-called Iran nuclear deal that, if successful, would bring both the US back in the deal and provide Tehran urgently needed sanctions relief.

Meanwhile, the International Atomic Energy Agency (IAEA), which overseas Iran’s compliance with the JCPOA, announced Iran is enriching uranium at 20% and proceeding with further production of uranium metal, steps toward development of a nuclear weapon. That’s a clear violation of previous JCPOA restrictions.

Three possible reasons why Iran is doing this now:

The illusion of leverage. Tehran may believe Washington is on defense in the region because the United States is scaling down and repositioning US Patriot missile defense batteries from the Gulf, and withdrawing from Afghanistan. Iran this week convened its own meeting of Afghan political parties.

Signaling on Iraq. Iraqi Prime Minister Mustafa al-Kadhimi has been committed to reining in those militias outside of Iraqi government control, and keeping Iraq from becoming a battlefield for US and Iran hostilities. The spokesman of the Iraqi commander in chief, Yahya Rasool, Wednesday referred to the attacks on US bases as terrorism and the militias launching attacks as "enemies of Iraq." With Kadhimi expected in Washington later this month, Tehran may be signaling Washington that it can influence events in Iraq, for better or worse.

Getting hot in Iran. Conflict is a well-worn diversion to domestic unrest. Iranians are dealing with an unprecedented electricity crisis as summer heat levels rise, leading to anti-government protests, as we report here. And despite the bravado, Iran may be worried about the apathy, low voter turnout and even blank ballots (see below) in the presidential election won by Ebrahim Raisi, who will take office Aug. 3.

Our take. Iran, it seems, can’t stick to script for what could otherwise be the diplomatic home stretch on a revived nuclear deal, which could be a windfall for its economy and a domestic political win for both outgoing President Hassan Rouhani and Raisi. This week State Department Spokesman Ned Price said the US window for diplomacy is not indefinite, and Iran should expect no leverage for its continued violation of IAEA safeguards per the JCPOA.  Iran may be misreading the Joe Biden administration if it believes the United States is negotiating with Iran out of weakness rather than strength, and if it believes provocative moves might buy it some leverage at the nuclear talks in Vienna. To the contrary: Iran’s behavior could push even US advocates of reentering the Iran nuclear deal to think again.

Iran’s blank ballots: a sign of protest that can’t be ignored

Sarbas Nazari has the story on how an unprecedented number of blank or invalid votes in Iran’s recent presidential election caught the ruling establishment off guard. The heavy favorite to win, Ebrahim Raisi, took home 62% of the vote. But coming in second at 13% were ballots that were left blank. Even Supreme Leader Ayatollah Ali Khamenei was forced to acknowledge what many observers have called protest votes but what he described as a contribution to the electoral process. “Those ballots were too many to be simply ignored,” writes Nazari.

Iraq’s hot summer may be worst ever

Iran is not the only country experiencing an electricity breakdown. Iraq’s electricity sector could experience its worst summer in years, which is saying something, given how bad these breakdowns have been previously. The electricity minister resigned last week amid pressure over repeated power outages across the country. Joe Snell explains how high temperatures, attacks on power transmission towers and supply cuts from Iran have led to power shortages across Iraq.

Meanwhile, the Iraqi military is calling on citizens to “be brave” and report individuals who are sabotaging the country’s transmission towers. As Mustafa Saadoun reports, the Islamic State is seen as the likely culprit, though the government is officially blaming “terrorist and subversive groups."

Across the impoverished Gaza Strip, children are attending summer camps run by the militant group Hamas. Entsar Abu Jahal writes that the annual military training camps are organized by Izz ad-Din al-Qassam Brigades, Hamas’ military wing, and are aimed at “mobilizing a generation of young people capable of fighting wars against Israel to liberate the occupied Palestinian territories.” A militant leader told Jahal that the camps are intended to send a message to Israel that Hamas is always preparing for the next battle.

Hamas isn’t the only Gaza-based militant group training children to fight. Rasha Abou Jalal spoke with children who attended a camp organized by the al-Quds Brigades, the military wing of the Islamic Jihad. Their training reportedly included learning to use firearms and how to conduct raids on Israeli military sites.

It was six years ago that some in Washington were calling for the Obama Administration to engage the Salafi group Ahrar al-Sham, a progeny of al-Qaeda which aligned with the Nusra Front, a designated Al-Qaeda linked group. Defections are now crippling Ahrar al-Sham, writes Sultan al-Kanj. A well-known Twitter account believed to that of a former jihadi leader in Syria reported last month that about 1,000 fighters, mostly commando and special forces, have abandoned the rebel group. Sources within the Turkish-backed Ahrar al-Sham have downplayed the numbers of dropouts and pushed back on rumors the group could dissolve.

As Brent crude’s price inches steadily upward, Sebastian Castelier takes a look at what higher oil prices might mean for post-pandemic Gulf economies that rely on oil exports. Could the improving fiscal situation provide a false sense of economic security? “The austerity push launched during the COVID-19 pandemic is still a hot topic of conversation for families in the Gulf as reforms start to weigh on the budget of households often accustomed to the government's largesse, tax-free high wages and generous subsidies,” Castelier writes.

Salwa Samir writes about Egyptian researcher who developed an organic substance to kill the termites that are eating away at the country’s ancient landmarks. Zien Eldin developed her termite treatment after visiting the medieval town of el-Qasr, only to find many of the 12th-century buildings had been damaged by termites. Eldin later tested her termite-killing product on affected areas at Saint Catherine's Monastery in the Sinai Peninsula after receiving a special request from the monks who run the UNESCO World Heritage site. The substance, which is free of toxic chemicals that harm the environment, will be available countrywide later this month.

ICYMI: ‘UAE momentum’ on rise in the Middle East

Dr. Abdulkhaleq Abdulla, a professor of political science in the United Arab Emirates, explains what’s behind the rise of the United Arab Emirate’s “soft and smart influence.” Plus, why he’s cautiously optimistic for Libya’s political future and how he rates the Gulf region’s handling of the pandemic. Listen to Abdulla’s wide-ranging podcast with Andrew Parasiliti here.

The COVID-19 pandemic aggravated many of the existing development challenges facing the Middle East and North Africa, leaving much of the region gripped by rising rates of poverty, soaring debts and a lack of trust in the state. The World Bank Group's MENA strategy suggests a two-prong approach for countries that involves addressing the immediate threats of COVID-19 while implementing structural reforms that promote job growth, advance gender equity, restore trust and encourage green growth. Learn more about the bank’s strategy here.