An Egyptian researcher has patented an organic substance to kill termites; a Japanese company funded her research and manufactured the product. 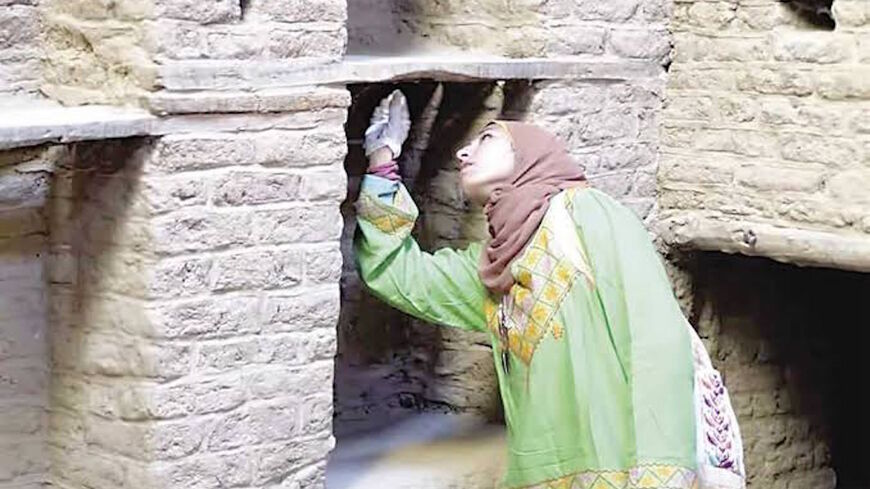 Egyptian researcher Nada Zien Eldin has patented an organic substance to kill termites, which have been causing damage at archaeological sites.

The story begins in 2019, when Zien Eldin visited the 12th-century Islamic city of el-Qasr in Dakhla Oasis in New Valley in the southwestern part of Egypt. She found that a lot of the wood in homes and buildings there was damaged. When she asked the tour guide what had caused this problem, he told her termites. His answer was a turning point in Zien Eldin's life.

The visit was part of her initiative on Facebook, “Let’s Explore Egypt,” which she founded in 2014 to tell Egyptians and foreigners alike about hidden touristic spots in the country.

“In summer 2019, when I was organizing a trip to El Qasr Islamic city, I found the wood was damaged everywhere. ... Some wooden pieces turned to powder on the ground. I asked the tour guide, who was busy telling us about the area’s history, about the reason for this damage. He said, 'Oh, all that happened because of termites,'” she told Al-Monitor in an interview.

His answer caused Zien Eldin to reflect on the situation and then vow to find a way to help save the city and other affected areas from termites.

Zien Eldin, 30, obtained a master’s degree in geography from the Faculty of Arts, Cairo University in 2016, and a diploma in archaeological restoration from Cairo University the following year.

“I have already studied in microbiology how dangerous termite is to wood, as it depends on cellulose for its food. But it was the first time I saw with my own eyes the great damage caused by termites,” she added.

After she returned from the Dakhla trip, she started to learn and read a lot about termites.

“Here in Egypt it is rare to hear about termites, but climate change plays a great role in its increase recently,” Zien Eldin said.

“People unfortunately believe that spraying chemicals is a solution to kill insects. In the case of termites, for example, people used chemicals on the affected antiquities, which unfortunately had a bad impact in the long run on the place and the residents living around it.”

She said termites live in environments that are warm and moist; such areas include New Valley governorate, Upper Egypt governorates and even the coastal city of Alexandria.

She prepared an in-depth study about how to find a treatment that eliminates the breeding of termites but does not use toxic chemicals that can harm the environment.

She is currently studying for a doctorate at Osaka Prefecture University School of Life and Environmental Sciences. She plans to finish her dissertation, “Environmental and archaeological changes — the effects of termites on the Dakhla Oasis, and the Qasr Islamic City,” by the end of this year.

“When I was in Japan, I learned that there are places badly affected by termites. After I succeeded in producing an organic substance to kill termites, the Japanese feedback was highly appreciated."

She pointed out that her product prevents termites for seven months then she would need to re-apply it again.

The Sumitomo Chemical Company, a Japanese business that has a branch in Cairo, funded and manufactured the organic substance. Zien Eldin applied it immediately in places she visited in Japan and those in Egypt.

“I went to El Qasr in Dakhla again but this time to spray the infected places. Alhamdulillah [praise be to God], the termites disappeared completely.”

She added that she also went to Saint Catherine's Monastery in the Sinai Peninsula upon a request from the monks there to apply her product in affected areas.

Her product is to be available to the public in Egypt by the end of July, she said, although the supplier is yet to be determined.

Regarding her Facebook initiative, “Let's Explore Egypt,” Zien Eldin said, “Without the trips I made through the initiative, I could not have found a solution to kill termites and save ancient sites.”

The Facebook group has 35,000 members. She has organized 170 trips in and out of Cairo and plans more, and invites more people to join and know more about the beautiful, historic places in the country.

“We are not organizing trips to known, famous tourist attractions such as Aswan and Luxor, for example, but we delve deeper to visit uncommon antiquities in the Upper Egyptian governorates of Minya, Assiut, Sohag, also in the port city of Rosetta, 65 kilometers [40 miles] east of Alexandria, and Fuwwah, 181 kilometers [112 miles] north of Cairo in the far north of Egypt, which houses 360 mosques.”

In February, along with her friend Shaimaa, Zien Eldin established Takiyyat Musafir — a cultural center for hosting artistic activities, selling handcrafts, organizing workshops on many culture-related activities and holding seminars given by specialists. It is in Darb El Ahmar, a historic neighborhood in Cairo. “I hope it will help raise residents' awareness about culture, history and arts,” Zien Eldin said.

She said she will soon establish another cultural venue with the same message in another area. “What I am making in my life is pouring into one pot — the love of Egypt.”