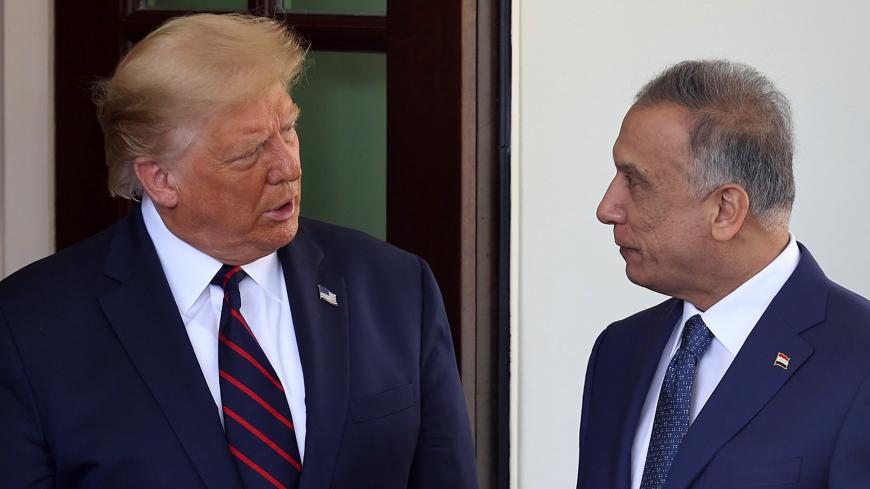 A week or so after his administration helped broker the normalization of UAE-Israel ties, US President Donald Trump was focused again on the Middle East, promising a new course in US-Iraq relations in a meeting with Iraqi Prime Minister Mustafa al-Kadhimi.

In introducing Kadhimi at the White House on Thursday, Trump referred to the prime minister as “a very highly respected gentleman all over the Middle East, and respected very much by our country, too.”

Kadhimi, also the head of Iraq’s National Intelligence Service, is an independent in a country thick with well-worn ethnic and sectarian political alliances and loyalties.

He assumed the premiership in May after two other candidates failed to muster support following the resignation of Prime Minister Adel Abdul Mahdi in November 2019.

Kadhimi took the job out of a sense of service, not entitlement. Upon taking office, he found nearly empty government coffers. His inbox included the COVID-19 pandemic, plummeting oil prices, nationwide protests demanding jobs and change and the intrusive role of Iranian-backed militias.

Although Kadhimi does not command a large or dominant political bloc, he has integrity, and that counts big time in Iraq. In order to pursue his reform agenda, he moves with an unusual combination of purpose, caution and consensus. And he is moving, pressing ahead with early parliamentary elections next year, and advocating political and economic reforms to secure Iraq’s future, including reining in rogue militias that attack US personnel, and assassins who kill activists and protesters, as Shelly Kittleson reports.

The prime minister of course has his critics and opponents among the various political blocs, some of those have already criticized his outreach to Washington.

Many in Iraq’s parliament, including his adversaries, are also his friends, relationships forged in the days of opposition to Iraqi dictator Saddam Hussein.

The protesters are giving Kadhimi a chance. Iraqis know Kadhimi is working for his country. You can disagree with his policies; you can’t question his motives.

Kadhimi’s partnership with Iraqi President Barham Salih, another independent champion of reform, has given Iraq the prospect and hope of change, with all the caveats that come amid Iraq’s many challenges at home and in the region.

Iraq as bridge, not battlefield

In the region, Kadhimi’s line is that Iraq should be a bridge, not a battlefield. Sovereignty is at the core of his message. Iraq’s borders must be respected. Regional scores to which Iraq is not a part should be settled elsewhere. His objective is to forge constructive relationships with all of Iraq’s neighbors.

Kadhimi has given priority to boosting ties with the Gulf Cooperation Council states. Expect further progress on Iraq-GCC electricity and energy investment and cooperation, which has advanced with US help. Iraq-GCC conversations might, and should, also address billions in debt forgiveness from neighboring Gulf states that date to the Iran-Iraq war more than three decades ago. While the Gulf states that made the loans aren’t asking for repayment, the loans remain on the books and a drag on the Iraqi balance sheet when Baghdad deals with international creditors.

In expanding ties with the Gulf, Kadhimi says he is not looking to take sides against Iran. He wants good and normal relations, and an end to militia attacks on US forces in Iraq. Kadhimi was in Iran earlier this month and was received by Supreme Leader Ayatollah Ali Khamenei and President Hassan Rouhani. Although Iran officially backs Kadhimi, its intrigues in Iraq are many.

Under Kadhimi, Iraq’s stock as a destination for investment has gone up. The prime minister said this week that Iraq is "open for business," and indeed some serious business was done in Washington this week. The United States put money on the table to show its commitment to Iraq.

US Secretary of State Mike Pompeo announced $204 million for food, clean water, and health care, an urgent boost to help Baghdad manage its dire economic crisis. In addition, $8 billion in energy deals were signed with US companies Chevron, General Electric, Honeywell, Baker Hughes, Stellar and others. These agreements will be noticed in the Gulf, as Iraq seeks to accelerate investment there.

US forces: Stay or go?

The United States and Iraq are managing the continuing presence of US forces in Iraq probably better than expected. The United States has about 5,200 troops in Iraq to combat the Islamic State, but also as a signal to Iran. The US troop presence is unpopular among certain constituencies in Iraq, and, for Kadhimi, can be both irritant and deterrent with regard to Iran. In the United States, American forces in Iraq, Afghanistan and elsewhere represent the "endless wars" that many on both the left and right wings want to bring to an end.

If the expectation was that the United States and Iraq would announce a timetable for withdrawal this week, then they had it wrong going in. But Kadhimi needed something to show his critics, and he and Trump found a kind of common ground. Kadhimi made clear that Iraq does not want the United States to participate in combat missions, but does seek a sustained "train and equip” and intelligence partnership to keep the heat on the Islamic State. Trump, for his part, said that he wants to eventually withdraw all combat troops. The Trump-Kadhimi joint statement following the meeting reaffirmed the long-term security partnership and shared interest in defeating the Islamic State.

Kadhimi’s position on US troops may not be enough for his political adversaries, as Ali Mamouri writes, but the Washington meetings reflected a shift in the US and Iraqi approach to security.

For Trump, as in the Middle East, relationships matter. He and Kadhimi hit it off, and that matters for how Trump does diplomacy.

“We have become friends,” Trump said. “I think our relationship now is better than ever before.”

There was a glimpse of how that might play out in calming a slide in Iraq-Turkey relations. Recent Turkish drone strikes in Iraq have killed Iraqi border guards, as Fehim Tastekin reports. Kadhimi termed the strikes "unacceptable," and Trump immediately volunteered that the Iraqi prime minister "has my ear" if he wanted Trump’s help with Turkish President Recep Tayyip Erdogan.

Perhaps the conversation will also continue about Iran, where the United States is seeking to maintain the UN embargo on arms sales. An escalation in US-Iran tensions is bad news for Iraq, making Kadhimi’s many challenges that much harder. Trump’s personal connection with Kadhimi, and the new US investment in Iraq, may allow Iraq to factor more prominently into how decisions on Iran may play out in Iraq.