US diplomacy during Iraqi transition sets tone for relationship. 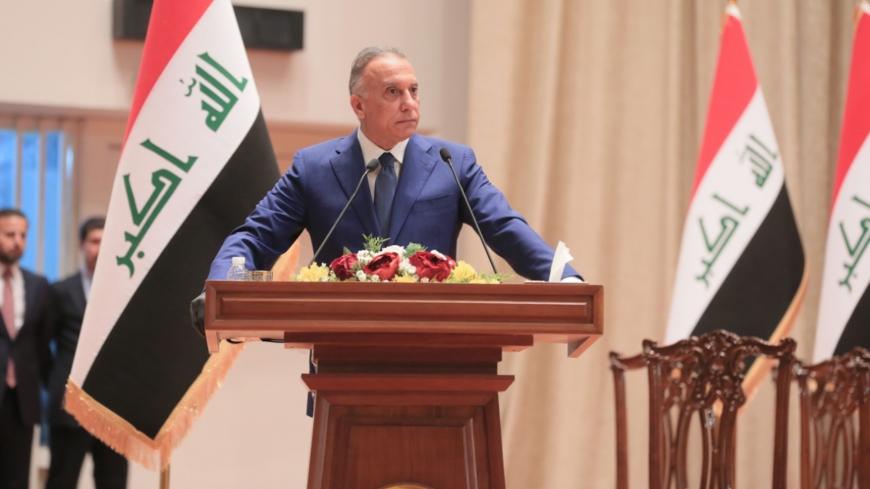 Mustafa al-Kadhimi, at Iraq's parliament in Baghdad for a vote of confidence that would make him prime minister, delivers a speech on May 6, 2020. - Iraqi Parliament / Anadolu Agency via Getty Images

The vote of confidence in Prime Minister Mustafa al-Kadhimi by Iraq’s Council of Representatives (the Iraqi parliament) this week has the feel of change.

His Cabinet is composed of technocrats and professionals, as Ali Mamouri explains. There is no sense of entitlement in Kadhimi and his team; they are there to do the business of Iraq.

Kadhimi’s priorities, also approved by the parliament, include dramatic and urgent economic reforms; implementation of a new electoral law; settling outstanding issues with the Kurdistan Regional Government (Dana Taib Menmy has the story); and “restricting weapons to state and military institutions,” meaning that all armed groups or Popular Mobilization Units must fall under authority of the state.

Iraq’s power brokers have gotten the message that a system that often appeared to be a division of the spoils won’t cut it anymore. The protests that began in October signaled what we called here the beginning of the end of the post-Saddam Hussein era. The mostly young and diverse protesters were no longer giving Iraq’s leaders a pass on governance, whatever their bona fides may have been in the struggle against the dictator decades ago.

Kadhimi benefits from strong ties with all of Iraq's constituencies and power centers, as well as the goodwill of Washington, Tehran, the Gulf and all key regional capitals. The protesters seem to be giving him space, for now, to implement his program. The new prime minister’s partnerships with Iraqi President Barham Salih and parliament Speaker Mohammed al-Halbusi — the so-called "three presidents" — are expected to be smooth and harmonious. All three know the immensity of the challenges and the stakes for Iraq.

US deft diplomacy during transition

The Trump administration played this transition as well as it can be played. The State Department offered a "strategic dialogue" with Iraq on April 7, two days before Salih designated Kadhimi to form a government, as Adnan Abu Zeed reported. In discussing Iraq last month, US officials praised Kadhimi, but steered short of an endorsement, making clear this was an Iraqi process. In the meantime, Kadhimi received the backing of Iran and the United Arab Emirates, among others, to form his government.

On April 27, as Kadhimi’s candidacy seemed to stall, the United States renewed a sanctions waiver for Iraq on Iranian electricity imports for only 30 days, another kind of signal that Iran was still front and center in US priorities in Iraq.

US Secretary of State Mike Pompeo was among the first to congratulate Kadhimi on May 6, extending the waiver to four months, through Iraq’s hot summer, and giving the prime minister some breathing room on a vexing issue.

Iraq has been seeking to lessen its dependency on Iranian electricity, including through an arrangement with the Gulf Cooperation Council via Kuwait, but this is a long term process, as Ali Hashem explains.

Despite the hopeful signs around Kadhimi’s transition, Iraq’s economic crisis is dire, its political institutions fragile and its security situation perilous. The risk of state collapse remains real. The US-Iraq strategic dialogue next month is as urgent as ever, and can and should be considered in regional context, along with Iraq’s own objectives.

Any good strategy involves some priority setting, so here are five:

First, in the realm of security, the Islamic State has launched a spate of attacks in regions it previously held, as well as in areas relatively close to Baghdad. The US-led coalition needs to intensify its engagement with Iraq to prevent a repeat of 2014. US troops will be essential, perhaps with NATO cover, to mitigate concerns among some Iraqis. The United States and Iraq can’t give IS any quarter. The conversation needs to start here.

Second, the United States is best placed to continue to assist Iraq in reforming its security institutions and training of its military forces, as outlined in this report by Ben Conable at RAND. US-Iraq military-to-military ties are well established and a strong foundation.

Third, the United States should consider Iraq a regional security hub and partner. Kadhimi’s program calls for an “integrated system of common and shared interests … to contribute effectively to resolving regional and international crises, combating terrorism, money laundering, and organized crime.” This type of regional security arrangement, focusing on counterterrorism and border security issues, and building on the work with the anti-IS coalition, can be part of the US-Iraq conversation.

Fourth, like the rest of the world, Iraq is reeling from the impact of COVID-19. Compounding that is the steep drop in oil prices, which amplified already dire economic conditions in Iraq. There is no forthcoming bailout, as the United States, Europe, and the Gulf oil producers are all going through the same thing.

Kadhimi’s governance plan includes dramatic steps for reform and diversification of Iraq’s economy away from oil, and developing other sectors, including agriculture.  The United States can assist, including in facilitating Iraq’s engagement with the International Monetary Fund, the World Bank and other international organizations. The long-term remedy for Iraq will require the types of public sector reforms — cuts in government employees, salaries and subsidies — that in the short run cause even more pain for citizens already experiencing hardship. The demands for transparency to battle corruption won’t be easy. The World Bank proposes shifting Iraq to a digitally based economy, and the United States can help, although this is a long game, involving partnerships to build Iraq’s educational and technological capacity.

Here, too, the United States can back an essential regional role for Iraq in meeting the economic crisis. In March 2019, Salih described his vision of an integrated region, both in the battle against extremism and as part of a “network of ‘interrelated interests’ such as regional railways, pipelines and free trade zones across Iraq’s borders with all of its neighbors.”

In an interview with Al-Monitor in September 2019, just days before the protests started, Salih spoke of the urgency for a regional dialogue on youth unemployment, job creation and reform of the health and education sectors. Now that is more true than ever.

Fifth, the United States and Iraq will of course talk about Iran. While Iraq knows that its future depends on weakening Iran’s hold on its political and economic life, it also knows that it cannot be a battlefield involving the United States and Iran. Kadhimi, Salih and other Iraqi leaders are not just giving lip service to "sovereignty." There is a post-sectarian, nationally focused Iraqi identity that is taking form. This distinctly Iraqi trend, which is a work in progress, is inclusive, mostly secular and often anti-Iranian. Iraq as a battlefield is among those outcomes that would facilitate state collapse.

For Iraq, at least in the short term, the challenge of Iran is managed, not solved. Iraq cannot and won’t put itself in conflict with Iran, and prefers good relations with its larger neighbor. The United States can and should understand that, keeping the conversation and pressure in confidence with Iraq’s leaders, rather than in public, and working with and through Iraq on how best to deal with Iran. Iraq, for its part, knows it is on notice that the United States won’t tolerate a threat to its interests or forces in Iraq. There is already a meeting of the minds on this.