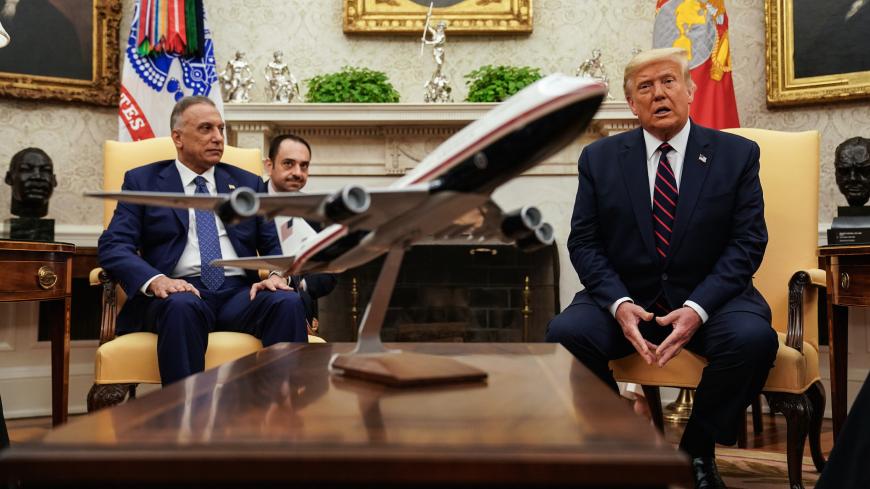 “We very much feel that if Iran should do anything, we will be there to help the Iraqi people,” US President Donald Trump told Iraqi Prime Minister Mustafa al-Kadhimi in their Aug. 20 meeting in Washington.

They not only refrained from setting a schedule for withdrawing US troops from Iraq, but affirmed the need for a continued US presence in Iraq.

“We definitely don’t need combat troops in Iraq, but we do need training and capacity enhancement and security cooperation,” said Kadhimi.

“We're committed to helping Iraq achieve economic prosperity, freedom from foreign meddling in its internal affairs and improve relationships with its neighbors as well,” Pompeo said, referring to Iran's influence and encouraging Iran rival Saudi in particular to open up with Iraq. “This is what the Iraqi people want, too: a stable, prosperous, independent Iraq.”

Kadhimi's visit has already resulted in several agreements. “We signed many contracts with American companies [worth] over $10 billion. Iraq is open for American business and investment for [a] better future for Iraq and [the] Iraqi people,” he said.

In a second round of US-Iraq strategic talks between the US secretary of state and his Iraqi counterpart, the two discussed a broad range of areas including energy, health, the environment, political issues, diplomacy, security, anti-terrorism, education and culture.

Pompeo also said the US Agency for International Development will provide about $204 million in humanitarian assistance for Iraq. “This assistance will provide critical shelter, essential health care, emergency food assistance and water, sanitation and hygiene services across Iraq. It will also improve access to civil documentation and legal services, the capacity of health care facilities and increase access to education and livelihood opportunities,” Pompeo said.

Kadhimi held separate meetings with the managing director of the International Monetary Fund, Kristalina Georgieva, and members of the US Chamber of Commerce. He emphasized that Iraq is serious about economic reform and combating corruption, asking the two bodies for more economic support for his government.

Kadhimi also received a phone call from Saudi Arabian Crown Prince Mohammed bin Salman, who is among the top US allies against Iran in the region. They discussed Iraq and Saudi cooperation in OPEC.

Kadhimi's visit to the United States was extended by a day upon US request for meetings with congressional committees and House Speaker Nancy Pelosi.

Kadhimi has had lengthy relationships with US Democrats in the previous administration, and has developed strong ties with Republicans as well in his role as director of the Iraqi National Intelligence Service since 2016.

There was no word about US troops leaving Iraq, angering the militias who are demanding the United States' full departure from Iraq. The two leaders' statements on the matter were very vague.

“So at some point, we obviously will be gone,” Trump said. “We look forward to the day when we don’t have to be there, and hopefully Iraq can live their own lives and they can defend themselves, which they’ve been doing long before we got involved.”

It's clear that the independent Iraq free from foreign involvement Trump hopes for will not happen anytime soon, as Kadhimi clearly expressed his willingness to see US troops to stay longer in Iraq.

“We need the support of the United States,” Kadhimi said to the journalists in the White House. “The war against [the Islamic State] is over, but sleeper cells for [IS] and other terrorist groups are still there.”

Shiite militias and their affiliated political parties had sought Kadhimi's assent to the complete departure of US troops from Iraq.

Kadhimi had a special meeting with the Shiite militas attended by Iran's Quds Force commander, Ismail Ghaani, prior to leaving for Washington. The prime minister assured them that he is working on US troops' full departure from Iraq, Al-Monitor learned from a source who attended the meeting.

A group of the militias issued a statement Aug. 20, attacking the prime minister for “breaking his promise,” allowing the US president to “dictate its orders, and to pave the road for US to continue expanding domination on the region and stealing Iraq wealth.”

They slammed him for ignoring the Iraqi parliament vote early this year for expelling US troops and for not protecting Iraq sovereignty by allowing US troops to stay in the country.

They also threatened to increase their attacks against US troops and interests. A group of Iraqi lawmakers affiliated with the Shiite militias has asked for a special parliamentary session to discuss Kadhimi’s failure to eject US troops from the country.

Former Iraqi Prime Minister Nouri al-Maliki has attacked Kadhimi, saying his trip was ineffective and calling for expanding ties with Russia rather than the United States.

Even before Kadhimi's return to Iraq, the Shiite militias resumed attacks against US interests there after a brief pause to allow Kadhimi to ask US troops leave peacefully.

Sabereen News, one of the main PMU media outlets, announced Aug. 21 that a US military convoy had been attacked in the Owairig area, 25 kilometers (16 miles) south of Baghdad. Soldiers protecting the convoy clashed with the militants, resulting in the killing of three Fijian nationals.

The news has yet to be confirmed by the United States.

Assassinations and abductions of protesters increased during Kadhimi's visit, a sign of the militias' dissatisfaction with Kadhimi.

In the background of Kadhimi's visit, the United States is pushing to activate snapback sanctions against Iran. Trump officially proposed to the UN Security Council on Aug. 20, the day of his meeting with Kadhimi, that the sanctions be reimposed.

Despite the criticism from militias and groups backed by Iran, Kadhimi will return bearing messages of renewed US confidence and respect for Iraq. The humanitarian and energy deals speak to short- and long-term needs. Kadhimi made his preference for an end to US combat missions clear, and Trump said he also wants troops to leave eventually, showing that the message was received in Washington.