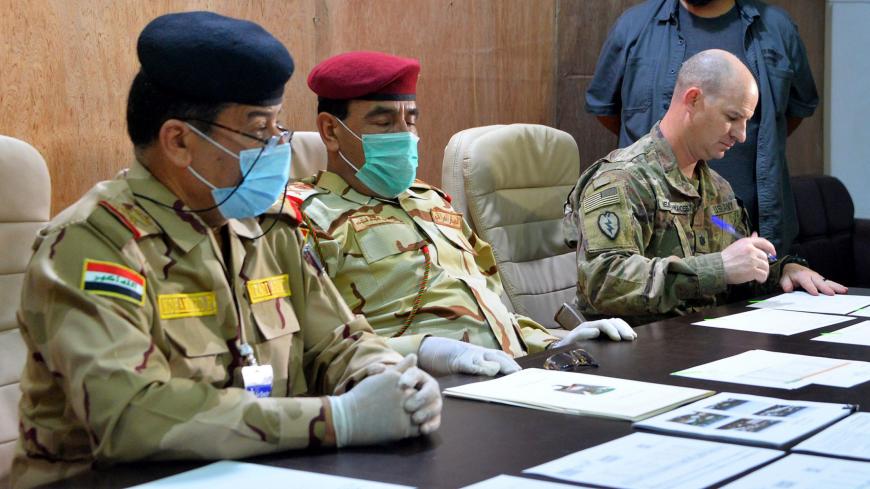 US Army base commander Lt. Col. Jace Neuenschwander (R) signs a document while at a table with Iraqi Ninevah operations commander Maj. Gen. Noman Zawbai (C) and Iraqi Staff Maj. Gen. Mohammad Fadhel Abbas (L) during a handover ceremony at a base for the Combined Joint Task Force Operation Inherent Resolve, the US-led coalition against the Islamic State, in Mosul during a handover ceremony to Iraqi forces on March 30, 2020. - ZAID AL-OBEIDI/AFP via Getty Images

The Biden administration will engage in its first round of so-called strategic dialogue with Iraq’s government in April, the White House confirmed Tuesday.

“This will be an important opportunity to discuss our mutual interests across a range of fields from security to culture, trade, and climate,” read a statement from White House press secretary Jen Psaki.

“The meetings will further clarify that coalition forces are in Iraq solely for the purpose of training and advising Iraqi forces to ensure that ISIS cannot reconstitute,” Psaki added. ISIS is an abbreviation for the Islamic State.

Earlier Tuesday, The Associated Press cited three anonymous Iraqi officials as saying their government had reached out to US Ambassador Mathew Tueller with a request to renew the discussions next month.

The discussions follow previous rounds of dialogue held in August and June of last year with the Trump administration.

The United States withdrew additional troops from Iraq and agreed to broaden support for Iraq's energy sector amid the previous talks.

Why it matters: Iraqi Prime Minister Mustafa al-Kadhimi has described the renewal of dialogue as a chance to push for the removal of the United States' roughly 2,500 troops remaining in Iraq.

“We achieved in a very short period what weapons failed to achieve,” Kadhimi said last week in reference to last year’s talks. “In a matter of months, we succeeded in reducing the size of US combat forces in Iraq by 60%,” the prime minister said.

“Soon we will begin the third phase [of dialogue] so that we can discuss the redeployment of [US] forces outside of Iraq.”

Iraq’s parliament then passed a nonbinding resolution to expel US forces from the country. Later, Secretary of State Mike Pompeo threatened to withdraw troops if rocket attacks by suspected pro-Iran militias were not reined in by Iraq’s security forces.

Widespread demands that the United States fully withdraw from Iraq have softened, although calls from some members of the pro-Iran Fatah bloc in parliament have continued. Kadhimi’s government has so far avoided that outcome. Trump further reduced the number of US troops in the country to 2,500 before leaving office in January.

The US forces that remain in Iraq are part of the US-led multinational coalition to defeat the Islamic State. Last year those coalition forces transitioned from assisting Iraqi troops with operations and tactical training, to senior-level advising and mentoring of Iraqi commanders.

What’s next: The Biden administration is unlikely to pull the remaining US forces from Iraq just yet, but may use the talks to recalibrate its troop presence in order to support the planned expansion of NATO's training mission in Iraq.

NATO Secretary-General Jens Stoltenberg announced last month that the alliance would significantly expand its presence to 4,000 advisers and training personnel as the coalition's presence has contracted following the territorial defeat of the Islamic State in 2019. 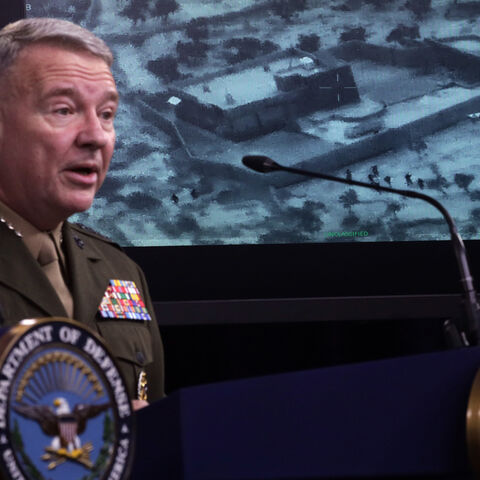