The US military has no orders to withdraw from Iraq, officials say, following meeting of White House Middle East Coordinator with Iraqi Prime Minister. 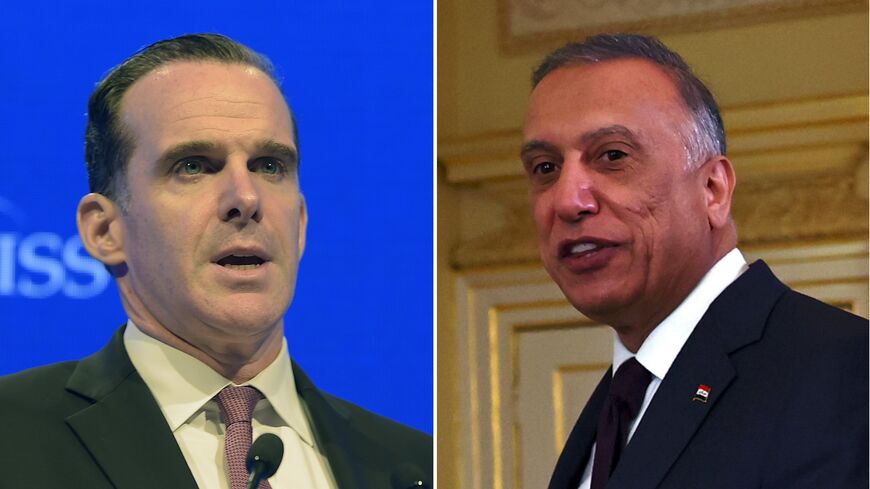 There was some confusion Thursday about possible plans by the US-led military coalition against the Islamic State to withdraw more forces from Iraq.

Brett McGurk, the White House’s coordinator for Middle East policy, met Thursday with Iraqi Prime Minister Mustafa al-Kadhimi, who heads to Washington later this month. Kadhimi’s office said in a statement that they discussed “mechanisms for withdrawing combat forces from Iraq and moving to a new phase of strategic cooperation” between their countries.

BBC reporter Nafiseh Kohnavard cited anonymous Iraqi officials as saying McGurk relayed a message “that US troops would withdraw from Iraq” in a step-by-step process according to a timeline to be determined during Kadhimi’s visit to Washington.

But two US officials speaking on condition of anonymity denied the report, citing no change in US policy. A third official, also speaking not for attribution, said McGurk’s comments to Kadhimi may have been misconstrued.

But the denials rang as a possible distinction without a difference, as the eventual withdrawal of US troops from Iraq has been a subject of recurrent discussions between the two governments.

Some 2,500 US troops — largely military advisers and brigade security teams — remain in the country in the wake of the war against the Islamic State. Some 900 others remain in Syria as part of the same mission, according to the Pentagon’s public statements.

The US-led coalition significantly reduced its footprint in Iraq last year, handing over eight bases to the Iraqi military and consolidating at sites in Baghdad, Erbil and Anbar province after withdrawing a few thousand troops.

Further adjustments to the US military presence in Iraq are likely to be on the table in the coming months, but a full withdrawal is not expected, a fourth US official told Al-Monitor on condition of anonymity. “It won’t be anything like Afghanistan,” said the source, referring to the hasty US and NATO departure from that country as Taliban fighters violently advance.

The defense official told Al-Monitor that the US-led coalition has not been given orders to draw down its presence in Iraq as of Thursday.

Last year’s consolidation did not stop suspected pro-Iran militias from continuing to launch rocket barrages and, more recently, drone attacks against bases used by American personnel. Retaliatory US airstrikes, which the Biden administration has billed as “defensive,” have also failed to deter the attacks.

The off-and-on fighting has reignited debate in Congress over the president’s war authorities.

Kadhimi is under significant pressure from pro-Iran factions and militias, many backed by Tehran’s Islamic Revolutionary Guard Corps (IRGC), to expel the remaining American troops.

Iraq’s parliament last year passed a nonbinding resolution to oust the US military from the country. That vote came after the assassination of Iranian Maj. Gen. Qasem Soleimani, the commander of the IRGC’s Quds Force, in Baghdad on orders from President Donald Trump. The de facto head of Iraq's Popular Mobilization Units, Abu Mahdi al-Muhandis, and other personnel were also killed in the strike.

Following the previous round of talks with Kadhimi’s government in April, the two sides released a joint statement acknowledging that the coalition’s transition to an advising role last year enabled “the redeployment of any remaining combat forces from Iraq, with the timing to be established in upcoming technical talks.”

It remains unclear what troops that statement referred to, as the US-led coalition has long said it does not have combat troops in Iraq.

The top commander of US forces in the Middle East said in April that he does not foresee a complete withdrawal of all US military personnel from Iraq. “That move is not contemplated,” Gen. Kenneth “Frank” McKenzie told the House Armed Services Committee.

McKenzie acknowledged that Central Command would be capable of conducting strikes against IS from outside Iraq if ordered to leave the country in the future.

However, former officials say a full US withdrawal from Iraq could force Washington to pull its roughly 900 troops out of Syria, a prospect that two senior US officials publicly dismissed just three weeks ago.

The coalition’s presence in Syria could potentially be sustained “on a shoestring” if some US forces were to remain in Erbil in Iraq’s Kurdistan region, a former senior State Department official told Al-Monitor on Thursday, adding that such a scenario is unlikely anytime soon.

NATO has agreed to increase its separate training mission in Iraq to some 4,000 personnel to help offset the US drawdown in Iraq. Those personnel will likely require continuing US military logistical support, Al-Monitor previously reported.