US CENTCOM commander discusses security ties in visit to Iraq

The visit of US Central Command Gen. Frank McKenzie to Baghdad this week comes as the United States restructures and consolidates force posture while bringing in more NATO advisers. 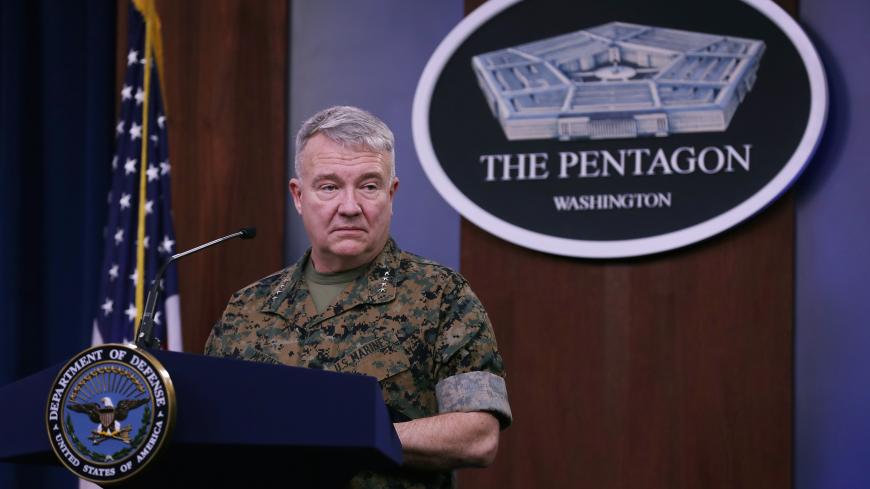 Marine Corps Gen. Frank McKenzie, commander of the US Central Command, talks to journalists about the military response to rocket attacks in Iraq that killed three service members — two from the United States and one from the UK — during a news briefing at the Pentagon, March 13, 2020, in Arlington, Virginia. - Chip Somodevilla/Getty Images

Head of United States Central Command Gen. Frank McKenzie, after meeting with Prime Minister Mustafa al-Kadhimi in Baghdad, told reporters he is “confident” the Iraqi government will request that some US forces remain in the country.

“The government of Iraq recognizes the true value that the coalition brings to the fight against Daesh (another name for ISIS) in Iraq, and I believe that going forward, they're going to want us to be with them,” McKenzie said.

The statement comes as the US and Iraq prepare for another round of dialogue on the future of US troop presence in Iraq, where they have been leading the international coalition against Islamic State since 2014.

McKenzie described an enduring yet perhaps smaller US footprint, adding that the United States may reduce its forces over time "as the Iraqis get better at what they do" and the United States continues to hand off more responsibility.

The US-led coalition is also bringing new international military advisors into Iraq as part of a restructuring as the US consolidates its operations in the country.

Thirteen coalition countries have responded to a request by the coalition’s American commander to contribute advisers, some of whom have already replaced international military trainers who departed Iraq earlier this year due to the COVID-19 pandemic, coalition spokesman Col. Myles Caggins told Al-Monitor by phone.

The arrivals come as the coalition shifts the focus of its mission in the country to mentoring senior Iraqi commanders via a central location in Baghdad at the Joint Operations Command Center, which is being retrofitted and dubbed the Enhanced Joint Operations Center.

“Instead of doing the work in Kirkuk, Mosul, al-Qaim, Taqaddum, all of that advisory work is done now in Baghdad,” Caggins said.

The coalition withdrew from six bases in those and other areas earlier this year, handing them over to Iraqi military commanders in the provinces while pulling international troops back to larger garrisons such as Camp Taji, Erbil and Ain al-Asad airbase.

The decision to consolidate was made last year as Iraq’s military increasingly showed its ability to manage IS' battered insurgency. The move was hastened by the coronavirus pandemic and continued rocket fire, which the United States has blamed on Iran-linked militias.

With fewer bases to manage, protect and supply, officials decided to centralize the Iraq branch of the counter-IS mission in Baghdad while transitioning to advising the higher levels of the Iraqi military, Caggins explained.

At a change-of-command ceremony in Baghdad last week, the coalition’s Task Force-Iraq handed off its mission to the incoming Military Advisory Group, led by US Marine Corps Brig. Gen. Ryan Rideout. Like his predecessor, Rideout will answer to the coalition’s commander, US Army Lt. Gen. Pat White.

Until it was relieved last week, Task Force-Iraq was built around a US Army Brigade Combat Team. The Military Advisory Group will be smaller than Task Force-Iraq, freeing up the brigade commander, Col. Phillip Kiniery of the US Army’s 82nd Airborne, to focus on other tasks.

“This is operational advising. This is a bunch of officers sitting around a map planning the next wide-scale counter-ISIS operation,” Caggins said.

For the first time since the US-led coalition intervened against IS in Iraq in 2014, Iraqi liaison officers from the provinces will be assigned dedicated advisers in Baghdad. Teams will be made up of about a dozen coalition military advisers each, Caggins said.

White hinted at the transition in a call with reporters last month. So far, 13 out of the roughly 30 coalition countries that contribute militarily have agreed to send advisers, Caggins said. “Some are here, some are on the way,” he said. “It wasn’t really a hard sell.”

The transition is not without risks. The base consolidation raised concerns earlier this year of a possible IS resurgence in Iraq, as pulling out of the provinces reduced the coalition’s intelligence gathering capabilities and available artillery support for the country’s security forces.

Bringing Iraqi provincial officers to Baghdad will help compensate for that, Caggins said. “They can then leverage all the support, logistics, joint intel from there,” he said.

Air and intelligence support continues, but the coalition has already largely stopped tactical training and accompanying Iraq’s security forces on ground missions, with the exception of special operations.

But some experts say centralization will come at a cost. “You’re not going to know what you don’t know, because you’re not there anymore,” said Michael Knights, a senior fellow at the Washington Institute for Near East Policy.

“You won’t know the command climate in the [provincial] headquarters, you won’t know how accurate their statistics are,” Knights told Al-Monitor by phone.

Yet Knights said the model appears to be working so far. “What we’ve got right now is probably fit for purpose. I think they’re being quite economical and innovative.”

No decision has yet been announced on the future of the roughly 5,200 American troops in Iraq as part of the coalition. Caggins told Al-Monitor that number is likely to be reduced in the weeks and months ahead. Officials have also said NATO’s separate advising mission in Iraq could potentially be increased to help offset any changes.

US and Iraqi officials are scheduled to hold another round of dialogue on the matter late this month. If Iraq’s government allows US forces to stay, the number of troops that remain is largely up to Washington.

McKenzie said Tuesday in Baghdad that he does not think the Iraqi government will not request a full US withdrawal. “I don't sense there's a mood right now for us to depart precipitously,” McKenzie told reporters after meeting with Kadhimi in Baghdad. “They’re going to want us to stay.”

In May, White pointed to IS’ failed Ramadan offensive to argue that the group is no longer capable of controlling towns and villages. “We just need to finish the insurgency,” McKenzie said Tuesday.