More than 2,000 US troops to leave Iraq in September, CENTCOM says 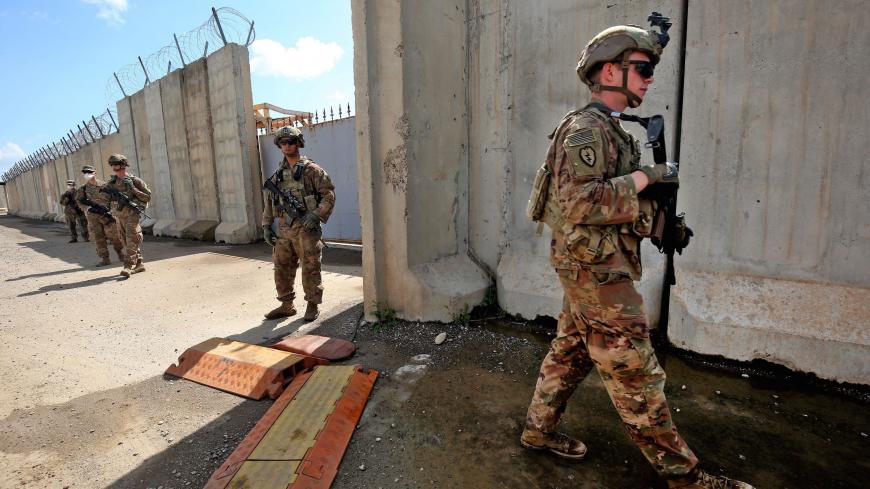 US army soldiers, part of the Combined Joint Task Force Operation Inherent Resolve (CJTF-OIR), the US-led coalition against the Islamic State, walk around at the K1 air base northwest of Kirkuk in northern Iraq before a planned US pullout on March 29, 2020. - AHMAD AL-RUBAYE/AFP via Getty Images

The commander of US forces in the Middle East on Wednesday formally announced a long-expected reduction of the number of US troops in Iraq, from more than 5,000 to some 3,000.

“In recognition of the great progress the Iraqi forces have made and in consultation and coordination with the government of Iraq and our coalition partners, the United States has decided to reduce our troop presence in Iraq from about 5,200 to 3,000 troops during the month of September,” CENTCOM commander Gen. Kenneth “Frank” McKenzie said during a coalition change-of-command ceremony in Baghdad.

“This decision is due to our confidence in the Iraqi Security Forces’ increased ability to operate independently,” McKenzie said, according to a readout of his statement provided to Al-Monitor.

The drawdown announcement comes three weeks after Iraq’s Prime Minister Mustafa al-Kadhimi visited Washington to discuss the United States’ security and economic relations with Iraq now that the Islamic State (IS) has been reduced to scattered sleeper cells.

McKenzie hinted in July at his openness to a drawdown in Iraq, saying he believed the US-led coalition could continue to contain IS with fewer forces in the country. The CENTCOM commander has expressed confidence that the remnants of IS can no longer seize and hold territory.

"This is a result of a lot of hard work by both countries, and the coalition, over many years," former Deputy Assistant Defense Secretary for Middle East Affairs Michael Mulroy told Al-Monitor by phone.

"It is critical that we maintain enough of our forces in Iraq to ensure that ISIS can never again regain its territory in Iraq or Syria. There were too many sacrifices by both countries to allow that to happen," said Mulroy, now a security analyst for ABC News.

"We also need to maintain our strong relationship with the Iraqi military to help counter Iran's influence in Iraq."

Earlier this year, the US-led multinational coalition in Iraq began withdrawing from satellite bases to consolidate its main effort at a headquarters in Baghdad and at other larger bases.

The transition was long-planned, the coalition said, but was accelerated by the coronavirus pandemic and harassing rocket fire by suspected Iran-linked militias.

One of the fusillades nearly drove the United States and Iran to the brink of war, Secretary of the Army Ryan McCarthy acknowledged Wednesday.

A rocket strike that killed an Iraqi-born American contractor at the K1 air base near Kirkuk in December led to a see-saw of retaliation that culminated in US President Donald Trump ordering the assassination of Iranian Maj. Gen. Qasem Soleimani in a drone strike near Baghdad International Airport.

Iran responded with ballistic missile barrages that caused concussive brain injuries to more than 100 US military personnel in Iraq.

US officials have urged their Iraqi counterparts to carry out reforms in the country’s security, with particular emphasis on bringing Hashid Shaabi militias under Baghdad’s direct control.

The progress of that reform is not tied to US decisions regarding its troop presence in Iraq, US Deputy Assistant Secretary for Iraq David Copley said last month. The decision to reduce the US component of the coalition’s presence is ultimately a political one, military officials have said.

Late on Tuesday, a senior US official told reporters aboard Air Force One that Trump would announce the drawdown from Iraq on Wednesday, Reuters reported.

Trump is facing reelection and has promised to end US involvement in what he calls “endless wars,” though US coalition forces no longer regularly accompany Iraqi troops on counter-IS operations.

The Pentagon also plans to reduce the US troop presence in Afghanistan by roughly 50% by November, Defense Secretary Mark Esper said last month. The official aboard Air Force One on Wednesday also said Trump was set to make an announcement on that drawdown in the coming days.

Trump deferred to Secretary of State Mike Pompeo last month when asked if the White House had a timeline for the reduction of US troops in Iraq.

“As soon as we complete the mission,” Pompeo said. “The president’s made very clear: He wants to get our forces down to the lowest level as quickly as we possibly can. That’s the mission he’s given us, and we’re working with the Iraqis to achieve that.”

“At some point, we’ll obviously be gone,” Trump told reporters after meeting Kadhimi. “We look forward to the day when we won’t have to be there.”