Intel: US plans to reduce troops in Iraq

The Pentagon plans to reduce its current troop presence in Iraq by about one-third as President Donald Trump heads for November's vote on his reelection amid a campaign promise to end US military involvement in conflicts abroad. 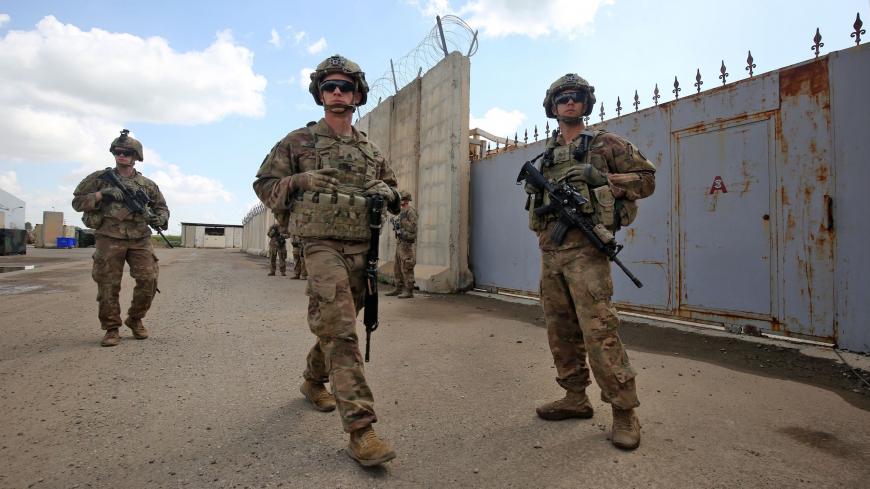 US army soldiers, part of the US-led coalition against the Islamic State, walk around at the K1 air base northwest of Kirkuk in northern Iraq before a planned US pullout, on March 29, 2020. - AHMAD AL-RUBAYE/AFP via Getty Images

The Pentagon plans to reduce its current troop presence in Iraq by about one-third as President Donald Trump heads for November's vote on his reelection amid a campaign promise to end US military involvement in conflicts abroad, the Wall Street Journal reported today, citing anonymous US officials.

The reductions are scheduled to take place over the next two to three months, the report said.

Trump is likely to publicly mention the troop reduction soon. A spokesperson for the US-led coalition did not immediately return a request for comment.

Why it matters: Any US drawdown is ultimately a political decision, military officials say, but it is also a sign that the international military coalition’s mission to defeat the Islamic State (IS) is entering its final phase.

A reduction to 3,500 troops would be a significant decrease from the estimated 5,000 troops in Iraq. The commander of US forces in the Middle East, Gen. Kenneth “Frank” McKenzie, said last month he believes the United States can help maintain stability in Iraq with fewer troops in the country.

Trump has ordered a drawdown in Iraq that can take place as quickly as possible while still maintaining policy objectives, US officials have said.

Trump has also ordered troop levels in Afghanistan to be cut ahead of November. Defense Secretary Mark Esper said earlier this month that number will go from some 8,600 to below 5,000 troops in Afghanistan.

That plan comes despite reports by US military officials that the Taliban is not living up to expectations under a peace agreement reached with the United States in February.

The president has long expressed his desire to end US involvement in “endless war,” although US troops in Iraq no longer accompany Iraqi troops on counter-IS ground operations.

The coalition consolidated its basing in Iraq earlier this year and has shifted to focusing on mentoring Iraqi military commanders at a central location in Baghdad.

What’s next: US Secretary of State Mike Pompeo said last week that US troops would come out of Iraq “as soon as we complete the mission.”

Though IS sleeper cells remain in a number of areas in Iraq, US military officials continue to express confidence the group cannot take and hold territory.

Iraq’s government has also struggled to establish control over a variety of Iran-linked militias in the country. US forces are not authorized to engage those militias, except in self-defense.

US Deputy Assistant Secretary for Iraq David Copley told Al-Monitor during a telephone briefing this week that Iraq’s domestic security sector reforms are “basically unrelated to any sort of US troop presence there.”

Still, a troop reduction is likely to reduce Washington’s leverage against Iran’s influence in Iraq, which the Trump administration is now looking to compensate for with soft power.

Though tensions have eased with Iran, McKenzie said last month that he draws “no confidence from periods of quiet,” and that he believes Iran still hopes to expel US forces from Iraq. In neighboring Syria, a major US drawdown last year has led to more aggressive provocations by Russian and Syrian regime troops.