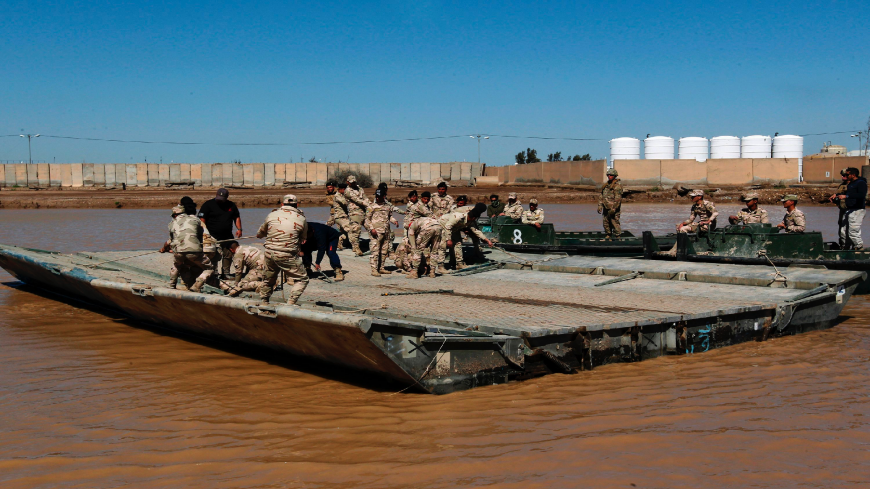 International coalition forces and Iraqi soldiers install a floating bridge at the Taji camp, north of Baghdad, during a training session ahead of installing replacement bridges in Mosul, on March 6, 2017. - SABAH ARAR/AFP via Getty Images

The US-led multinational military coalition against the Islamic State (IS) handed full control of another base to Iraqi security forces over the weekend.

Camp Taji, just a dozen miles north of the capital, is the eighth site yet turned over to Baghdad’s forces amid the coalition’s consolidation following the capture of IS’ last remaining territory last year.

“For the past six years, Camp Taji has served as a primary installation for coalition partners to train the Iraqi army, Iraqi air force, and the [special forces],” deputy coalition commander Maj. Gen. Kenneth Ekman said in a statement.

“From this day forward, the [Iraqi security forces] will take full responsibility for the facilities and programs at Taji and continue to use the site to lead and conduct training as part of the mission to defeat Daesh [IS] remnants,” Ekman said.

Taji is also the costliest facility returned to full Iraqi control. The coalition said it invested some $347 million in the site, including equipment, aircraft shelters and a renovation of the base’s runway.

The base has been home to as many as 2,000 coalition personnel, most of whom left over this summer, according to the statement.

Entering its final stage, the coalition is focusing on mentoring Iraq’s commanders at the Union III base in Baghdad’s more secure Green Zone, rather than training Iraqi forces at satellite bases throughout the country.

The long-planned consolidation was hastened by harassing rocket fire by suspected Iran-linked militias and by the coronavirus pandemic, the coalition has said.

Taji has been repeatedly targeted with rocket fire. More than a dozen people were injured and three coalition-linked personnel — including two US soldiers and a UK soldier — were killed in a March rocket strike on the Taji base.

A previous rocket strike on a shared base near Kirkuk killed an American contractor late last year, bringing Iran and the United States to the brink of conflict in Iraq.

Following a meeting with Iraqi Prime Minister Mustafa al-Kadhimi in Washington last week, US President Donald Trump said US troops in Iraq would be “leaving shortly,” but deferred to Secretary of State Mike Pompeo when asked about a timeline.

“As soon as we complete the mission,” Pompeo said.

US military officials have told Al-Monitor that they expect US troops to remain in Iraq, though ultimately whether they do and for how long is up to the White House.

The top commander of US forces in the Middle East Gen. Kenneth “Frank” McKenzie has said the coalition can maintain pressure on IS' scattered sleeper cells with fewer American personnel in Iraq.