US to reduce troops in Iraq but not Syria, official says 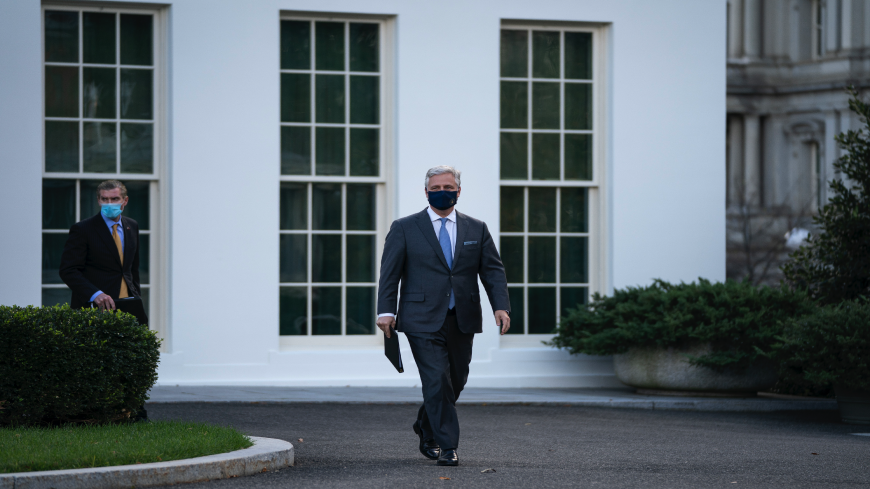 National security adviser Robert O'Brien arrives to speak to reporters outside the West Wing at the White House on Nov. 17, 2020, in Washington, DC. O'Brien announced that President Donald Trump has ordered 2,500 US troops to be withdrawn from Afghanistan and Iraq by Jan. 15. - Drew Angerer/Getty Images

A White House decision to reduce the US military’s presence in Iraq to some 2,500 troops by mid-January will not affect American-led operations in Syria, a senior defense official said today.

Newly appointed Acting Defense Secretary Christopher Miller formally announced plans at the Pentagon on Tuesday afternoon to further scale back troop levels in Iraq and to roughly halve the number of US military personnel in Afghanistan.

The move is widely seen as allowing President Donald Trump — who lost his reelection bid earlier this month — to claim he fulfilled a campaign promise to disentangle the United States from foreign conflicts.

But US counterterror operations with Iraqi and Afghan security forces and cooperation with coalition and NATO allies will continue in both countries, Miller affirmed Tuesday.

Moreover, the drawdown in Iraq will not affect US activities in Syria, where a residual force of some 900 US Special Operations troops continues to function as a de facto peacekeeping force on top of its official mission of guiding local Kurdish-led fighters in counterterrorism operations against the remnants of the Islamic State (IS).

“The military officials, the chairman and the commanders in theater do not see a negative impact for our posture in Syria,” a senior defense official told reporters on Tuesday of the decision to pull roughly 500 additional troops from Iraq, according to official numbers.

“And that was a large part of the decision-making process for us to go to that number, because if they felt otherwise — that it would negatively impact our efforts in Syria — we would not have drawn down to that number,” the senior official said on the condition of anonymity.

The US forces that remain in Syria rely heavily on logistics from coalition forces in nearby Iraq.

They have also been repeatedly harassed by Russian forces and local pro-regime militias over the past year, leading US Central Command (CENTCOM) to redeploy armored Bradley fighting vehicles to help guard coveted oilfields that financially benefit the Kurdish-led Syrian Democratic Forces.

The United States already scaled down its presence in Iraq this year, as the international coalition against IS transitioned to mentoring Iraq’s military commanders at a central location in Baghdad.

A draft order for CENTCOM to begin preparing to further reduce troop levels in Iraq and initiate a significant drawdown in Afghanistan circulated at the Pentagon on Monday. The New York Times reported nearly all of the roughly 700 Special Operations Forces in Somalia would also withdraw.

Pentagon officials declined on Tuesday to comment on plans for Somalia, where US Special Operations Forces are training the fragile Somali government’s soldiers to fight Al-Shabaab, al-Qaeda’s local franchise. A spokesperson for the Somali government did not return Al-Monitor’s request for comment by publication time.

Word of the Joint Staff’s draft order came after Miller hinted at likely troop drawdowns in a cryptic memo on Friday night to the Defense Department.

Miller’s message came after Trump fired Defense Secretary Mark Esper earlier this month and replaced other senior civilian officials at the Pentagon with perceived loyalists, leading to concerns that one of the last lines of defense against the president’s impulsive foreign policy orders had been removed.

But current and former officials who have worked closely with the new Pentagon chief told Al-Monitor his reputation as a serious military and national security professional sets him apart from the other appointees.

His role in the NSC also made him central to the Delta Force raid that led to the death of IS leader Abu Bakr al-Baghdadi last October. One former senior US official likened Miller’s rise from a deputy assistant secretary position in January to acting defense secretary to “going from a colonel to a four-star general.”

The new Pentagon chief spent his first days in office consulting with US allies about the decision to reduce troops in Iraq and Afghanistan, officials said Tuesday. Miller also spoke with Iraqi leaders and Afghanistan’s President Ashraf Ghani as well as senior members of Congress on Tuesday.

“It was not a surprise to any of our allies or partners, this decision. And none of them tried to dissuade us from this decision,” the official said. "We could not have been more warmly received."

National security adviser Robert O’Brien told reporters at the White House he had also spoken to NATO Secretary-General Jens Stoltenberg, who warned earlier on Tuesday that an “uncoordinated” withdrawal from Afghanistan could have dangerous consequences for allies and the Afghan government.

In the past two years, Trump has twice ordered all US forces to immediately withdraw from Syria without first consulting with US allies.

Both orders sent US diplomatic and military officials scrambling to stall the pull-out in hope of preserving post-IS stabilization efforts and protecting the lightly armed Syrian Democratic Forces from a potential multifront attack by Turkey and the Assad regime.

"In each case, we then decided to come up with five better arguments for why we needed to stay. And we succeeded both times,” Jeffrey told Defense One.

The public snub was noticed by officials in the White House and in CENTCOM, according to two sources familiar with the matter.