Pro-Iran militia leader lashes out against Pompeo visit to Baghdad

Following US Secretary of State Mike Pompeo's visit to Baghdad, pro-Iranian forces in Iraq sent a strong warning to the United States. 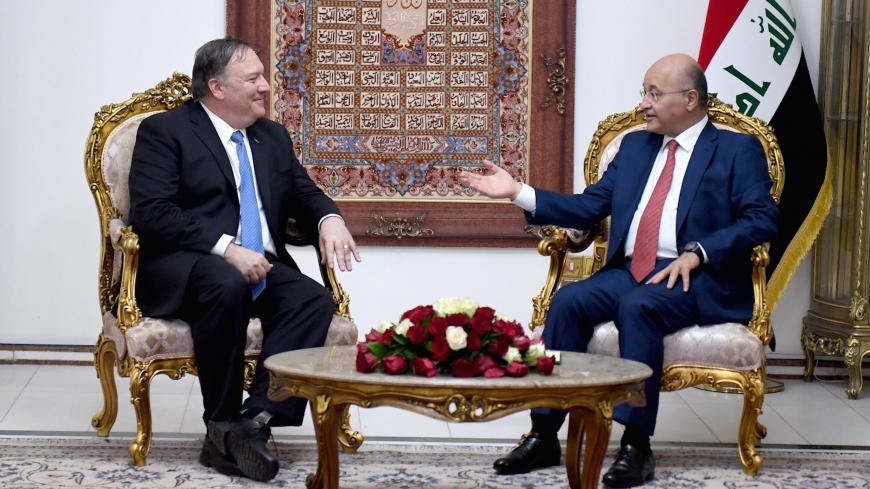 Iraqi President Barham Salih (R) meets with US Secretary of State Mike Pompeo in Baghdad, Iraq, May 7, 2019. - The Presidency of the Republic of Iraq Office/via REUTERS

A leader of the Popular Mobilization Units (PMU) reacted aggressively May 9 to this week's visit of US Secretary of State Mike Pompeo to Baghdad, which was not announced beforehand.

“Americans are in a trouble now, especially considering that US troops' bases are known in Iraq and the region and can be targeted easily,” a senior PMU commander, Moeen al-Kadhimi, said at a press conference two days after Pompeo's visit. He said, “Pompeo's statements indicate the great fear Americans are witnessing today.” Kadhimi said the targeting of US troops inside and outside of Iraq is always an option if the United States encroaches on Iraqi sovereignty.

On May 8, Nouri al-Maliki, a former prime minister and the head of the State of Law Coalition, said, “Iraq should distance itself from any regional or international conflict and its sovereignty must be respected.” In his meeting with Assistant Secretary of State for Near Eastern Affairs David M. Satterfield, Maliki added, “Iraq should not be a departure point for any attack against others.”

Maliki, who is closed to Iran, was clearly referring to the recent US activities in Iraq against Iran. US President Donald Trump said early this year that US troops in Iraq are to monitor and maintain pressure on neighboring Iran. The US Embassy in Iraq criticized Iran's Supreme Leader Ali Khamenei on its Facebook account. And last but not least, Pompeo's visit to Baghdad was a clear signal to Iran.

“The message that we’ve sent to the Iranians, I hope, puts us in a position where we can deter and the Iranians will think twice about attacking American interests,” Pompeo said in his visit to Iraq, adding that US intelligence was “very specific” about “attacks that were imminent.”

Pompeo's visit to Iraq was also in conjunction with sending the aircraft carrier USS Abraham Lincoln and a bomber task force to the region because of a “credible threat by Iranian regime forces,” as US national security adviser John Bolton said two days before Pompeo's visit.

A source close to Iraq's prime minister told Al-Monitor that the Iraqi government is afraid that Iran will use proxies under the cover of the Islamic State to attack US troops in Iraq.

A member of parliament from the State of Law, Ali al-Ghanimi, said May 8, “Pompeo's statements are nonsense excuses in order to smooth the way for the use of Iraqi territory against Iran.”

Pompeo, in his remarks to the traveling press, quoted Iraq's president and prime minister regarding the protection of Americans in their country, saying, “They both provided assurances that they understood that was their responsibility.” However, no such assurance was mentioned in either leader's statements about the meeting with Pompeo. They only spoke generally about the strategic partnership with the United States and the importance of Iraq's role in the region.

Even if such assurances were provided by the Iraqi president and prime minister, the question is how could they stop the pro-Iranian PMU factions that often act independently from the Iraqi government.

The abovementioned Kadhimi statement is only one example of a PMU stance at odds with the Iraqi government.

A former deputy prime minister, Baha al-Araji, said Pompeo's visit was a warning to the Iraqi government to take a clear position on the US-Iranian conflict and to not try to act impartially.

The United States has more than 5,000 troops in Iraq. A great number of them are located at the Ain al-Asad air base in Anbar province in western Iraq, dozens of kilometers from a PMU base in Anbar. Reuters reported in August that Iran had moved missiles to Iraq as a warning to enemies. If there is any further escalation between the United States and Iran, the potential targeting of US troops by pro-Iranian militias is a serious threat.

A source close to Iraqi Prime Minister Adel Abdul Mahdi told Al-Monitor on condition of anonymity that the Iraqi government is afraid that Iran will use proxies under the cover of the Islamic State to attack US troops in Iraq. In this way, Iran would not be held accountable for the attack; however, in such a situation, Iraq still would pay the price.

The source added that Abdul Mahdi held a special meeting after the Pompeo visit with the presence of the head of the intelligence service, the foreign minister and other officials to discuss Pompeo's visit to Baghdad. The meeting lasted all night.

During the meeting, Abdul Mahdi said Pompeo had warned him that the United States would target some pro-Iranian militias within the PMU if any attack takes place against US troops in Iraq.

Abdul Mahdi has received assurances from the PMU that it will not target US troops in Iraq, but this will not stop other groups affiliated with Iran from targeting US interests in the country.