Iran already turning Iraq into battleground against US

The array of recent attacks against US interests in Iraq indicate Iran's proxies are hard at work. 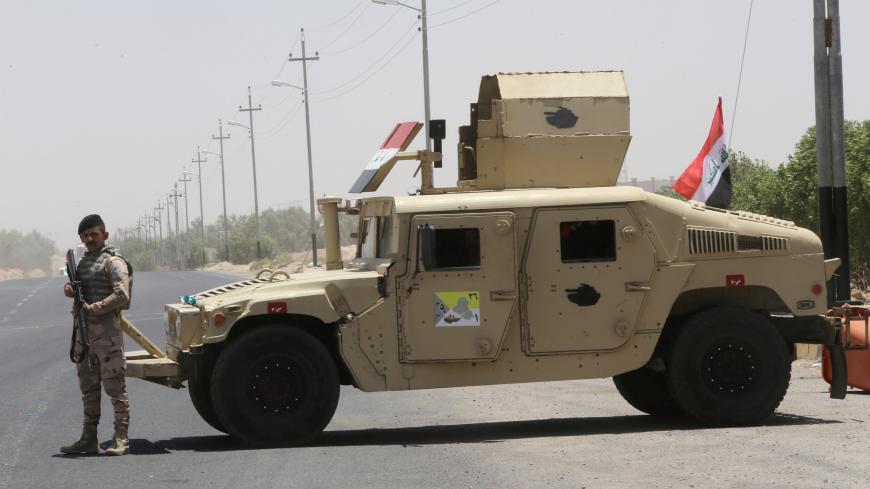 An Iraqi soldier stands next to a military vehicle at the entry of Zubair oil field after a rocket struck the site of residential and operations headquarters of several oil companies in the Burjesia area, in Basra, Iraq, June 19, 2019. - REUTERS/Essam Al-Sudani

As tension intensifies between Washington and Tehran, attacks against US interests in Iraq are increasing quickly and significantly.

A short-range Katyusha missile on June 19 hit the Burjesia site that houses the operations and residential headquarters of several global oil companies, including US energy giant ExxonMobil, Royal Dutch Shell of the Netherlands and Italy's Eni. The complex is west of Basra in southern Iraq, near the Zubair oil field and the Iranian border.

The rocket struck about 100 yards from the ExxonMobil headquarters. At least two Iraqi nationals working at the site were injured, but no deaths were reported.

Immediately after the attack, ExxonMobil evacuated 21 staff members by plane to Dubai. This is the second time ExxonMobil has removed some of its workers from Iraq. The first time occurred after the US Embassy in Baghdad announced May 15 it was evacuating non-emergency diplomatic staff due to threats by Iran-backed militias.

These militias are very sensitive about US economic activities in Iraq. In September 2018, the US Consulate in Basra was shut down after it received threats that it would be attacked with missiles. The consulate had announced the day before shutting down that it was planning to partner with UNICEF to help increase access to clean water for the province's residents amid protests against the government over the lack of services.

Another Katyusha attack occurred June 18 on the presidential palaces east of the northern city of Mosul. The site was turned into a military base in 2003 and currently hosts US military advisers. No causalities were immediately reported.

Last month, there was another attack in which a Katyusha rocket landed in the middle of the Baghdad's Green Zone, where there are many government offices and foreign embassies, without causing any losses.

Even Iraq's Popular Mobilization Units (PMU), which some of its factions have ties to Iran, have condemned some of the incidents, but the United States has blamed Iran-backed militias in Iraq.

US Vice Adm. Michael Gilday said last month that the United States is confident that Iranian proxies in Iraq fired rockets into the Green Zone. US Secretary of State Mike Pompeo, during his surprise visit May 7 to Baghdad, delivered a warning to Iranians.

“The message that we’ve sent to the Iranians, I hope, puts us in a position where we can deter and the Iranians will think twice about attacking American interests,” Pompeo said, adding that US intelligence was “very specific” about “attacks that were imminent.”

Iraqi Prime Minister Adel Abdul Mahdi issued a statement June 19 affirming that “any state from the region or outside of it is not allowed to use Iraqi territory against other countries.” The statement can refer to Iran as a regional power and the United States as an international power; both have great influence on Iraqi politics.

Abdul Mahdi also emphasized that no Iraqi military force is allowed to act without his permission as commander in chief of the Iraqi Armed Forces. However, he admitted that fully implementing these rules will take time, implying that some Iraqi military factions might act without permission, under the influence of other countries.

Some of the statements and actions of the PMU are clear evidence that it acts independently of the Iraqi government. For example, Nasr al-Shemmary, assistant secretary general of Harakat Hezbollah al-Nujaba, a PMU organization, announced May 13 that the PMU was ready to target US interests as appropriate. "Confrontation with the United States will stop only when it is eliminated from the region, along with the Zionist entity," he added, referring to Israel.

The United States released new images this week that the Pentagon says provide more evidence of Iran's involvement in the recent attacks on tankers in the Gulf of Oman. Soon after, US Acting Defense Secretary Patrick Shanahan said an additional 1,000 troops will be sent to the Middle East in response to Iran's "hostile behavior." The United States already has more than 5,000 military personnel there.

The series of attacks against US interests in Iraq, together with direct threats by some PMU militias and the Iraqi prime minister's concerns about those factions indicate that the conflict between the United States and Iran has already moved into Iraq. This all raises concerns of future escalation between the two parties and its impact on Iraqi territory.