Trump flashes art of the deal to Iran 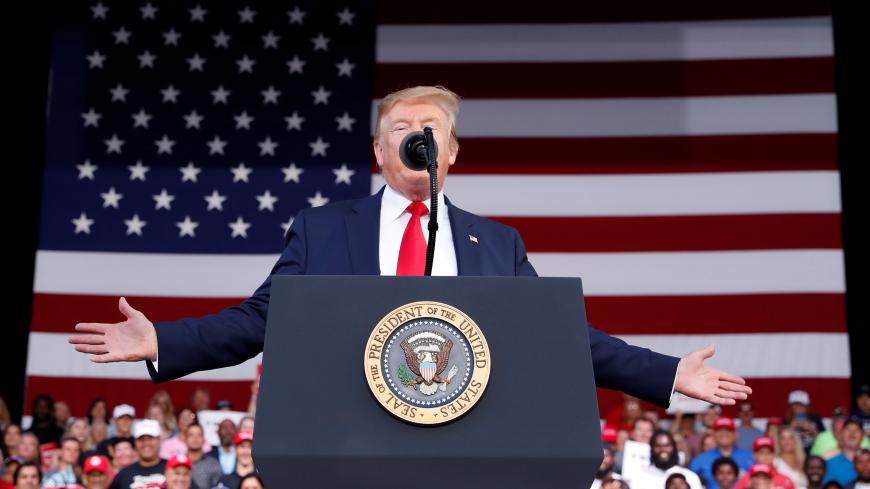 US President Donald Trump speaks during a campaign rally in Panama City, Florida, May 8, 2019. - REUTERS/Kevin Lamarque

US President Donald Trump said he is open to dialogue with Iran about a new nuclear agreement, signaling that the art of the deal is in play.

If Iranian President Hassan Rouhani seeks a diplomatic track, this is it. Trump’s offer of a direct diplomatic channel is likely genuine and certainly par for the course in how his administration deals with adversaries, such as North Korea.

Trump's suggestion that “they [Iran] should call, and if they do, we’re open to talk to them,” may have knocked back even some of his own advisers. His remarks Thursday capped off a week in which he sent a battleship and bomber group to the Gulf in response to what the White House termed “troubling and escalatory indications and warnings” from Iran; US Secretary of State Mike Pompeo canceled a meeting with German Chancellor Angela Merkel to fly to Baghdad to meet with Iraqi officials to say that the United States would protect its people if threatened by Iran in Iraq or anywhere else (see below); and the administration announced sanctions on Iranian steel, aluminum and copper exports.

Trump’s seemingly off-the-cuff comments come amid reports of his dissatisfaction with national security adviser John Bolton over US policy toward Venezuela, and disagreements with Bolton and others in his administration over North Korea.

Asked Thursday if he was satisfied with Bolton, Trump replied, “John is very good” and “I actually temper John, which is pretty amazing, isn’t it?... I get very good advice from John.”

Trump’s offer could be a diplomatic lifeline to Iran, which announced that it would step back from commitments to adhere to limits in the Joint Comprehensive Plan of Action dealing with low enriched uranium and heavy water, as we report here. Iran’s economy is in dire straits as a result of US sanctions, with oil exports well below 1 million barrels per day, and no sign that a European workaround will save the day, as Tehran had originally hoped.

Trump put more than just a phone call on the table. He said, “We hope we don’t have to do anything” with regard to the use of military force, adding, “We can make a deal, a fair deal. … We just don’t want them to have nuclear weapons. Not too much to ask. And we would help put them back into great shape. They’re in bad shape right now. I look forward to the day where we can actually help Iran. We’re not looking to hurt Iran. I want them to be strong and great and have a great economy. … We have no secrets. And they can be very, very strong, financially. They have great potential.”

Iran’s ambassador to the United Nations, Majid Takht Ravanchi, rejected Trump’s offer to talk, asking, “What is the guarantee that he will not renege again on the future talks between Iran and the United States?"

There is of course no guarantee, and Iranian officials may be understandably flummoxed by the mixed messages from Washington. But this is how it works under Trump. The offer of dialogue is simply that, and not a signal that the maximum pressure policy is being revisited. But it is a potential offramp, even if a risky one, for both Washington and Tehran. Trump has now put the burden on Tehran to open a diplomatic channel. The hedge, from our perspective, should be on talks. Absent diplomacy, momentum is otherwise on the side of escalation.

Intelligence from Mossad that Hezbollah had set up camp on Kish Island may have contributed to the Trump administration’s heightened concerns about Iranian threats to US personnel and assets in the region, Ben Caspit reports.

“The possibility of Iran blocking the straits or obstructing the movement of oil tankers in the region was already a concern, and the presence of Hezbollah on Kish Island has only intensified it,” adds Caspit. CNN reported that Iran was likely moving short-range missiles onto boats in the Gulf. The US Maritime Agency issued an advisory the next day warning of “heightened Iranian readiness to conduct offensive operations against US forces and interests.”

The intelligence warnings from Iraq, however, conveyed even greater urgency. Pompeo’s one stop in the region was Baghdad, where he discussed with Iraqi officials “very specific threats we had about Iranian activity that was taking place that put at substantial risk our facilities, our men and women who are serving in Iraq. And I wanted to make very clear to them that they needed to be kept secure, and the Iraqi leadership was great, and have done that.”

“A source close to Iraqi Prime Minister Adel Abdul Mahdi told Al-Monitor on condition of anonymity that the Iraqi government is afraid that Iran will use proxies under the cover of the Islamic State to attack US troops in Iraq,” writes Ali Mamouri. “In this way, Iran would not be held accountable for the attack; however, in such a situation, Iraq still would pay the price.”

“The source added that Abdul Mahdi held a special meeting after the Pompeo visit with the presence of the head of the intelligence service, the foreign minister and other officials to discuss Pompeo's visit to Baghdad,” continues Mamouri. “The meeting lasted all night. … Abdul Mahdi said Pompeo had warned him that the United States would target some pro-Iranian militias within the PMU if any attack takes place against US troops in Iraq. Abdul Mahdi has received assurances from the PMU that it will not target US troops in Iraq, but this will not stop other groups affiliated with Iran from targeting US interests in the country.”

Laura Rozen further suggests that the heightened Iranian activity in Iraq may in part be in reaction to US support for Iranian opposition groups.

“The United States may also be perceived by Iran to be taking a series of actions, such as covert support to anti-Iran groups in Iraq, that some Iranian group or Iranian-inspired group may see as provocative and generated chatter of a potential response,” she writes.

Last week we reported on the Washington lobbying activities of the Komala Party of Iranian Kurdistan, an armed group with communist origins exiled in the Kurdistan Region of Iraq.