Could Iraq play a role in easing US-Iran tensions?

Iraqi political leaders, alarmed by the escalating proxy war between Iran and the United States taking place in their country, are trying to serve as mediators between the two. 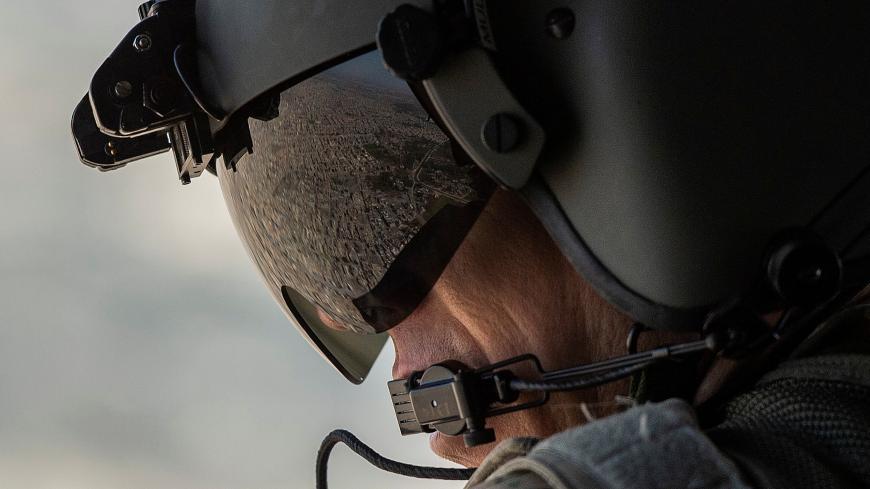 A view of Baghdad is reflected in the visor of a US Army helicopter crew member as he looks out of a Chinook helicopter flying from the US Embassy to Baghdad International Airport, following the helicopter of US Secretary of State Mike Pompeo, Jan. 9, 2019. - Andrew Caballero-Reynolds/Pool via REUTERS

US Secretary of State Mike Pompeo decided May 8 to cancel his meeting with German Chancellor Angela Merkel and instead head to Iraq. The top US diplomat made it clear that he was visiting Baghdad to discuss increasing tensions with Iran.

An Iraqi official told Al-Monitor on condition of anonymity that Pompeo, in fact, delivered Iraqi Prime Minister Adel Abdul Mahdi a flash drive with recordings of pro-Iranian Iraqi groups preparing to attack US interests in the country. And, following Pompeo’s meeting, some Iraqi sources have indicated that the United States may consider Iraq as a bridge to an eventual dialogue with Iran — a role the Iraqis may be willing to play.

According to the Iraqi official, the Iraqi prime minister wants to play a serious role in de-escalating tensions with full backing from the highest Shiite religious authority in Iraq, Grand Ayatollah Ali al-Sistani, who believes Iraq is capable of emerging as a fair mediator, not only between Iran and the United States, but also Tehran and its regional rivals.

Pompeo stressed during his visit that Iraq should not play a role in easing the sanctions on Iran. But Pompeo failed to get positive assurances from his Iraqi hosts.

Only a week before Pompeo’s surprise visit to Iraq, security forces reportedly thwarted an attack on Camp Taji north of Baghdad and seized a number of Katyusha rockets at the scene. Saudi-owned Al-Arabiya news channel said that US forces were present at the camp during the attack.

The United States announced May 5 that it is deploying a carrier strike group and a bomber task force to the Middle East to send a clear message to Iran that any attack on US interests or its allies will be met with “unrelenting force,” according to US national security adviser John Bolton. Amid rising tensions with Iran, Bolton said the decision was “in response to a number of troubling and escalatory indications and warnings.”

“The United States is not seeking war with the Iranian regime," he said, "but we are fully prepared to respond to any attack, whether by proxy, the Islamic Revolutionary Guard Corps (IRGC) or regular Iranian forces.”

The US Embassy in Baghdad issued a security alert May 12, warning American citizens of "heightened tensions" in Iraq and advising against travel to the country. One day later, Pompeo told CNBC that, in the event that Iran decided to target US interests, “we are prepared to respond in an appropriate way.” A subsequent alert by the US State Department May 14 called on all nonessential US personnel to leave Iraq.

Iraq’s status as an area of shared influence between Iran and the United States leaves the country’s leaders with few options. They can either adopt the stance of one partner and see itself fall out with the other, or try to build bridges — and this is what the Iraqis strive to do.

Yet the infrastructure that Iran has built in Iraq over the past years has provided it with exceptional leverage. Today, over 15 years after the United States invaded Iraq and toppled Saddam Hussein's regime, the Islamic Republic is regarded as a main player in Iraq.

According to Abdul Mahdi, both Iran and the United States don’t want to fight a war, and the struggle between the two is a complicated issue.

Iran’s allies in Iraq negatively reacted to Pompeo’s visit, with Popular Moblization Units (PMU) leader Moeen al-Kadhimi saying at a press conference, "The Americans are in trouble now, especially considering that US troops' bases are known in Iraq and the region and can be targeted easily.”

On Instagram, an account linked to Maj. Gen. Qasem Soleimani, the head of the IRGC's foreign operations, posted a photograph of Soleimani with PMU commander Abu Mahdi al-Muhandis in Baghdad. The photo came amid reports that the United States had slammed Soleimani's role in Iraq.

“We refuse any use of our territories against our neighbors, and mainly Iran,” Laith al-Azari, a member of Asaib Ahl al-Haq's political bureau, told Al-Monitor. “This is going to shake the stability in the region while Iraq today is just recovering from the danger of the Islamic State. Therefore we refuse any use of our territories because this poses as a violation of our sovereignty."

Azari added that Asaib Ahl al-Haq, which is a close ally of Tehran, will confront any attempt to attack Iraq’s neighbors from Iraqi soil “with all possible means.” Iran trained Asaib Ahl al-Haq, along with other Shiite militant groups in Iraq, during the US occupation of the country. These groups played a vital role in Iran's proxy war during that period.

Now that the next wave of a proxy war is mounting, these Iraqi factions might once again rise as an Iranian tool to confront US pressure. Iraq could once again become an arena for another Iranian-US conflict — one that the Iraqi government is struggling to prevent.

In accordance with the reported Iraqi role between Iran and the United States, it seems that Qatar is also active on this channel. The Qatari-owned Al Jazeera network reported May 15 that Foreign Minister Mohammad Bin AbdulRahman Al Thani visited Tehran in recent days aiming to defuse tensions with Washington. Al Jazeera quoted a "highly placed source familiar with details of the trip" as saying that the purpose of the visit was to "open new avenues to resolve the growing crisis between Iran and the United States and ease the volatile situation."