Who is bombing Egypt's electricity towers?

The recurrent targeting of electricity towers in Egypt has increased accusations against the Muslim Brotherhood, which has wide control within the Ministry of Electricity and Energy, as some claim that they are working with terrorist groups against the current regime. 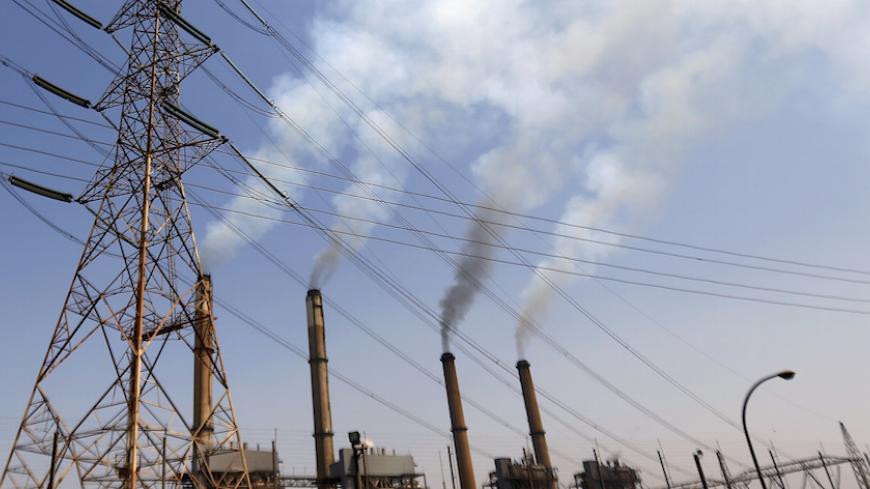 Terrorist attacks on power plants in Egypt have escalated since the ousting of Mohammed Morsi and the Muslim Brotherhood on July 3, 2013. Explosions took place April 15 targeting an electricity tower that provides electricity to the Egyptian Media Production City, home to the studios of many satellite stations. As a result, TV channels stopped broadcasting for almost 45 minutes.

The Al-Iqab Al-Thawri (Revolutionary Punishment) movement claimed responsibility for the attack on the power station and posted a video online. In the video, the movement threatened Egyptian journalists for supporting the current regime.

Meanwhile, on April 17, Sky News Arabia quoted the statements of anonymous security sources, saying that the perpetrators have been identified and are being tracked down. The sources did not mention any names but insinuated that the Ajnad Misr group (Soldiers of Egypt) might be involved in the operation.

Al-Monitor looked into the details of the explosions given the lack of public information on the part of the police and public prosecution.

According to workers at the power plant in the Media Production City who spoke to Al-Monitor, the most surprising fact is that the perpetrators were able to identify and target the electricity tower providing power to the city, despite it being located among many other pylons supplying other regions.

The sources suspect that one of the plant’s workers or supervisors guided the bombers.

Mohammed Yamani, the spokesman for the Ministry of Electricity and Energy, dismissed this. “One should not jump to conclusions and make accusations, as the prosecution investigations are still ongoing,” he told Al-Monitor.

The Muslim Brotherhood holds sway in the Ministry of Electricity and Energy. Engineer Mohamed Shaker El-Markabi, the current minister of electricity and energy, was one of the candidates on the list of the Egyptian Engineers Syndicate, which was affiliated with the Muslim Brotherhood during the 2011 elections of the Engineers Union. He also served as the union’s undersecretary after winning the elections.

On April 9, 2014, former ministry spokesman Akhtam Abu al-Ala was dismissed because of his affiliation with the Brotherhood, according to journalist Ahmed Moussa. However, Ala responded in statements back then that he did not know the reasons behind his dismissal. El-Shaab news website quoted one of his statements in August 2013, describing the toppling of Morsi as a military coup and declaring his support for the former president.

In the same vein, engineer Talaat Abu Zeid, head of the Egypt Commissions National Energy Control Center, was sacked on Sept. 18, 2014. El-Watan news website reported that he was dismissed because of his affiliation with the Muslim Brotherhood, according to security reports. The accusations that Abu Zeid belongs to the Brotherhood continued against the backdrop of the events on Sept. 4, 2014, known as “Black Thursday,” when a massive blackout hit Cairo and some other areas in Egypt — which the Egyptian Ministry of Electricity and Energy said was the result of a technical failure.

On April 26, following the Media Production City bombing, Shorouk News quoted Yamani in a telephone call on the TV show "Sabah ON" saying that about 1,000 Brotherhood-affiliated workers in the electricity sector were dismissed by the Ministry of Electricity and Energy so as to cleanse the ministry of Brotherhood members.

However, a source in the ministry told Al-Monitor on condition of anonymity that these workers were moved to other departments that are less vital and less dangerous, such as the security and technical divisions, because “dismissing them based on suspicion that they are affiliated with the Brotherhood is considered an arbitrary dismissal.”

Following the recent bombings, many journalists continue to stress that the Muslim Brotherhood has a strong grip on the Ministry of Electricity and Energy. However, Ahmed Hanafi, the head of the Egyptian Electricity Transmission Company, told Al-Monitor, “The bombing of the Media Production City's electricity tower took place not because the electricity sector is under control of the Brotherhood, but because of lax security inside the power plants.”

He added: “The identification of the tower supplying Media Production City is not very difficult, because an identification plate is placed on each tower, noting its code and the area it supplies for easy reporting of any malfunctioning detected to the electric power transmission branches."

“The Ministry of Electricity is forced to deal with the Bedouins, in some cases out of fear that they vandalize the towers. Some Bedouin might have assisted the bombers of the Media Production City towers,” Eid said.