By mocking outdated customs or mimicking politicians in Iraq, Ahmad Wahid is entering uncharted territories with his stand-up comedy. 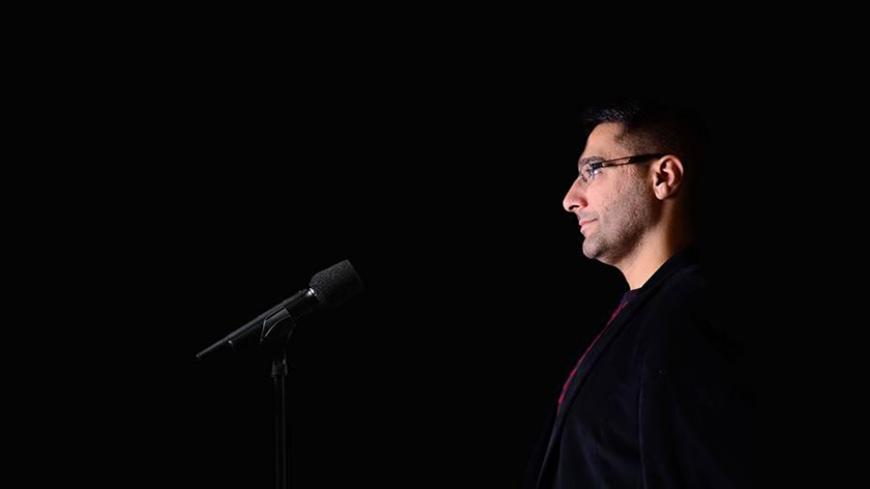 Ahmad Wahid, one of Iraq’s first stand-up comedians, struck a chord over social media when he suggested, tongue in cheek, that a friendly security officer or a sheikh was much better than karate for protection. Mocking the security situation in Iraq in a video he posted on Facebook May 14, Wahid said, “Karate lessons will not do you any good in Iraq. There are several ways of self-defense. First, befriend a decent security officer who would vouch you out if you ever get arrested. You should also keep in touch with the sheikh of your tribe, so he can protect you in case of tribal conflicts. Get yourself a decent weapon to protect yourself should someone try to attack you.”

Wahid is proud of his social media fame and his followers, but he prefers live interactions from a stage, where he can tease his audience and mock the political and social events of the country in his unique, homegrown style. “The biggest challenge in stand-up comedy is knowing how to give it Iraqi charm instead of adopting a foreign routine,” Wahid told Al-Monitor.

Wahid had previously given about 10 performances in various Iraqi cities, the first in the city of Basra, where he was born and raised. He also worked with NRT TV to produce and broadcast two episodes of a show called "Esh,” which means “do not talk” in the local Iraqi dialect.

Speaking to Al-Monitor about the show, Wahid said, “I am proud of this experience and I want to do it again [return to stand-up comedy]." He added that part of the reason he stopped was the need to find a balance between production standards and the right audience. “We found an audience in Basra, but the station did not think that the production standards were appropriate for broadcast. When the channel moved the show to another part of Iraq where better standards were available, we lost the audience. So we stopped producing other episodes and waited to find a location that contained both factors.”

Wahid’s stand-up shows are usually sold out. His audiences laugh out loud as he mocks worn-out customs or does impressions of politicians. Some of his shows have been filmed and broadcast on YouTube, attracting over 500,000 views.

“Stand-up comedy is very well-known abroad as well as in Gulf countries," said Wahid, who is one of few stand-up comedians and the most well-known in Iraq. “The audience was receptive to this kind of bold performance, because it presented something different. It highlights aspects of our lives that usually go unscrutinized. Here, [reality] is the punch line,” he added.

Some young people in Iraq ridicule social and political phenomena, but most of them work individually to produce videos that they post on social media. Iraqi society keeps up with them and seems quite pleased with videos that display their concerns using black comedy.

There are some satirical Iraqi shows broadcast on Iraqi and international television channels, such as Hona Baghdad's “Melon City,” which mocks social phenomena such as the increasing divorce rate and corruption in state institutions. There is also Deutsche Welle's Al-Basheer Show, which is filmed in Amman and covers political news and boldly criticizes politicians.

Wahid makes a distinction between comedy and irony. “Stand-up comedy relies more on irony than comedy. My first intention is criticism before laughter; laughter is just a means for me to get my goal," he said.

Although Wahid addresses social and religious issues, politics gets the most of his attention. “I focus on politics because it is the main reason our society, religion, lives and culture have been distorted. We must first criticize and fix politics before addressing social affairs in our art,” he noted.

“I have met many I have mimicked or mentioned in my performances and they laughed about it. I know very well how to criticize without hurting anyone or humiliating people,” he explained.

Wahid has not received any threats from politicians, although he has been heckled. “When I address a topic that has a religious aspect, viewers sometimes begin using foul language and insulting me,” he said.

Today, Wahid is having trouble finding a place to perform. He said, “Theaters are mostly run by the government, and many of them cannot afford to allow a satirical performance to address sensitive topics. Theaters ask to examine the content of the performance before allowing me to go on stage, and I will never accept that.”

Wahid is not interested in giving workshops for youths to learn how to perform stand-up comedy. “Either you love this art or you don't. … If not, no workshop will ever be enough to teach you how to become a satirical artist,” he concluded.