Gaza’s women are rebelling against religious and cultural customs and joining men in comedy shows that are broadcast on social networking sites. 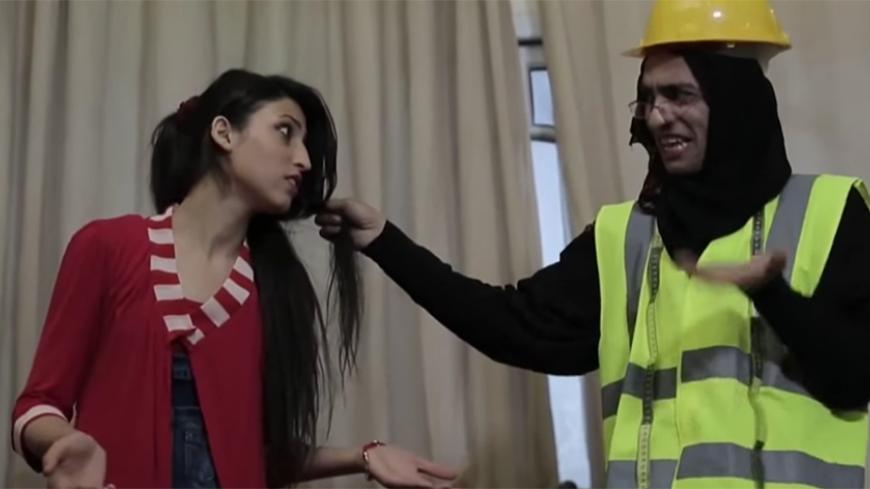 Actress Reham Kahlout appears in the TV show "Koumiloggio" in this video still uploaded on May 16, 2015. - YouTube/Media Town

GAZA CITY, Gaza Strip — Reham Kahlout, 19, is making her way in the world of comedy in the Gaza Strip, a society that has not generally been accepting of women taking part in acting roles that break with customs and traditions.

“Society refuses my roles. It sharply criticizes my acting with young men and finds it a disgrace. It considers acting to be a waste of time and makes fun of comedians without showing any respect to them,” Kahlout told Al-Monitor.

Despite this negative social outlook on Kahlout’s career choice, her family helped her and encouraged her to keep going. Yet they did not allow her to complete her university education in the field of cinema and acting, as they forced her to study law at the University of Palestine in Gaza and keep acting as a secondary option for the future.

Kahlout found her hobby when she was a child, and she started acting when she was 16 years old. She took part in small roles at school and then participated in 2015 in the stand-up comedy show “Bas Ya Zalameh” (“Stop it, Man!”). In the show, young men from Gaza appear in short stand-up comedy clips that sarcastically deal with the Palestinian reality and customs and traditions. The clips are posted on the show’s YouTube channel, which has about 97,000 subscribers and about 17 million views. The show started in 2012 and is still ongoing.

Remarkably, the male actors in this show are forced to wear a veil, put on makeup and soften their voices to appear as women, given the lack of actresses who have the courage to break into the world of comedy and defy society.

“Through my participation in comedy roles, I am trying to encourage talented girls to act and break with the societal barriers,” Kahlout said. She added, “Freedom of choice and initiative cannot be monopolized by men. Women must also be given this chance away from any restrictions.”

Kahlout represents a very small number of girls who have the courage to defy society’s negative outlook on actresses who take part in shows with young men. These include Serine al-Barkooni, 21, who graduated from the Press and Information Section of the College of Intermediate Studies at Al-Azhar University in Gaza. She took part in several episodes of "Bas Ya Zalameh" and will soon join the stand-up comedy show called “Summer Cloud,” which sarcastically deals with the economic issues plaguing Palestinian society such as poverty and unemployment. This show is broadcast on social media websites.

Barkooni told Al-Monitor, “Customs and traditions require girls to stay home until a suitable groom comes to marry them, and that is what I'm trying to rebel through my participation in comedy shows.”

Barkooni said that she broke with society’s limits thanks to the help and support of her family, who greatly contributed to strengthening her fight against society’s negative perception.

“Had I taken part in serious shows where drama is involved, I could have received less severe criticism, but society considers that a girl’s participation in comedy shows makes her lose her femininity,” she added.

Dardah al-Shaer, a professor of sociology at Al-Aqsa University in Gaza, said society’s negative outlook on female acting in comedy shows is attributed to two main factors, namely that Islamic Palestinian society sanctifies women through several aspects and does not allow them to work outside the house or offer services to other people.

Shaer told Al-Monitor, “This is why women's participation in comedy shows that make people laugh is out of the ordinary and violates the sanctity attributed to women. This prompts society to criticize such behavior.”

As for the second factor behind society’s negative perception of comedian actresses, Shaer said, “Palestinian culture is relatively rough due to the occupation and the political, economic and tragic conditions experienced by society. This makes soft feminist behavior out of the ordinary.”

Film critic Nawras Abu Saleh said that the girls’ participation in the local comedy business is an added value for the fledgling Palestinian comedy. He indicated that most of the locally produced comedy shows are created by individuals who have a hidden talent in comedy and who decided to resort to acting to show their talent and develop the acting industry in the Palestinian territories.

He believes that Palestinian comedy is mostly black satire as it deals with negative political or social aspects and puts them in a cynical framework that reflects rebellion against reality.

Abu Saleh said that social networking sites such as YouTube and Facebook are serving as platforms for this comedy in the absence of any interest on the part of local Palestinian television channels to broadcast these works for many reasons, most notably society's perception that criticizes the participation of girls in these roles. Also, these channels are always busy covering serious events imposed by the political reality in Palestinian society under the occupation.

Abu Saleh said that changing this outlook requires raising awareness and bringing about change in the old culture, and this is partly a responsibility that the Palestinian educational and cultural system, such as schools, universities, TV channels and radio stations, has to assume.

For this to be done, Kahlout said she will not let societal barriers stop her from achieving her dream of becoming a famous actress.