Funding reasons have halted the Egyptian project to launch an international and regional news channel to promote Egypt's role in the Arab world. 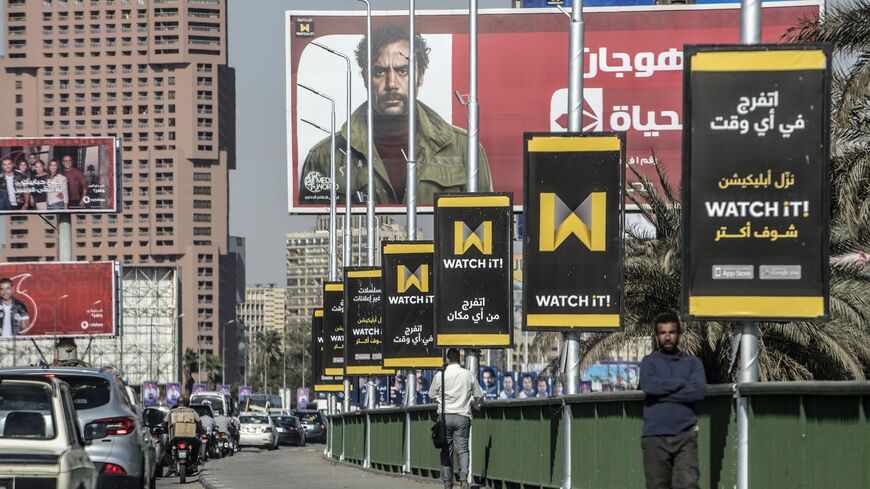 A picture taken on May 7, 2019, shows billboards advertising "Watch iT," Egypt's first video-streaming app, in Cairo. The video-streaming app was launched this month just in time for the Muslim holy month of Ramadan, the high season for the television industry, but its debut has been dragged by critics over high prices and technical failures. - KHALED DESOUKI/AFP via Getty Images)

The Egyptian state’s plan to launch a regional news channel in the first quarter of 2022 could come to a permanent stop.

In a post on its Facebook page on May 31, Mada Masr newspaper quoted a source at United Media Services, a production company that is said to be owned by the Egyptian General Intelligence, as saying that the work to launch a global regional news channel has been halted because of funding problems.

The source said the sovereign authorities supervising the management of United Media Services’ channels gave official orders to stop the project before the completion of the channel’s headquarters in Media Production City near Cairo.

The source said United Media Services already spent large sums of money on the production of a drama series shown in 2022 during Ramadan and can no longer afford to produce TV shows.

Hossam Saleh, assistant chairman of the board of directors at United Media Services, announced back in May 2021 that the company’s studios were equipped — and Egypt deserves, with its soft power — to have a global channel.

“The plan was to launch the Egyptian regional news channel in the first quarter of 2022, targeting Egyptian, Arab and Arabic speaking audiences, as part of Nilesat coverage, as well as Arabic speakers in Europe, America, Canada and Australia,” Saleh said then.

Egypt’s General Intelligence owns a number of major TV channels, including Al-Hayat and OnTV. Reuters reported back in 2019 that United Media Services’ board includes people who previously worked in the intelligence service.

Egyptian President Abdel Fattah al-Sisi confirmed in November 2017 that “the preparations are underway to launch an Egyptian news TV channel according to international standards soon.”

He added that “the top-notch regional and international news channel requires a high cost.”

The Egyptian parliament confirmed at the time that Sisi’s announcement aimed to confront Qatar’s Al Jazeera channel, which has aired programs and news critical of the Egyptian government. In a press statement back then, Nader Mustafa, secretary of the parliament’s Information Committee, said, “Sisi’s announcement regarding the preparations for the launch of a world-class Egyptian news TV channel soon has made millions of Egyptians happy, as Arab countries have suffered a lot from Qatars’ Al Jazeera channel, which caused the spread sedition, conspiracies, wars and destabilizing disinformation.”

But because of a lack of sufficient funding, the Egyptian media plan was not achieved. This prompted the ruling regime to seek help from Saudi Arabia. The United Media Services signed memoranda of understanding and cooperation with Saudi Arabia’s MBC channels on May 30, 2021.

The signing was preceded by a meeting on May 24, 2021, between Sisi and Turki al-Sheikh, adviser to the Royal Court in Saudi Arabia and chairman of the General Entertainment Authority's board of directors. The Egyptian presidency said at the time that the two sides agreed to cooperate in the investment and entertainment sectors in the coming period.

Egyptian media professional and TV talk show host Amr Adib said on the Saudi MBC channel on May 28, 2021, that “Saudi Minister Turki al-Sheikh was very excited to meet President Abdel Fattah al-Sisi a few days ago, and there will be official joint cooperation between the Egyptian and Saudi media bodies.”

But the deal signed with Saudi Arabia did not lead to the launch of the news channel.

The Mada Masr report stated that the negotiations to finance the channel with Sheikh had faltered.

“Several rounds were held between intelligence top officials and the Saudi adviser at the Egyptian intelligence service’s headquarters in an effort to persuade the latter to finance a news channel that would express the Egyptian and Saudi policies, broadcast from Cairo, with Egyptian staff and Saudi funds to counter the Qatari media tide,” the report said back then.

Hisham Qassem, former head of the Egyptian Organization for Human Rights, told Al-Monitor that the sovereign bodies’ control over the media is an obstacle to the launching of the Egyptian regional news channel because the ultimate success of media requires freedom and diverse views.

He added, “Al Jazeera achieved success in its early years because it was run by a group of distinguished media professionals and enjoyed a degree of professionalism, but its media performance deteriorated recently and turned into a Qatari platform to level criticism [against opponents].”

He noted that “any Egyptian media project [aiming] to confront Al Jazeera must be managed by media makers in an independent and professional way. The goal should be to launch a respectable outlet, not just an outlet to confront an unprofessional media such as Al Jazeera.”