The mutual escalation between Egypt and Germany regarding the human rights situation in Egypt and the threat to freeze the military deal agreed upon by German Chancellor Angela Merkel before her departure to Egypt raised several questions about the future of the relationship between the two countries as a new government takes over the country. 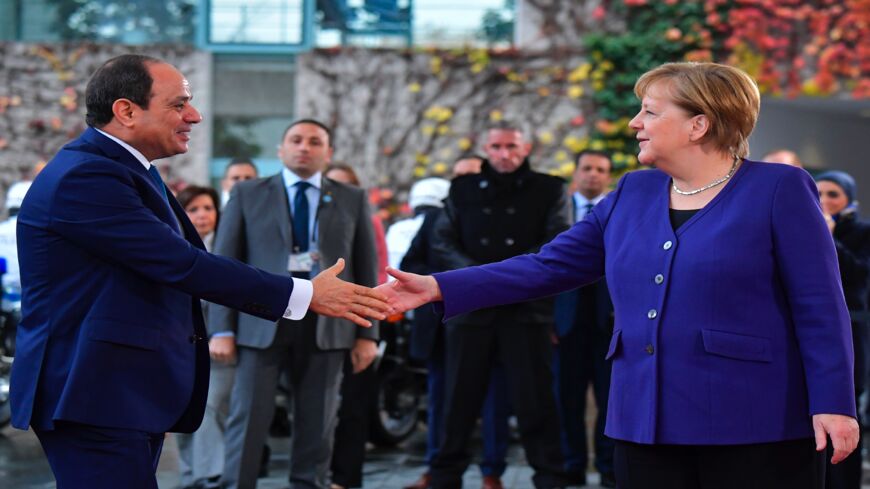 German Chancellor Angela Merkel (R) greets Egypt's President Abdel Fattah al-Sisi (L) upon his arrival for a meeting at the Chancellery in Berlin on Nov. 20, 2019. - TOBIAS SCHWARZ/AFP via Getty Images

CAIRO — In statements to the German News Agency Deutsche Presse-Agentur (DPA), German Minister of State at the Federal Foreign Office Katja Keul commented Dec. 16 on former German Chancellor Angela Merkel’s approval of an arms export deal with Egypt one day before her departure.

“It is unimaginable for me that the new government was going to approve of this sale,” Keul said.

She said that the agreement of the new ruling coalition includes a clear paragraph on the issue of arms exports, and “what happened shows that we have to immediately implement this paragraph while paving the way for an arms export law.”

On Dec. 18, the German Foreign Ministry sharply criticized the human rights situation in Egypt. It issued a statement whereby the verdict to be pronounced on Dec. 20 against activist Alaa Abdel-Fattah, his lawyer Mohamed el-Baqer and blogger Mohamed Ibrahim, serves for the federal government as an indicator of the direction in which the human rights situation in Egypt is evolving. It called on Egypt to have all of them released and said that lawyers should not be punished for practicing their professional activities.

This led the Egyptian Foreign Ministry to issue another statement on Dec. 18, saying it “considers this method to be a blatant and unjustified interference in its internal affairs, one that [circumvents] the judicial track without any objective evidence or support.” It called on the German government to “pay attention to its internal challenges instead of imposing its guardianship on others.”

In a final, non-appealable verdict on Dec. 20, the Emergency State Security Misdemeanor Court sentenced Abdel-Fattah to five years in prison and Ibrahim and Baqer to four on charges of spreading false news, misusing means of social media and participating in a terrorist group (i.e., the Muslim Brotherhood) with the aim of disrupting the provisions of the Egyptian Constitution and the law.

Egypt was not satisfied only with the move of issuing an official statement condemning and attacking Germany, so the state went further by using its media professionals close to the authority to condemn the National Council for Human Rights. Pro-regime journalist Ahmed Moussa said in his program “Aala Masouliyati" ("On My Responsibility"), broadcast on Sada El Balad TV on Dec. 18, “Who gave Germany the right to interfere in Egyptian affairs and the work of the judiciary. What does Germany have to do with people accused in a case of terrorism? The German Foreign Ministry is trying to give us lessons, and we are a country that does not take lessons from anyone.”

On the same day, Egyptian broadcaster Nashat Al-Daihi said during his program “Bil Waraka wal Kalam” ("By the Paper and the Pen"), broadcast on TeN TV, “We are facing a new episode of foolishness in dealing with issues that have nothing to do with Germany, and this is a blatant interference and brazen aggression. This is an unacceptable interference and an encroachment upon the Egyptian sovereignty.”

Media figure Amr Adib said Dec. 18 during his program “Al-Hekaya" ("The Story"), broadcast on MBC Egypt channel, that “the German Ministry of Foreign Affairs’ style is naive to say the least" and wondered why Germany demanded the release of these specific three names and not others."

Meanwhile, the government’s National Council for Human Rights launched a sharp attack on Germany on Dec. 18, saying that the German Foreign Ministry’s comments on cases brought before the judiciary are tantamount to blatant and unacceptable interference in Egyptian judicial affairs.

This mutual escalation sparked a wide wave of reactions amid several questions about the future of the relationship between the two countries at a time when a new government is taking over the affairs of Germany. It also raised questions about whether Germany would pass the arms deal that Merkel agreed to before her departure.

Hassan Nafaa, a professor of political science at Cairo University, told Al-Monitor that the recent German moves against Egypt only aim at conveying a message to the German public whereby the new government cares about and will not neglect human rights conditions, as opposed to the policies of the previous German government.

Regarding the passing of the arms deal that Merkel agreed to immediately before her departure, Nafaa said he expects the deal to be frozen for now, as he does not believe that the new government will accept its passage now but could pass it at a later stage.

“Germany will not withhold that military deal with Egypt. It will settle for freezing it for now,” he said.

Nafaa said that this arms deal is very important for Egypt, as it relates to air defense systems through which Egypt can protect its skies and confront Turkish drones, which Turkey has managed to market in several countries.

On Oct. 19, the Nordic Monitor website reported that Turkish President Recep Tayyip Erdogan flew to West Africa, where he visited Angola, Nigeria, and Togo with the aim of marketing military drones.

On Oct. 17, an official Turkish source told Reuters that Morocco and Ethiopia had submitted official requests to Turkey to purchase Turkish Bayraktar drones.

Nafaa said that the "relations between Germany and Egypt are strategic, as Egypt constitutes a large market for German weapons because it is one of the largest importers of German weapons in the world, so it would be difficult to stop this deal.”

Nafaa said that such German moves would not push the Egyptian government to change its policy and approach in dealing with the human rights issue, as evidenced by the issuance of a final ruling against Abdel-Fattah, among others, despite the pressure placed by the US administration to improve human rights conditions.

On Sept. 15, a spokesperson for the US State Department said that the administration of President Joe Biden would suspend the delivery of $130 million in military aid to Egypt until Cairo takes specific steps related to human rights.

Mustafa Bakri, a member of the House of Representatives, told Al-Monitor that Germany’s latest statement is marred by unacceptable arrogance and dictates, adding that the relationship between the two countries is based on common interests and not subordination. He stressed that if the new government pursues this approach, Egypt will search for arms alternatives without responding to any pressure.

Bakri said that the state is deploying unremitting efforts to improve its human rights conditions, noting that it is impossible to condone terrorist crimes that target the security and safety of the homeland.