German Chancellor Angela Merkel has come under fire for Germany’s open-door migration policy, so striking a deal with Tunisia to bring back at least some irregular migrants was a necessary step for her to defuse some of the criticism. 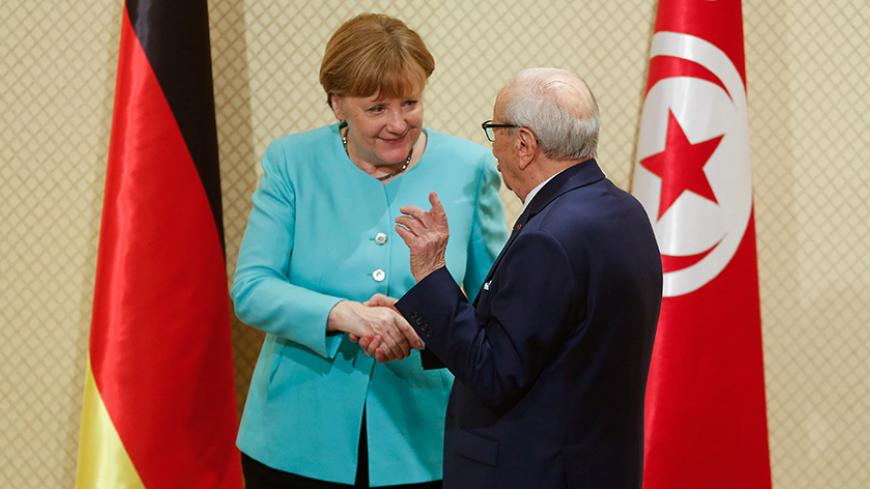 In mid-February, Tunisian Prime Minister Youssef Chahed arrived in Berlin to discuss the issues the two countries have over security and migration. A few weeks prior, Anis Amri, a Tunisian national who was living illegally in Germany under six aliases after his asylum application was denied, drove a truck through a crowded Christmas market in Berlin’s Charlottenburg neighborhood. A dozen people were killed.

Germany and Tunisia have long had a mutually positive relationship, bolstered by the European Union granting Tunisia privileged partnership status in 2012. Since Tunisia’s 2011 revolution, Germany has been a vocal supporter of the country’s democratic transition; several German nongovernmental organizations have set up offices in Tunisia. With its proximity to Libya, Tunisia is also geostrategically important to Germany. But “the security concern only emerged recently. Prior to that, migration was not a controversial issue in the Tunisian-German relations as it is now,” said Nizar Amri, a research fellow at the Tunisian-German research group Tunisia in Transition.

After the attack, Germany pointed fingers at Tunisia, where bureaucratic delays failed to deport Amri, as he no longer had his documents (he destroyed them upon first arriving in Europe via Sicily). Chahed’s visit was an opportunity for the two countries to seriously discuss migration, but it was marred with tension. "The biggest problem for Europe is refugees who go from Libya to Italy," Chahed told German newspaper Bild during the visit. Chahed also outright refused a German proposal that Tunisia build a refugee camp to process migrants.

German Chancellor Angela Merkel asked Chahed to take back more Tunisians who have been denied asylum. “We have to tell someone who doesn’t commit to voluntarily departure that he must also do it involuntarily,” she said during a press conference on Feb. 14.

On March 3, Merkel arrived in Tunisia for her first official diplomatic visit to the country. The trip was short — less than a day — but effective. In a seeming tit for tat, Tunisia agreed to take back 1,500 Tunisian irregular migrants whose asylum applications have been rejected by Germany. In exchange, Tunisia will receive 250 million euros ($265 million) in aid for development projects.

The deal is a win for both countries, though less so for the migrants involved. There are 30,000 Tunisians living in Germany, of which 1,500 are living illegally. “What are 1,500 Tunisian illegal migrants in comparison to millions of migrants and refugees from all nationalities hosted by Germany?” political analyst Youssef Cherif asked Al-Monitor. He fears these migrants will be used as “scapegoats.” Others suggest that once back in Tunisia, the migrants will make the journey again.

“The reason why Tunisia — and other countries in the region — were reluctant to take back migrants is because most of them will become a burden for a fragile economic and security situation at home,” explained Cherif. “Some are not even from those specific countries,” he continued, noting that Tunisia does not have the technology necessary to handle false identification, like in the case of Amri. Some of the logistical issues were addressed during the chancellor’s visit. "We will also help Tunisia to set up a registration system. Replacement passports are then meant to be issued within one week," Merkel announced during a morning press conference with her counterpart, Tunisian President Beji Caid Essebsi. Germany has set aside 15 million euros ($15.9 million) in aid to deal exclusively with those deported.

Since Germany’s open-door migration policy was implemented two years ago, Merkel has come under fire for “losing control” of the refugee crisis. In 2016, 900,000 refugees arrived in the country. With German elections coming up in September, striking a deal with Tunisia to bring back at least some irregular migrants was a necessary step for Merkel to defuse some of the criticism she is receiving in her own party and by far-right political groups.

Indeed, cooperation from other North African countries, which serve as a major point of transit for irregular migrants and refugees, is necessary for Merkel to achieve stability back home. A visit with Algerian President Abdelaziz Bouteflika was canceled last week, but the day before she arrived in Tunis, Merkel held similar talks in Cairo with President Abdel Fattah al-Sisi. Last year, Merkel struck a controversial migrant-exchange deal with Turkish President Recep Tayyip Erdogan. Accused of “striking dirty deals” to solve the refugee crisis, Merkel has faced similar criticism for dealing with strongman Sisi.

Tunisia is more politically stable and open than either Turkey or Egypt at the moment, but the country has come under fire for corruption, and security forces have been accused of torture and human rights abuses by Amnesty International. Most young men leaving Tunisia for Europe are searching for better opportunities; unemployment, particularly among the youth, is still high across the country. The 250 million euro aid package is meant to address some of the root causes of migration, though the exact details of how the money will be used have not been brought to light.

“We in Tunisia are today determined to find structural solutions capable of promoting economic growth [and] supporting social process,” Mohamed Ennaceur, the speaker of the People’s Representatives Assembly, said during a parliament session with Merkel on Friday. “For this,” he continued, “we count on the support of friends across the world and in particular Germany.”

That support, it looks like, will work both ways.