German Chancellor Angela Merkel's impromptu visit to Istanbul on behalf of the EU was highly criticized as a desperate gift to President Recep Tayyip Erdogan as Turkey's elections draw close. 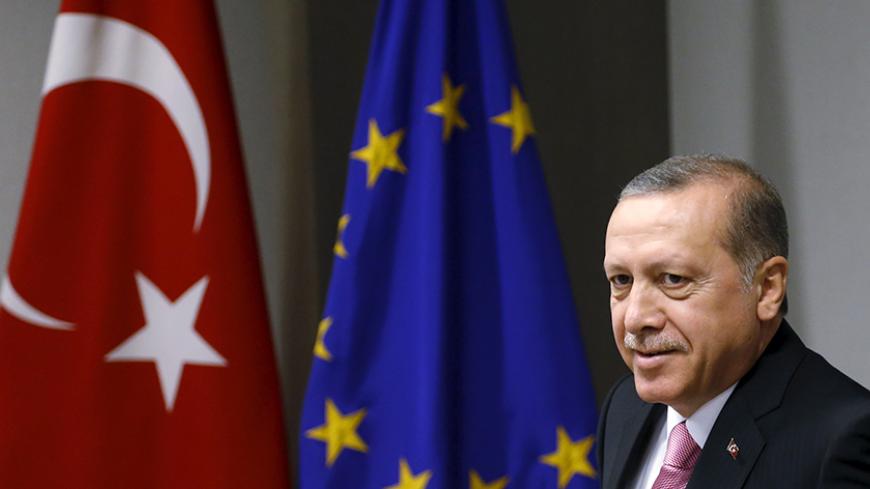 It is only a week before the snap elections and in Turkey, nobody really remembers that Germany’s Angela Merkel was in Istanbul on Oct. 18. Yet, despite their reputation in this regard, this cannot be explained by the infamously short memory of Turks.

Turkish President Recep Tayyip Erdogan received Merkel pompously, but their meeting was held in a former Ottoman setting in Istanbul instead of his new notorious palace in the capital, Ankara. To remind her of past Ottoman grandeur — or perhaps to remind himself that he is the heir of the glorious Ottoman sultans — Erdogan had Merkel sit next to him, each of them in gilded armchairs embellished with kitsch pseudo-imperial decorations.

That picture contrasted sharply with the plainness of Merkel's recent reception of Erdogan in Berlin, where they sat on simple chairs.

While Merkel was in my town of Istanbul, I was in her capital, Berlin. I noticed extraordinary coverage on the day of her visit, and the day after as well.

The leading German dailies, including Frankfurter Allgemeine Zeitung, Süddeutsche Zeitung, Die Zeit, Welt am Sonntag and Tagesspiegel, published full-page reports and commentaries on Turkey. Their reports on the whole were harshly critical of Merkel’s mission and chastised the EU for trading its moral high-ground “principles” for “realpolitik.”

The EU and particularly Merkel have been bewildered in the face of the endless flood of Syrian and other Middle Eastern-Muslim refugees pouring through the gates of “Fortress Europe.” And Turkey is a formidable gatekeeper.

Erdogan, a clever politician who has been cold-shouldered by the Europeans for some time, can naturally extract the most favorable outcome from the crisis for his ambitions. He has proved himself to be a good horse trader, and any support he might be asked for would not come for free.

Merkel’s visit is seen by the German media, and the Western press in general, as a gift to Erdogan on the eve of the snap elections Nov. 1. Erdogan hopes to regain the majority for his Justice and Development Party (AKP) that it lost in the June elections.

Another gift to Erdogan is the delayed release of the annual European Commission Progress Report on Turkey. The report was to be issued Oct. 19, but its publication has been delayed indefinitely. The reason is obvious: Its content is expected to be critical of the Turkish government's violations of freedom of expression and freedom of the press.

The influential German daily Die Welt on Oct. 25 speculated that the report, if published as scheduled, would have triggered a new wave of criticism against Erdogan and the government ahead of the crucial elections.

That response to the delay didn't come only from German circles. Prestigious watchdogs on human rights issues also expressed their reservations about Merkel’s gift to Erdogan. Emma Sinclair-Webb, Human Rights Watch's senior researcher in Turkey, reacted with an article titled “No, EU, Turkey is not safe for everyone.”

She noted the EU's willingness "to soft-pedal Turkey’s abusive rights record in exchange for its cooperation in stopping asylum seekers and migrants." The action comes, she said, "at a time when human rights and the rule of law in Turkey are at the worst level I’ve seen in the 12 years I’ve worked on Turkey’s human rights."

She also said in the article, “Keeping refugees in a country that cannot be described as safe for them, and limiting access to asylum in Europe for Turkey’s own citizens when they may need it most, risks contributing to greater instability within Turkey. Will this be the EU’s poisonous contribution to Turkey’s future?”

Only 48 hours before Merkel’s visit, EU leaders hastily met in Brussels to adopt an “action plan” for Merkel to present to Turkey. The plan calls for raising financial aid from 1 billion euros to 3 billion euros for Turkey's role as EU border guard.

The EU leaders, and the “first among equals” Merkel, seem so desperate that they are ready to present the compromises they had declined during Erdogan’s visit to Brussels only a few weeks ago. Al-Monitor readers might have been misled by my previous article on the issue, in which I wrote that the Turkish president could not get carte blanche from the EU during that visit. It did not take long for the EU to change its stand. Merkel rushed to Istanbul with an “indecent proposal” of 3 billion euros in exchange for Turkey keeping the European zone free from the incessant flow of Syrian refugees.

Sacrificing Europe's principles regarding democracy and human rights for the imperatives of the realpolitik, one week prior to Turkey’s elections, does not seem likely to achieve the EU's objective.

First, Turkey is not really enthusiastic to relieve the burden on Europeans despite the 3 billion euros ($3.3 billion) in aid, as that amount is too little, too late. Second, it is far from certain that Erdogan, after the election, will be in a position to deliver what the Europeans and Merkel have asked of him.

It’s not just because Erdogan may emerge from the snap elections weaker, but rather because Merkel's actions indicated that Erdogan’s horse-trading tactics could wring even more concessions from the ever-desperate Europeans. A weaker Erdogan cannot deliver what Merkel needs, and a stronger Erdogan will not deliver until he bends the Europeans more to his favor.

Western critics of the EU position need not worry about the impact of Merkel’s trip. Turkey is so polarized that Merkel’s trip has no influence whatsoever on the voting tendencies of the Turkish electorate. Nobody even remembers her visit; it has no hope of boosting Erdogan’s chances.

The real problem for the EU is in its future relations with Turkey. When the EU really needs partners to cooperate in Turkey, mostly for practical reasons like stemming the tide of Syrian refugees, it will have difficulty finding them. After sacrificing its principles, the EU will have lost the trust of the staunchest pro-EU circles in Turkey.

In terms of realpolitik, Turkish-EU relations are certainly no better following Merkel’s brief political flirtation with Erdogan in Istanbul.