How Erdogan is dragging Merkel down with him

German Chancellor Angela Merkel has given in to Turkish President Recep Tayyip Erdogan, even after his harsh remarks equating German authorities' practices with those of the Nazis. 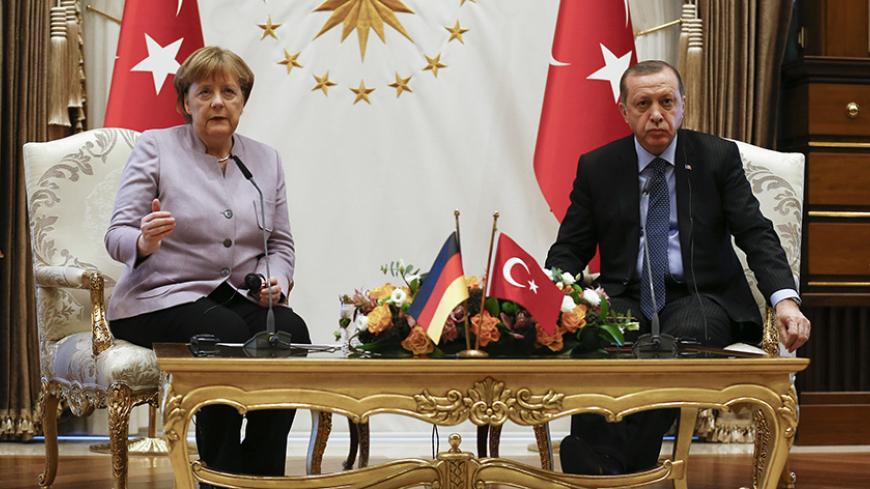 During the first years of his meteoric political career, Turkish leader Recep Tayyip Erdogan liked to use the phrase “win-win.” That was when he was seen as an asset for a multitude of leaders around the world, thanks to the image he promulgated: that of a forthcoming political neophyte leading an aspiring nation and an ascendant country in the international system.

Today, he is seen as more of a liability with no real friends, increasingly relying on the loyalty and the blind faith of his ever-narrowing and inward-looking, xenophobic power base in Turkey.

His last diatribe, where he likened the German administration to Nazis, should be seen and analyzed in a broader perspective. He is coming out of the unprecedented intoxicated climate in relations with Germany as a loser.

But he is not the only loser. On the German end of it is Chancellor Angela Merkel, the Western world’s liberal hope — probably a misleading term — following Donald Trump’s presidential election victory in the United States.

Erdogan is dragging Merkel down with him. The German chancellor, once the most powerful politician in Europe, is rapidly moving to seal her political fate as a loser thanks to her misguided policies vis-a-vis Erdogan. The Turkish president’s “win-win” policy has been replaced with a zero-sum game, and this is inevitably producing other losers along with him. The most prominent potential loser is Merkel.

The misguided attitude of the German chancellor is not to deny the Turkish president’s and Turkish ministers’ right to campaign in Germany, as some myopes want to see it. On the contrary, the problem is her appeasement of Erdogan. Even after Erdogan’s harsh words accusing Germany of repeating Nazi practices — a psychological red line in contemporary German politics — she gave in. Merkel announced that the Turkish leaders could campaign and hold rallies in Germany for Turkey's April 16 referendum on an executive presidency if they notify the authorities in a timely manner and respect German law.

That is no more than taking a step back and displaying weakness in front of a furious and aggressive Erdogan. Turkey’s president, rightly, can turn to his own audience within Turkey and claim victory against Germany. In his followers' minds, he will be vindicated. But this may cause Merkel to lose power to Martin Schulz, the new leader of the Social Democratic Party who was an ardent critic of Erdogan’s policies when he was president of the European Parliament. The latest polls have the Social Democrats leading the Christian Democrats for the first time since Merkel became chancellor in 2005.

The once-invincible Merkel will lose because of her appeasement of Erdogan, a winner in terms of leading Turkey into totalitarianism but an eternal loser who most likely will be portrayed in history alongside tyrants.

Merkel's appeasement of Erdogan started with the refugee crisis that emerged in 2015 and 2016, which led to a refugee deal in March 2016. The way Merkel dealt with the issue triggered a populist-nationalist “white supremacist” far-right backlash in Europe. But her ongoing appeasement, despite Erdogan’s “Nazism in Germany” accusation, will arouse the outrage of liberal and democratic opinion, albeit somewhat weakened, in the Western world. The synergy that would derive from these two opposing dynamics of left and right might bring about her demise.

The influential German weekly Der Spiegel recently showed great acumen by saying in an editorial, “The fear that Turkish President Recep Tayyip Erdogan might cancel the refugee deal and allow masses of migrants to make their way to Germany has shackled Angela Merkel’s policies toward the autocratic leader. It is time to come up with a European solution that decreases our dependence on Turkey.”

This, in other words, is a confession that unless the European Union comes up with a plan B, Merkel will be shackled to Erdogan and thus will be among those contributing to Turkey’s drift into the shadows of autocracy.

One prominent European appeaser of the Turkish regime, former Swedish Prime Minister and Foreign Minister Carl Bildt, tweeted that while the German ban on Turkish ministers' campaigning in Turkey may be questionable, accusing Germany of “Nazism” is unacceptable.

Would Merkel swallow and digest a diatribe that even Bildt finds unacceptable?

Der Spiegel’s editorial legitimately asked the same question in a different manner: “Erdogan wants to hold a major speech in Germany soon. He hopes to use it as an opportunity to promote proposed changes to the Turkish Constitution that would be a decisive step in transforming his country from an autocratic, despotic state to a dictatorship. It is the height of chutzpah. The Turkish president wants to take the advantage of our freedom of assembly and expression to promote the elimination of precisely those civil liberties in Turkey. Must we accept this?”

Erdogan’s remarks infuriated the German polity. Christian Social Union Secretary-General Andreas Scheuer, Merkel's Bavarian partner, said of Erdogan to the Passauer Neuen Presse newspaper, “The despot of the Bosporus got out of control.” For German Justice Minister Heiko Mess, a Social Democrat, Erdogan’s remarks were “abstruse, malicious and absurd.” For Merkel’s chief of staff, Peter Altmaier, they were “absolutely unacceptable.”

Merkel’s top lieutenant in the German parliament, Volker Kauder, also took part in the chorus of reaction to Erdogan’s accusation, telling the German TV channel ARD, “Nobody can outdo Germany in terms of rule of law, tolerance and liberalism. There is no reason whatsoever for us to accept such accusations or advice from anybody.” He added, “It’s an incredible and unacceptable turn of events that a leader of a NATO country talks this way about another NATO country, especially one who has considerable problems with the rule of law.”

Yet as long as Merkel wavers on how to deal with Erdogan, all these statements cannot go further than being empty talk. This is not enough to stop the way that Erdogan, making his cost-benefit calculations, deals with Germany. That is the way he operates.

The co-chairman of German Greens, Cem Ozdemir, of ethnic-Turkish origin, stressed that Germany lacks a common Turkey strategy. He told ARD that Turkey is important for Germany and that keeping it away from Russia, Islamism and ultranationalism is in the interest of Germany. But he differed with other German leaders on what should be done about Turkey. He emphasized that Turkey’s democrats should not be abandoned by Germany and that Germany should ask Turkey to make a democratic gesture, freeing jailed opposition politicians and journalists. For allowing the Turkish leaders to campaign on German soil, he proposed that Turkey reciprocate by letting German leaders hold rallies in Turkey, “for example, in Taksim Square in Istanbul,” calling for the freedom of Turkish intellectuals and opposition politicians.

This could be a German-European approach to Turkey that is diametrically opposed to appeasement. In history, appeasement has not brought desired results to its proponents. British Prime Minister Neville Chamberlain essentially presented the Sudetenland, in then-Czechoslovakia, to Hitler to avert war. It emboldened Hitler, and the German chancellor attacked Poland, triggering World War II.

Today’s German chancellor and the EU should unchain themselves from a refugee deal emboldening a Turkish leader who is suppressing every iota of opposition in order to consolidate an autocratic regime.

The Turkish-German flare-up has an impact on Turkey’s relations with the entire EU, which is the most important trade partner for Turkey. In January, almost half of Turkey’s exports, 47%, were to the EU. Germany was the No. 1 export destination for Turkey, accounting for 10% of all Turkish exports.

Therefore, if Germany stops appeasing Erdogan’s Turkey, it can have a decisive impact on the fortunes of the quest for an autocratic Turkey.

Liberating themselves from being hostages of the refugee deal is in the tactical interest of both the EU and Germany. Blocking Turkey’s drift to autocracy is in their strategic interest as well.