Turkish-German friction on allowing German parliamentarians to visit Incirlik Air Base could have serious ramifications in terms of complicating NATO plans to combat the Islamic State. 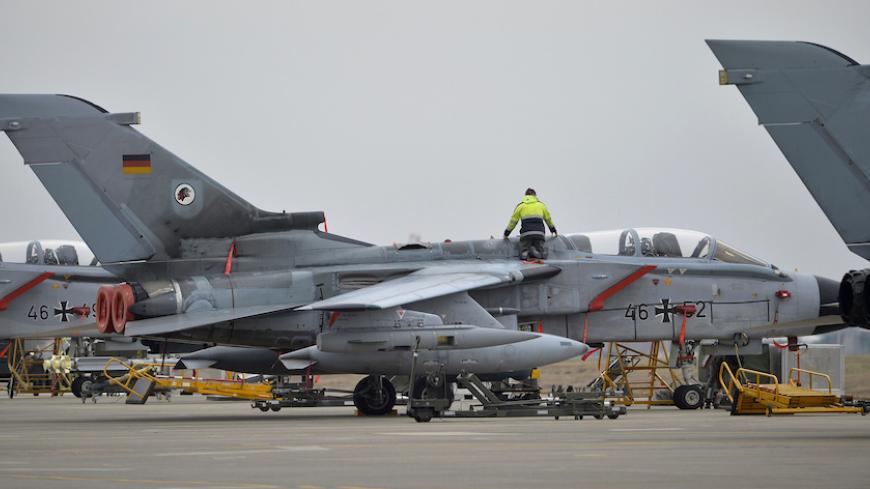 A technician works on a German Tornado jet at the air base in Incirlik, Turkey, Jan. 21, 2016. - REUTERS/Tobias Schwarz

Anybody who thinks Turkey needs Europe more than ever to extricate itself out of its diplomatic isolation would be misguided. If there is one unequivocal consequence of Turkey’s recent dual reconciliation with Russia and Israel, it is enhanced self-confidence to stand up to the European Union.

The shortcut to standing up to the European Union does not lead to Brussels but rather to Berlin. As long as the “strong lady” of Europe professed a visible soft spot in her dealings with Turkey due to her need for a deal to stem the refugee flow across the Aegean, Turkish President Recep Tayyip Erdogan behaved relatively mercilessly toward Germany and through it, toward the EU when he felt it was necessary to alleviate the sentiments of his nationalist constituency at home or to deter the Europeans from pursuing any sort of policies that he thinks may impair Turkey’s interests.

Erdogan did not have much leverage with the Europeans. However, he now believes that he does, particularly after reconciling with Israel and primarily with Russia. His room for maneuver in foreign policy has expanded considerably. Feeling emboldened during the recent NATO summit in Warsaw, he challenged the demand of the German parliament to send a delegation to visit German military personnel deployed at Incirlik Air Base for the coalition effort against the Islamic State.

The controversy of a German parliamentary delegation visiting German military personnel at Incirlik has been looming for some time. German Defense Ministry Undersecretary Ralf Brauksiepe was denied a visit to Incirlik by Turkish authorities.

The explanation offered by Turkish Foreign Minister Mevlut Cavusoglu was cynical. “Military and technical delegations could come to Incirlik. But we do not see visits to Incirlik by nonmilitary personnel, especially politicians, as appropriate,” he said. In response, German Defense Minister Ursula von der Leyen put up a challenge and said she would go to Incirlik and see the German military personnel.

The issue was taken up at the highest level between Erdogan and German Chancellor Angela Merkel during the recent NATO summit. Erdogan set a condition for such a visit that no European political leader could accept: He asked Merkel to state that the recent Bundestag resolution on the Armenian Genocide of 1915 does not reflect the view of the German government she heads.

Even if she might not agree with the German parliament’s decision, she could not do it. In no democratic European country could the executive declare itself totally insensitive to the legislative branch. For Erdogan, who believes in a strong executive, what he asked seems very reasonable. However, such a cleavage does not exist in Western European political culture.

Naturally, no compromise on the issue resulted from the meeting of two leaders. Merkel tried to keep her head high and played down the disagreement. She spoke to the German ZDF television channel and said, “Disagreements cannot be overcome in one meeting.”

Such an explanation seems far from mitigating the discontent of the German politicians who had expected she could resolve the Incirlik issue with Erdogan. However, her inability to do so is bringing further pressure from the German legislators to the extent that Germans began to consider withdrawing the German military personnel from Incirlik altogether.

According to the German official news source Deutsche Welle, Andreas Scheuer, secretary-general of the Christian Social Union in Bavaria, which is the sister party of Merkel’s Christian Democratic Union, told the German daily Tagesspiegel, “The soldiers and the bases of an army of a parliament can be visited always and wherever they are by parliamentarians. Because of his attitude, Erdogan will cause the withdrawal of the German military (from Incirlik).”

The notion of a military subservient to the legislative organ, in this case the German Bundestag, is alien to Turkish thinking.

A spokesman of Merkel’s coalition partner the Social Democratic Party, Niels Annen, also told Tagesspiegel that Merkel should get the commitment of Erdogan in order to gain the access of German parliamentarians to the base in southern Turkey.

In addition, a former chief of staff of the German military, Harald Kujat, told the daily Ruhr Nachrichten that Ankara’s position was “unacceptable.”

Incirlik Air Base has a squadron of German Tornado aircraft and 240 German military personnel deployed to contribute to the coalition against IS.

The German military presence at Incirlik, despite its modest numbers, is significant in terms of asserting Germany’s determination to emerge from 70 years of postwar restraint to play a greater military role on the world stage.

Merkel recently promised to increase military spending from 1.2% of GDP to close to the NATO preference for 2%. She believes that Germany should step up because of the threats facing Europe.

This writer, who participated in a closed roundtable conference in London on July 11, was privy to information presented by a high-ranking British official who had just returned from the NATO Summit in Warsaw that the alliance discussed at length the threat emanating from the “South” — meaning the south of Turkey, implying mainly the Islamic State (IS) or jihadi threat. In terms of confronting such threats, the deployment of AWACS warning and control aircraft to Incirlik Air Base is being planned. The AWACS aircraft would be manned by German military personnel and would monitor Iraqi and Syrian airspace on behalf of the alliance.

Therefore, the Turkish-German friction on the issue of letting German parliamentarians visit Incirlik, if it remains unresolved, could have serious ramifications when it comes to NATO's plans to combat IS.

Equally, it could have a bearing on the place of Turkey in the Western alliance during the upcoming period.

How and when they might be resolved is far from certain, but Erdogan seemingly is assured of two things:

He also regards it as leverage he could use not only vis-a-vis Europe but also — if need be — the United States.