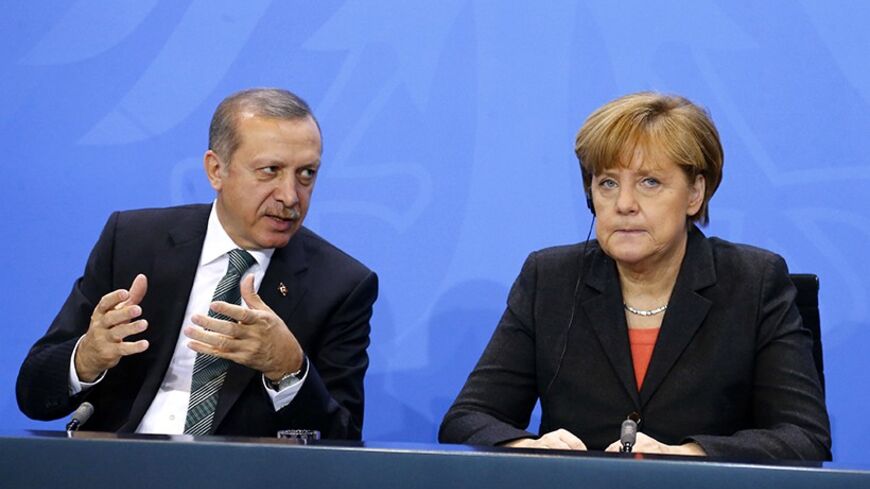 A Turkish Prime Minister Recep Tayyip Erdogan hungry for votes — he has not announced his candidacy for the presidency, but is likely to — and angry with Germany over strong criticism of his policies by President Joachim Gauck during Gauck's recent visit to Turkey, is heading to Germany.

May 24 may be a crucial date, as he will appear before the Turkish community in Cologne to further his presidential ambitions and also promote Turkish-German (Turkish-European Union) relations.

Particularly in the wake of the mining disaster in Turkey that tarnished the prime minister’s image further and attracted very harsh criticism from the German press, this will be a controversial, troublesome visit to Germany. Erdogan is an unwelcome visitor for members of the German political class, irrespective of their political inclinations.

Right after his undiplomatic — to say the least, if not impolite — remarks about the German president, who has strong human rights and democratic credentials, Deutsche Welle in its roundup of German press comments commented, “The notion that Erdogan will be visiting Germany is almost unbearable for many German politicians. Rarely have so many representatives of so many different parties commented on the visit of a foreign leader — and rarely has there been so much agreement.”

Julia Klockner is the deputy chair of Germany's Christian Democratic Union and has called for Turks to boycott the May 24 visit. "I only wish that as many Turks who live here as possible show, through their absence, that they don't agree with his current actions in Turkey," she told the German weekly Welt am Sonntag.

But for German Green Party leader Cem Ozdemir, who himself is of Turkish origin, such an appeal will have little effect.

Ozdemir, who knows Turkey and his German compatriots of Turkish origin better than any other German politician, spoke to German public radio broadcaster Deutschlandfunk and said, “The people who are against him are going to be against him anyway, and those who idolize him will continue to be his fans, and will now, more than ever, probably make a pilgrimage there."

Actually, Erdogan’s Germany trip had been planned much ahead of time and was primarily to win expatriate Turkish votes in Europe. Despite his success in the March 30 local elections, Erdogan is 5% short of the votes needed to carry him to the presidency in a two-round election in August. The Turks for the first time will elect their president and Turkish citizens living in Europe, for the first time ever, will be able to vote wherever they are. According to Turkey’s High Election Board, there could be 2.7 million expatriate votes — about 5% of the electorate — with the 1.5 million Turkish citizens in Germany representing by far the largest share, and this is exactly what Erdogan is targeting.

But Erdogan is a controversial figure not only in Turkey but also in Germany, where the Turks constitute the largest non-German community. For instance, the Alevi community, critical of Erdogan and his Justice and Development Party (AKP), has called for a demonstration in Cologne in opposition to Erdogan's visit. Under the motto of "We say no to Erdogan," Turkish and Kurdish Alevis are preparing to protest the visit in Cologne's city center. Erdogan, they say, is interfering with domestic German affairs and provoking those in Germany of Turkish origin.

The controversies he will carry with him to Germany are a matter of concern for the German political class, which is uneasy about his potential destabilizing impact on Germany’s internal order.

That is why his planned appearance in Cologne has drawn criticism from all parts of the German political spectrum. The CSU has called on Erdogan to cancel the event. But the unanimous negative response is turning into interparty bickering. Conservative politicians, who have been the loudest in their criticism, are now being reminded by the Greens of their continuing reluctance to allow dual citizenship.

The German government has been communicating its stance as diplomatically as possible. It expects "sensible, responsible conduct," said German Chancellor Angela Merkel. As a matter of fact, Merkel’s spokesman Steffen Seibert told reporters in Berlin that Erdogan, as the prime minister of a "really close and important partner" nation, was welcome in Germany, adding, “The German government expected Erdogan to choose his words carefully" at what he described as a "difficult" time.

German Foreign Minister Frank-Walter Steinmeier said that Erdogan was welcome to speak in Cologne, assuring with a certain self-confidence, "Our democracy can withstand this." He also added, though, that he expected Erdogan to "comply with international norms" when he delivers what is expected to be a campaign speech.

While angling for Turkish votes, will Erdogan be able to avoid jeopardizing further the already damaged and tense Turkish-European relations? Everyone should know that Erdogan is the sort of a politician who may recklessly create friction and play the nationalist card if he thinks it will enhance his presidential chances.

After the Soma disaster that cost 301 workers' lives — the worst in Turkish mining industry history — Erdogan has seen his political support fall. The opportunity to address Turkish guest workers in the German industrial heartland of Ruhr may compensate for what he lost in Soma. Or his political expedition to Cologne may end up as politically disastrous as the one to Soma.

May 24 may be a turning point for Turkey.