The German parliament's historic resolution on the Armenian genocide led to predictable responses from Ankara while creating further uncertainty in Turkey's relations with the West. 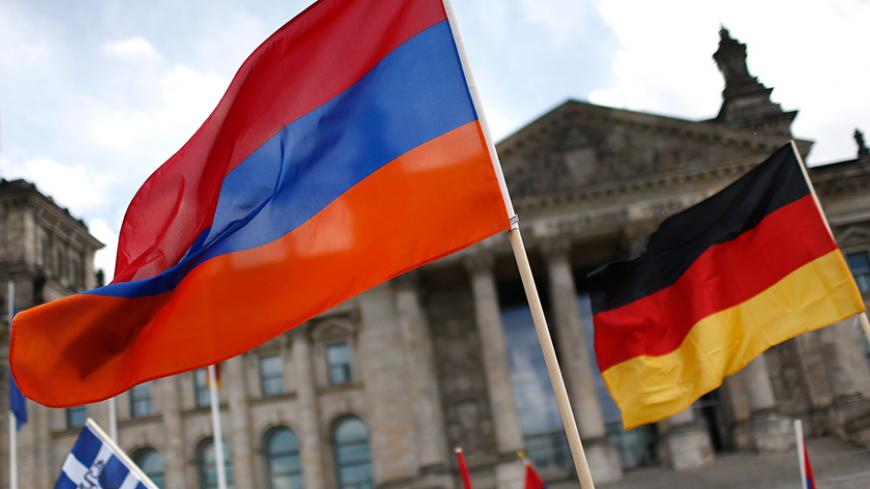 Supporters wave Armenian and German flags in front of the Reichstag building as they demonstrate in favor of a symbolic resolution by the German parliament that declares the 1915 massacre of Armenians by Ottoman forces a genocide, in Berlin, June 2, 2016. - REUTERS/Hannibal Hanschke

The German parliament's (Bundestag) recognition of the tragedy that had befallen Ottoman Armenians in 1915 as genocide was no surprise. Everyone knew it was coming.

And yet disbelief characterized the Turkish government's response to the German action. It was such a disbelief that Turkey’s staunchly Erdogan-loyalist new Prime Minister Binali Yildirim, just a few minutes prior to the vote at the Bundestag, referred to his conversation with his German counterpart, Chancellor Angela Merkel.

"There is a vote at the German parliament … They intend to hold us responsible for the events of 1915. When desperate situations arise in politics, such bright ideas come to mind. This is one example. I told Angela Merkel, 'Germany is a strong ally of Turkey; as such, we hope it will not be involved in such an irrational act.' She said to me, 'We will do our best.' And I told her that nothing can happen there [the Bundestag] despite her wishes. We'll see what happens. Germany is passing through a real test of friendship," Yildirim said at a party meeting.

Worse, Merkel proved to be a non-entity when it comes to confronting the Bundestag and diminished her reliability in the eyes of Turkish authorities, who are reluctant to work with the European Union (EU) in the future.

Only a day before the German vote, Yildirim had referred to what had happened to the Armenians in 1915 as an "ordinary event." President Recep Tayyip Erdogan went further. In an intimidating tone toward Berlin, he asserted that Ankara has no problem whatsoever with what he labeled "the so-called Armenian genocide." If the draft would pass the Bundestag, then all relations with Germany will be impaired.

Such intimidation by Turkish authorities may have been prompted by the signing of the refugee deal with the EU — the agreement was Merkel's brainchild. Especially Merkel’s "realpolitik," in which she appeared excessively appeasing toward Erdogan at home and abroad, probably motivated German legislators to pass the bill, which was postponed before and not discussed during the genocide's centennial anniversary last year.

The draft law that was put into vote only two months ago was brought to the Bundestag jointly by Merkel’s Christian Democratic Union; its main Bavarian ally, the Christian Social Union; its coalition partner in government, the Social Democrat Party; and the opposition Greens, whose co-chairman, Cem Ozdemir, is of Turkish origin. Originally, the draft had been prepared by former communists Die Linke (The Left).

For days, Turkish nationalists campaigned against the resolution and a planeload of them had traveled to Berlin to demonstrate in front of the Bundestag. Berlin is home to one of the largest conglomeration of Turkish people outside Turkey — almost 300,000 Turks (including those of Kurdish origin) reside in Berlin. The campaign against the draft law even involved Ozdemir's harassment, who disclosed publicly that he has been personally threatened.

That the Armenian genocide resolution was accepted in the Bundestag after such a heated contest is significant. There was only one abstention and a single vote against it.

This result, naturally, is a blow not only to Erdogan's standing in Turkey, but also to the prestige of Merkel and her Social Democratic Foreign Minister Frank-Walter Steinmeier, because both had implied that it would be unwise for Germany to adopt such a resolution at a time when they need the Turkish government's cooperation over the refugee deal. Merkel mentioned putting the resolution to vote at the Bundestag "an unfortunate coincidence."

In contrast to Merkel, Ozdemir — the Green of Turkish origin and leading pioneer of the resolution — emphasized how "historical facts should not be concealed because of possible consequences of passing such a resolution." The Bundestag's Foreign Relations Committee Chairman Norbert Rottgen from CSU, who is at the political opposite of the Greens, said, "When it is a matter of genocide, diplomatic sensitivities should come to an end."

German President Joachim Gauck, who enjoys a reputation for his conscientiousness and his work as a human rights advocate, had already called the events in 1915 genocide during its centenary in April 2015.

Although it is not legally binding, the resolution that the Bundestag passed not only recognizes the events of 1915 as genocide, but it also opens the way to modify how it is written in German textbooks.

Probably one of the most interesting and important aspects of the Bundestag resolution on the Armenian genocide is its mentioning Germany as "a partner in crime" of the Ottoman-Turkish government of the "Young Turks," and thus accepts to face its own history in a self-critical way — similar to the way it had done with acknowledging Germany's irrefutable responsibility for the Holocaust during World War II.

Consequently, the resolution — while underlining the "uniqueness of the Holocaust" — places the Armenian genocide in the same category and puts some of the responsibility on Germany's shoulders.

Hence, the Bundestag's genocide resolution serves as an important document and a reference point in transitional justice, elevating Germany to a moral high ground.

So far 23 countries — among them France, Italy, the Netherlands, Belgium and Switzerland — have adopted similar resolutions. But Germany's position is special in this respect, because it was the country that took part in atrocities that go back to 1915 as the major ally of Ottoman Turkey. Furthermore, Germany has a leading status within the EU, hosts more than 2 million Turkish nationals and enjoys other bonds with Turkey, especially as its largest foreign trade partner.

From the viewpoint of Armenians — especially those in the diaspora, who for decades have made the recognition of the genocide the main component of their identity and an almost existential issue — Germany's recognition is considered the "last exit before Washington."

Because more than anything else, the recognition of 1915 as genocide by the US Congress would be the crown jewel for Armenian efforts.

Could that happen one day? That's too early to tell, but obviously the German legislative body's decision will inform other Western countries' actions.

The repercussions from Turkey have been as predicted. Three of the four parties that are represented in the parliament — with the exception of the pro-Kurdish Peoples' Democratic Party — protested the Bundestag resolution.

Yildirim accused Germany of succumbing to the Armenian lobby. The Turkish ambassador in Berlin was recalled and returned to Turkey on the evening of the day the resolution passed.

Meanwhile, Erdogan said the resolution will have a very serious impact on Turkish-German relations at every level. As a first step, he reminded everyone of the ambassador's recall. Despite his well-known fiery rhetoric, his initial reaction could be termed muted.

On the German side, Merkel was quick to define the bilateral relations with Turkey as "strong." Understandably, she was trying to downplay the drama and preserve the refugee deal. Her political career is obviously tarnished from all her dealings with Erdogan; she probably wants to prevent further damage.

So how would the German parliament's resolution affect Turkish-EU relations?

A day before the vote, President of the European Commission Jean-Claude Juncker, a Merkel protege, had warned the Turkish government not to overplay its hand and think twice before taking a dramatic step. The Europeans, it seems, calculate that Turkey does not have much room to maneuver in the bilateral game.

The first 24 hours displayed the predictable nervousness on the Turkish side, but nothing beyond that. Even Erdogan was not harsh and tough, which he usually is. The Turks might actually be thinking twice.

If in the coming days and weeks no dramatic moves come out of Ankara, the resolution of the German Bundestag will be registered as yet another defeat inflicted on Turkish foreign policy in 2016.