The German resolution recognizing the 1915 Armenian genocide highlights Israel's refusal to do so and its preference of political considerations over a moral stance. 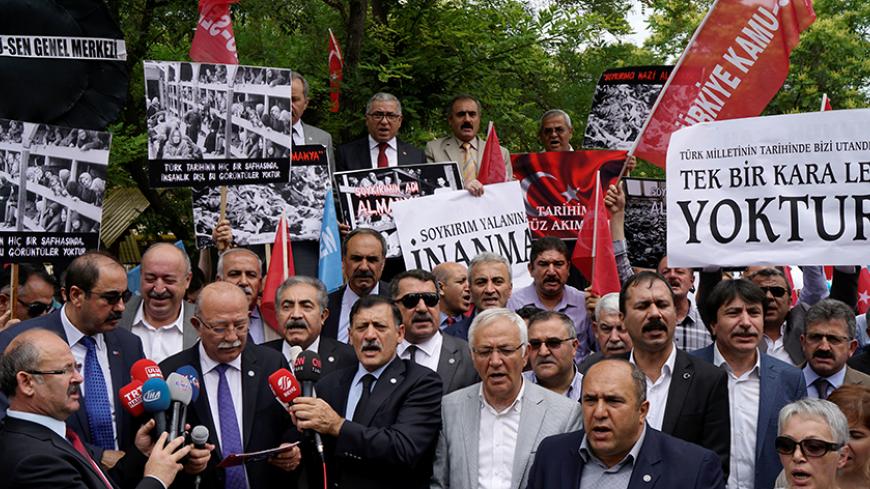 Turkish demonstrators stage a protest against approval of a resolution by Germany's parliament that declares the 1915 massacre of Armenians by Ottoman forces a "genocide" in front of the German Embassy in Ankara, June 3, 2016. - REUTERS/Umit Bektas

News broadcasts on Israeli TV June 2 were dominated by two stories. The first reported that the German parliament had voted to recognize the World War I massacre of Armenians by the Ottoman Turks as genocide. The resolution was approved by a majority of lawmakers from all parties, headed by Chancellor Angela Merkel’s Christian Democrats. In response, Ankara recalled its ambassador from Berlin “for consultations.” The second news report heralded a breakthrough in negotiations between Israel and Turkey on settling the 2010 Mavi Marmara flotilla crisis and easing the blockade of the Gaza Strip. Officials in Jerusalem predict the Turkish ambassador, who was recalled back to Ankara at the time, will soon be reinstated in Tel Aviv.

Reacting to the German Bundestag’s decision, Turkish Foreign Minister Mevlut Cavusoglu accused Germany of an “irresponsible and groundless” stance vis-a-vis the history of another nation. He wrote on Twitter that Germany’s decision was motivated by a desire to “close the dark pages” of its own history. The state of the Jewish people, whose blood is saturated with German history, prefers the more noncommittal term “tragedy” — in official communiques — in describing the disaster that befell the Armenian people. Not only that, but Israel mobilized American Jewry in a campaign to thwart US recognition of the genocide carried out by the Turks against the Armenians.

In October 2007, several weeks before the vote in Congress, the Anti-Defamation League (ADL), one of the most prominent Jewish organizations in the United States, announced a change in its position on this sensitive issue and agreed that the massacre of up to 1.5 million Armenians was a genocide. The Turkish prime minister at the time, Recep Tayyip Erdogan, picked up the phone to then-President Shimon Peres and asked him to intervene. Following Peres’ intervention, the ADL recanted and issued a toned-down version of its original announcement.

At a special July 2015 session of the Knesset’s Committee on Education, Culture and Sports to mark the 100th anniversary of the massacre, the panel’s chairman, Knesset member Yaakov Margi of the Shas Party, said, “It is incumbent on the Jewish people to commemorate the murder carried out against the Armenian people in order to educate future generations and understand the historic processes so as to prevent an additional genocide.” The Shas Party lawmaker called on the government to recognize the Armenian genocide and urged the Knesset to adopt a historic resolution in keeping with Jewish values. Knesset Speaker Yuli Edelstein of the Likud Party promised to “make an effort to promote the issue, and I sincerely hope the members of Knesset will know how to vote at the moment of truth.” That moment has yet to arrive and is unlikely to do so in the foreseeable future. To quote Oded Yosef, the Foreign Ministry representative who took part in the Knesset committee’s debate, “focusing on terminology is political and it diverts us from relating to the issue.”

True, everything is politics. The blueprint for extracting and using Israel’s natural gas reservoirs is a good example. At a December 2015 debate by the Knesset’s Economic Affairs Committee on this politically, socially and economically charged issue, Prime Minister Benjamin Netanyahu said, "We have had contacts with Turkey. A personal envoy of mine spoke with a very senior Turkish government official. They discussed the possibility of Israeli gas exports to Turkey and through Turkey.” Netanyahu took a long and convoluted path for the sake of his gas plan. To open up the Turkish market to Israeli gas exports, he would not hesitate to let Erdogan get his foot in the door of the Israeli-Arab peace process — Turkey has stipulated that normalization with Israel would be conditioned on lifting the blockade on Gaza, for instance — and by doing so he stepped on the toes of Egyptian President Abdel Fattah al-Sisi, who views Turkey as a bitter rival.

The “collateral” benefit of the reconciliation with Ankara will be ensuring that Hamas does not get any credit for the easing of restrictions on the residents of Gaza. After all, Israel does not talk with Hamas, let alone compromise with them. And when all is said and done, Israeli gas is not likely to be heating the homes of Turkey’s inhabitants. Russian President Vladimir Putin, with whom Netanyahu is seeking to curry favor, is adamantly opposed to the transfer of gas from Turkey to Europe. The Cypriot administration has rejected the idea of laying an underwater pipeline from Israel’s offshore Leviathan gas field through its territorial waters, not to mention the technical challenge of installing a 485-kilometer (301-mile) deep water pipeline.

Israel also has political interests in Muslim Azerbaijan, Armenia’s enemy. According to reports, Azerbaijan supplies Israel with 40% of its oil consumption and buys from it billions of dollars’ worth of military and other equipment. A display of empathy for the Armenians risks angering the Azeris, who conducted heavy fighting with the Armenian army along their front line in the secessionist region of Nagorno-Karabakh April 2. You might say that it is only natural for states to act according to their interests and not be guided by moral considerations, such as identifying with the tragedy of another nation. That said, why should Netanyahu complain that the powers supported the nuclear agreement with Iran in accordance with their interests and did not heed his warnings of a “second Holocaust”?

The focus on the atrocities committed by Turkey in 1915 and 1916 diverts attention from its cruelty in 2015 and 2016. While demanding that Israel compensate families whose loved ones were killed in a pointless and negligent military operation, when Israeli commandos boarded the Gaza-bound Mavi Marmara vessel, Turkey is deliberately bombing Kurdish population centers in the country’s southeast. That same country that is so concerned about the blockaded residents of the Gaza Strip has for months been preventing food and medical supplies from reaching Kurdish towns. The Turkish government is not allowing Turkish and international media access to the flattened towns. In an investigative report, The New York Times dubbed the humanitarian crisis in the region “the hidden war” of Turkey against the Kurds.

Germany’s recognition of the Armenian genocide, over Turkey’s furious objections, despite Berlin’s interests in ties with Ankara, underscores, justifiably so, the double standard of a state that lashes out at Holocaust deniers. Israel’s courting of Turkey’s tyrannical leader even as it ignores the bitter fate of the Kurds is a forceful illustration of the above.