On the eve of Holocaust Remembrance Day, Israelis must rethink their stance on the Armenian genocide and act out of a moral imperative, not political considerations vis-a-vis Turkey. 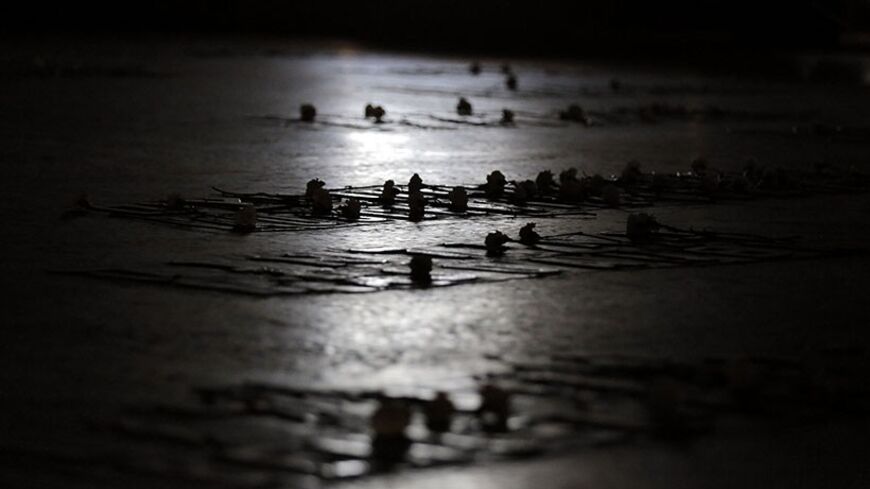 Flowers are placed at the Hall of Remembrance at Yad Vashem in Jerusalem, April 28, 2014. - REUTERS/Ammar Awad

At the Foreign Ministry in Jerusalem, the message of condolence issued by Turkish Prime Minister Recep Tayyip Erdogan to the Armenian people on April 23, the eve of the 99th anniversary of the Armenian genocide, was closely examined. What will Israel do now? Will it continue to fence-sit on the issue of recognizing the disaster that befell the Armenian people, caught between taking a moral stand and avoiding angering the Turks? If Erdogan can afford to change the Turkish attitude toward this sensitive issue, perhaps it’s time for Israel to adopt a clearer and more decisive stance.

On the other hand, how will it look for the Israeli government to be dragged along in the wake of a Turkish leader who doesn’t miss a chance to lash out at it? How will the Foreign Ministry explain a decision to recognize the Armenian genocide, after arguing for years that one must examine this sensitive issue “through an open debate based on data and facts, and not on political decisions or declarations.” This is what Likud Minister Gilad Erdan said in a 2009 speech delivered at the Knesset, asking in the government’s name to remove from the agenda the issue of recognizing the Armenian genocide.

At that same debate, Erdan said, “Israel asks not to determine conventions as to what occurred, since these are … supporting the political position of one of the sides.” Is the slaughter of the Armenians in fact a political matter? Twenty-two years ago, the deputy foreign minister in the national unity government of the late Prime Minister Yitzhak Shamir and President Shimon Peres said, “There are things that go beyond politics, and there are things that go beyond diplomacy. Holocausts of nations are a clear case in point.” These comments were made in response to a question by then-Knesset member Yair Tzaban of the now-defunct Ratz Party. He was seeking the government’s reaction to reports that Israeli officials were cooperating with Jewish-American organizations to derail a congressional initiative to mark the commemoration of the Armenian genocide in the United States. That deputy foreign minister who answered the question on the part of the government was none other than current Prime Minister Benjamin Netanyahu.

Several months later, in April 1990, it turned out that for the Foreign Ministry, the genocide committed against the Armenian people was most certainly a diplomatic issue. Under pressure from the ministry, Israel's public television station backed out of its plan to air Theodore Bogosian’s documentary “An Armenian Journey.” Following the uproar that ensued, the board of directors of the Israel Broadcasting Authority ordered that the film be screened. Representatives of the establishment appealed the decision and the film was shelved.

Despite pressure from successive Israeli governments, leftist politicians led by Tzaban and former Minister Yossi Sarid and a handful of right-wingers, among them Knesset members Benny Begin and Reuven Rivlin, refused to drop the matter. In 2011, Tzaban, this time as a private citizen, was invited to the Knesset to take part in a debate on the subject of the Armenian genocide, held by the Knesset’s Committee on Education.

“We are fighting with all our strength, justifiably so, against denial of the Holocaust, but we’re not fighting properly and not doing what needs to be done on the issue of denial of the Armenian genocide,” said the man who was formerly the minister of immigration and absorption. “We have interests; we’re not ignoring them, but we cannot do the opposite of what we have demanded that others do in our case.” In the 1940s, when we implored the world for help and didn’t get it, Tzaban said, supposedly good people told us, "You’re right, but we have interests; we have existential interests that prevent us from lending you a helping hand."

Tzaban quoted the profound lines written in 1945 by poet Natan Alterman, in “Interests”:

The Marmara flotilla affair and the deterioration in Israel’s relations with Turkey since the humiliation of the Turkish ambassador in the office of former Deputy Foreign Minister Danny Ayalon changed the interests map: Turkey out, the Armenian genocide in.

In June 2012, Erdan returned to the speaker’s podium with a new position regarding the genocide. No neutrality this time, no fact-checking or other fig leaves for economic and defense-related interests. This time, the minister determined, “There’s a problem with turning the recognition into a political debate, and the issue should be looked at from the point of view of the value of human life.” Not only that, but, “As Jews and Israelis, we should have a special obligation to learn about human tragedies.” That same government representative who had previously asked to remove the subject from the Knesset agenda announced, “It would be fitting for the Knesset to discuss it in depth and if it deems it appropriate, to express recognition of the genocide.”

This time, he did not suggest examining the data and the disputed facts, saying, “There’s something of the ridiculous in the debate, because I did not hear any historic arguments on the question of whether the murder occurred. … The government did not deal with this issue, probably out of a desire to prevent it from turning into a political issue, and it’s fitting for the government to officially recognize the holocaust of the Armenian people.”

These lines are being written on the eve of Holocaust Remembrance Day. As I do every year, tomorrow I will commune with the memory of my uncles and aunts and their sons and daughters who perished in Auschwitz. I recall that there are those in the world who deny that my family members and my people were murdered, and I congratulate those fighting against those contemptible people. True, no event in modern history can compare to the horrors perpetrated by the Nazi regime against the Jewish people, but Adolf Hitler’s deeds do not give us permission to ignore the tragedies of other peoples. We don’t require a seal of approval from a Turkish tyrant to be moral Jews.