Istanbul commemorated Jewish musicians who continued to create even when persecuted by the Nazis, in a ceremony reflecting the Turkish policy line of tolerance vis-a-vis minorities, as long as the question of Armenian genocide is not raised. 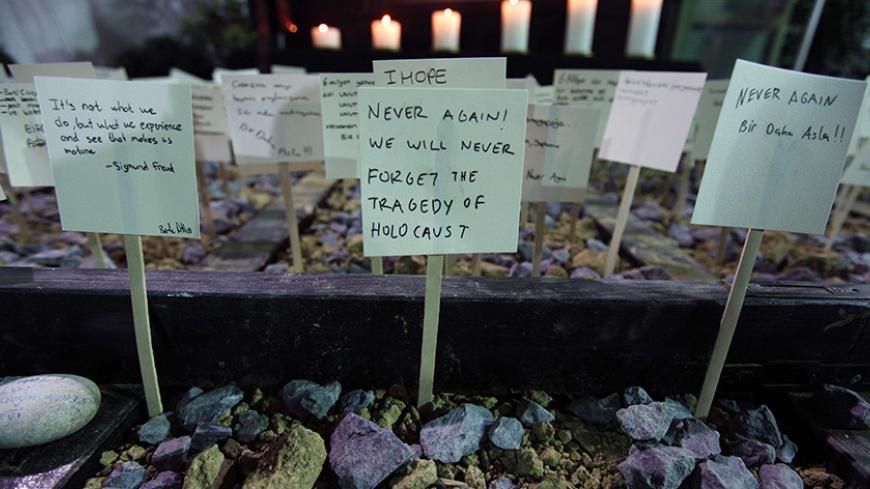 ISTANBUL — "A Memorial Concert for the Holocaust: Four Composers, Three Life-Affirming Stories” was an event sponsored by the municipal government shortly before Holocaust Remembrance Day. This Turkish city is hardly the place where such an event would be expected to be held, and certainly not outside the limited confines of the local Jewish community. It likely would not be held in normal times, certainly not on the eve of Israel’s official Holocaust and Heroism Remembrance Day, and doesn't seem a likely candidate for an event now, when the world is marking the centennial of World War I. After all, Turkey is still waging a battle of its own against even the slightest hint of recognition that the massacre of Armenians living within the crumbling Ottoman Empire was a planned and coordinated act of genocide. Simply consider what happened April 12, when Ankara responded with outrage to the statement of Pope Francis that the massacre of the Armenians was the first act of genocide in the 20th century.

Turkish-Jewish musician and musical researcher Renan Koen enlisted the help of German musical researcher Gottfried Wagner, and together they produced an audiovisual performance that focused on the lives of four Jewish composers: Pavel Haas, Gideon Klein, Viktor Ullmann and Zikmund Schul, all of whom continued to write music in the hell that was the Theresienstadt concentration camp during World War II. It is also worth noting that Gottfried Wagner is the great-grandson of composer Richard Wagner, whose works are generally boycotted in Israel because of his anti-Semitic writings and the fact that he was so admired by the Nazis.

The event was advertised extensively, but most of the audience consisted of invited guests, including diplomats serving in the foreign consulates in Istanbul, former staff members of the Turkish Foreign Ministry, academics and members of the Jewish community. I had the pleasure of attending the event as a guest of the Israeli consul general in Istanbul. The performance took place in two languages, Turkish and English. Hayri Inonu, mayor of the municipality of Sisli, one of 39 districts that make up the vast metropolis of Istanbul, sponsored the event. In his opening remarks, he commented on the remarkable ability of those musicians to continue writing music even after they were ripped from their homes, forced to subsist in subhuman conditions and lived knowing that their days were numbered and that death lurked around every corner.

The mayor, who is a member of Turkey’s leading opposition party, told Al-Monitor this was the first time that such an event took place in Istanbul. Inonu emphasized that the concert was funded by the “The Quincentennial Foundation,” whose goal he described as highlighting the deep relationship between the Jewish people and Turkey, which began when the Ottomans welcomed Jewish refugees expelled from Spain at the time of the Inquisition.

During the Holocaust as well, Turkey offered shelter to Jews who fled Germany after the Nazis came to power. Many academics’ lives were saved because they were invited to work in Istanbul’s universities. Just a few years ago, Turkey produced a film called "The Turkish Passport," which documented the efforts of Turkish diplomats to rescue Jews during World War II. Turkish politicians also often mention that Turkey was the first Muslim nation to recognize the State of Israel when it was established.

Consul General Shai Cohen stressed that a series of events marking Holocaust Remembrance Day would be held across Istanbul throughout the week, and that only some of these were organized directly by the Jewish community. According to him, the events are part of “a Turkish information campaign intended to highlight the tolerance and inclusiveness shown by the Turkish government toward minorities living in the country.”

The Turks have been making gestures to the Armenian population as well. Over the past few years, a well-funded project has been launched to restore Armenian churches scattered across Turkey, which stand as a silent testament to the vibrant Armenian society that thrived here until it was expelled a century ago. Nevertheless, the Turks are not yet willing to discuss the Ottoman government’s responsibility for the "Medz Yeghern," or "Great Crime," as the Armenians refer to it, in which 1.5 million people were slaughtered.

Last year, then-Prime Minister Recep Tayyip Erdogan surprised everyone by expressing his “condolences” over the killing of more than 1 million Armenians during World War I. This was the most far-reaching statement by any Turkish leader over the past 100 years, but the Armenians rejected it nonetheless, claiming that it perpetuated Turkey’s denial of responsibility for the genocide.

Israel has not reversed its policy on the issue even after diplomatic relations between Israel and Turkey deteriorated. Israeli President Reuven Rivlin, who called incessantly during his time in the Knesset for Israel to recognize the Armenian genocide, surprised his longtime partners in the struggle when he informed them that he will not renew his signature on a petition calling on Israel to take that step. He did so, he explained, so as not to risk any chance of rehabilitating the country’s relationship with Turkey. Rivlin believes that every effort must be made to breathe fresh life into that relationship, since it is vital to the nation’s security.

A few months ago, we published here that Prime Minister Benjamin Netanyahu insinuated that he would use his influence in Washington to get Congress to recognize Turkey’s responsibility for the Armenian genocide, if Turkish officials continue their unrestrained attacks on Israel. Nevertheless, Jerusalem officially continues to avoid taking a clear position on the issue. A senior Foreign Ministry official told Al-Monitor on condition of anonymity that following internal deliberations, the ministry recommended taking a more empathic approach on the Armenian demand to recognize the genocide. This is not a Turkish matter, the senior claimed, but a moral issue.

The Foreign Ministry's spokesman, Emmanuel Nahshon, told Al-Monitor, "Israel's position has not changed. We are sensitive and attentive to the horrific tragedy the Armenian people suffered during World War I, and express our empathy and solidarity. The main efforts by the international community should be targeted at preventing humanitarian tragedies in the future."

April 24 marks the 100-year anniversary of the day that Talaat Pasha, interior minister of the Ottoman Empire, gave the order to begin the expulsion of Armenians from Istanbul, thereby signaling the start of the "Great Crime," or as the pope called it, "the first genocide of the 20th century." Representatives from around the world have been invited to attend a memorial ceremony to take place in the Armenian capital of Yerevan on that day. Jerusalem has received an invitation, too, though following deliberations, the Foreign Ministry decided to make do with a formal parliamentary delegation, with Knesset members Nachman Shai from the Zionist Camp and Anat Berko from the Likud Party. This indeed constitutes a gesture of empathy that is more significant than any past gesture by Israel. Nevertheless, this gesture is still much less than what the Armenians expect of Israel.

In what seems like the perfect spin to distract international attention from the event, President Erdogan will be holding a parallel event on that very day in Gallipoli to mark the bloody battle over control of the Dardanelles Strait. It will be recalled that the Allies lost to the Ottomans, who were fighting alongside the Germans. Dozens of world leaders have been invited to attend the ceremony and many have confirmed that they will be coming. Israel did not receive an invitation.