Why is Israel still silent on Armenian genocide?

Israel has not joined the EU Parliament and the pope in officially recognizing the Armenian genocide, partly because of its strategic alliance with Azerbaijan against Iran. 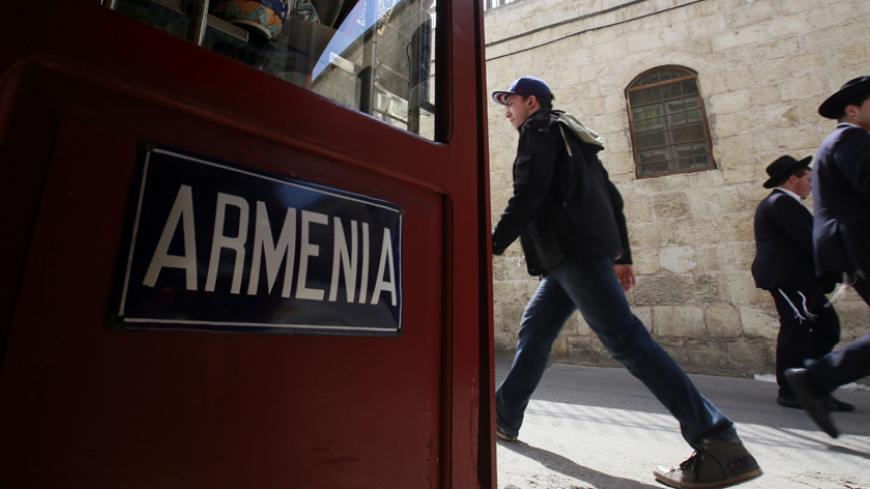 For years, close ties between Israel and Turkey were understood to be the reason Jerusalem has avoided the repeated requests of Armenians for the international community to recognize the genocide their community suffered at the hands of the Ottoman Turks during World War I. Not only has Israel refused to recognize that the massacre was premeditated and planned by the Ottoman government in Istanbul, it has also exerted its influence in Washington to prevent the United States from recognizing the genocide. This alone was a good enough reason for the various Turkish governments to maintain close ties with Israel. Ankara believed that Israel had almost mystical powers of influence over the White House and Capitol Hill.

Diplomatic relations between Israel and Turkey have been foundering for over half a decade. During most of that time, there has been no Turkish ambassador to Israel, while the Israeli ambassador to Turkey was expelled from Ankara in disgrace. Pro-Israel lobbyists no longer meet with the Turkish ambassador in Washington, and the Israel Defense Forces have found apt and even successful alternatives to cooperation with the Turkish military, at least as far as Israel is concerned.

This year, Armenians are marking the centennial of the genocide. Given the deterioration of its relationship with Turkey, this occasion would seem to provide Israel with a golden opportunity to respond to the moral claim that it recognize the Armenian genocide, just as Pope Francis recently did, followed by the European Parliament. In fact, dozens of prominent Israeli artists and academics recently signed a petition calling on the Israeli government and Knesset to recognize the Armenian genocide.

Nevertheless, officially, Israel continues to squirm. The Foreign Ministry recommends showing greater empathy to the Armenian issue, and this will be the first year that Israel will send an official delegation to participate in the memorial ceremony to take place in Yerevan. It will, however, be a low-ranking delegation, made up of Knesset members. Foreign Ministry spokesman Emmanuel Nahshon presented Israel’s official position to Al-Monitor, saying: “Israel’s position has not changed. We are sensitive and attentive to the terrible tragedy of the Armenian people during the First World War, and express our empathy and solidarity. Most of the international community’s efforts must be focused on preventing humanitarian tragedies in the future.”

A few senior Israeli officials dealing with the issue spoke to Al-Monitor about it on condition of anonymity. They emphasized that this doesn’t just involve susceptibility toward Turkish sensitivities, but also sensitivity that Israel wants to show toward Azerbaijan, which is a neighbor of both Turkey and Armenia. Since the Soviet Union's collapse, the borders in the Caucasus region have been redefined. One consequence is a continuing state of war between Azerbaijan and Armenia. One of the pillars of Azerbaijan’s new national narrative is the “Khojaly massacre,” which refers to a battle in the village of Khojaly, located in the disputed Armenian enclave of Nagorno-Karabakh, on Feb. 26, 1992. According to the Azeri narrative, Armenian forces killed 600 Azeri civilians there, including 169 women and children.

In this instance, the Armenians deny responsibility for the massacre of civilians, just as they do for a long list of atrocities that the Azeris have blamed on them since WWI. Given this relationship, it's no wonder that the Azeris describe Armenian claims of genocide as fabricated. Last week’s decision by the European Parliament to use the term “Armenian genocide” was described by a spokesman for the Azeri Foreign Ministry as “an attempt to falsify the history [and] its interpretation for political purposes” stemming from the parliament’s succumbing to Armenian pressure.

Gallia Lindenstrauss of Israel’s Institute for National Security Studies says that Azerbaijan is the Muslim country with which Israel currently has the closest ties. Trade between Israel and Azerbaijan is estimated at over $5 billion. Israel imports some 40% of its oil from there, and exports mainly weapons and sophisticated defense systems to it. In 2012, when talk of an Israel strike against Iran was at its peak, Foreign Policy quoted a senior US official as saying (apparently with considerable hyperbole), “The Israelis have bought an airfield … and the airfield is called Azerbaijan.”

About six months ago, Defense Minister Moshe Ya’alon paid his first public visit to Azerbaijan. Foreign Minister Avigdor Liberman has visited Baku, the capital, on several occasions. While there, both of them heard from their hosts that Azerbaijan, like the Israeli government, considers Iran’s nuclear capacity to be an existential threat.

Coming back to the official position presented by the Israeli Foreign Ministry spokesman, it would seem that the call to the international community “to prevent humanitarian tragedies in the future” might not refer only to the incidents of mass murder committed daily by the Islamic State against anyone who is not one of them — Yazidis, Christians or Alawites. It is mainly directed against Iran’s “explicit intent of obliterating the Jewish state,” as Netanyahu reiterated April 16 at Yad Vashem during a memorial service for the victims of the Holocaust. Herein lies the real reason for Israel’s policy concerning whether it will recognize the Armenia genocide. The reason isn’t Turkey; it’s Iran.