In Turkey's battle of the G-words, Gallipoli wins

The damage of the 1915 centennial is already done to Turkey’s international standing and only time may heal it. 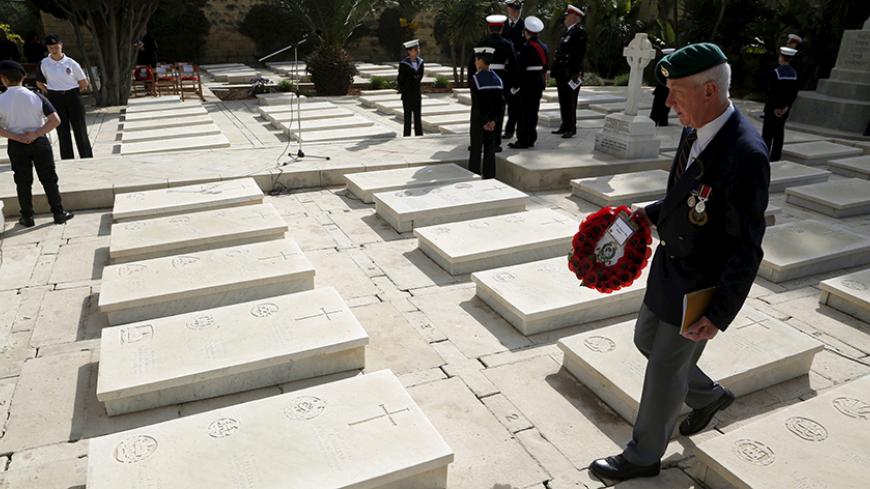 A military veteran walks among gravestones at the Pieta Military Cemetery before a service to mark the 100th anniversary of ANZAC (Australian and New Zealand Army Corps) landings at Galllipoli, in Pieta, Malta, April 25, 2015. - REUTERS/Darrin Zammit Lupi

At first sight it may seem a bit childish, but that is how the most serious and even incendiary political issues are handled in today’s Turkish diplomacy. President Recep Tayyip Erdogan, comparing the attendance in terms of arithmetic between the centennial of the Armenian genocide in Yerevan and the centennial ceremonies of the Gallipoli campaign in the city of Canakkale (Dardanelles), said, “Thank God 20 heads of state came to ours, while two went to theirs.”

The calculation needs a slight correction: The number of heads of states at Yerevan was four, with President Vladimir Putin of Russia, President Francois Hollande of France and the presidents of Serbia and Cyprus, while the number who attended the Canakkale-Gallipoli event hosted by Erdogan was around 17.

The participants, in Erdogan's words, at “our event,” apart from Prince Charles of the United Kingdom and the Australian and New Zealand prime ministers whose countries see Dardanelles-Gallipoli 1915 as the foundation stone of their nation-building, were the heads of state of Ireland, Macedonia, Montenegro, Bosnia-Herzegovina, Albania, Pakistan, Azerbaijan, Turkmenistan, Iraq, Qatar, Djibouti, Somalia, Mali, Niger, South Sudan and Senegal.

If any outcome of politics and successful diplomacy can be measured by such numbers, Turkey — even if it is not 20 against 2 but 17 against 4 — has won a stunning political victory in terms of the competition of the centennials. One could say that in the contest of the “G-words,” Gallipoli won over the Genocide.

However, if a rational account is made of what Turkey went through last week, it will reveal a heavy toll in terms of the diplomatic damage sustained.

Following Pope Francis' sermon when he pronounced the “G-Word,” and the Austrian parliament that adopted a resolution recognizing the 1915 events as genocide, Turkey angrily recalled its ambassadors from the Vatican and Vienna. Its retort to the resolution of the European Parliament on the "G-word" was even more ill-tempered, depicting the body as “representing nothing.”

Yet, as the symbolic date of April 24 approached, there were new additions to the recognition of 1915 as Armenian genocide. German President Joachim Gauck was very blunt. He spoke of a “genocidal dynamic to which the Armenian people fell victim.” The president went on to use the word genocide directly in a passage referring to the possible complicity of Germany, a World War I ally of the Ottoman Empire.

"In this case, we Germans collectively still have to come to terms with the past, namely when it comes to shared responsibility and perhaps even complicity in the genocide of the Armenians," he said. This was the first time the complicity of Germany in the Armenian genocide matter was recognized by a German statesman.

In referring directly to genocide, Gauck went further than a German coalition statement. The Bundestag used a more indirect formulation, denoting the Armenian deaths as exemplifying "the mass extermination, ethnic cleansing, deportations and, yes, the genocides during the 20th century."

Thus, it can safely be said that the most influential country of Europe is on board when it comes to the “G-word” issue.

Turkish authorities shuddered at the unexpected stance of Putin, who described 1915 “as one of the most appalling tragedies in the history of humankind” and said, “The events of 1915 shocked the entire world and were perceived in Russia as its own calamity.”

Putin, attending the solemn commemoration in Yerevan with Hollande and others, made the statement: “Today we mourn with the Armenian people. Remembrance events will take place in hundreds of Russian cities.”

For his part, Hollande, using the word genocide, said, “We are also aware that it is with the disappearance of 1.5 million Armenians 100 years ago that the word genocide was invented,” alluding to Raphael Lemkin, a Polish Jewish intellectual who coined the term in 1944.

Among the six world powers involved in the Iran nuclear talks, only China and the United States did not use the “G-word.” Yet, President Barack's Obama’s statement this time was more strongly worded than ever.

In his statement that referred to “Armenian Remembrance Day,” he said: “This year we mark the centennial of the Meds Yeghern, the first mass atrocity of the 20th century. Beginning in 1915, the Armenian people of the Ottoman Empire were deported, massacred and marched to their deaths. Their culture and heritage in their ancient homeland were erased. Amid horrific violence that saw suffering on all sides, one and a half million Armenians perished. As the horrors of 1915 unfolded, US Ambassador Henry Morgenthau, Sr. sounded the alarm inside the US government and confronted Ottoman leaders. Because of efforts like his, the truth of the Meds Yeghern emerged and came to influence the later work of human rights champions like Raphael Lemkin, who helped bring about the first United Nations human rights treaty.”

Obama concluded: “I have consistently stated my own view of what occurred in 1915, and my view has not changed. A full, frank and just acknowledgement of the facts is in all our interests. Peoples and nations grow stronger, and build a foundation for a more just and tolerant future, by acknowledging and reckoning with painful elements of the past. We welcome the expression of views by Pope Francis, Turkish and Armenian historians, and the many others who have sought to shed light on this dark chapter of history.”

With such references to Morgenthau, Lemkin and Francis and carefully selected strong wording, Obama's statement could be interpreted as “saying genocide without pronouncing the G-word.”

The Turkish Foreign Ministry had to work hard all day April 23 to craft responses. It issued four successive communiques. The first one, No. 129, rejected Putin’s usage of the term genocide and referred to mass killings committed by Russia in the Caucasus, Central Asia and Eastern Europe. Communique 129 was issued at 07:03 p.m., followed by Communique 130, issued at 10:41 p.m., which reacted strongly to Gauck, saying, “The Turkish people will never forget the German president’s expressions and will never forgive him.” Four minutes later, at 10:45 p.m., Communique 131 followed with more carefully selected words and criticized Obama as being “selective and not impartial.” An hour later, at 11:42 p.m., Communique 133 was issued, accusing both Hollande and Prime Minister Manuel Valls of France of “distorting” (historical) facts.

The Turkish Foreign Ministry continued its communique production over the weekend with Communique 134, criticizing the Bulgarian parliament’s (a neighboring EU member) recognition of 1915 as genocide. It described Bulgaria’s stand as “not friendly.”

Nevertheless, Turkey seemed reluctant to recall its ambassadors from Moscow, Berlin, Washington, Paris and Sofia. The question, inevitably asked, was: Why then, were the ambassadors in the Vatican and Vienna recalled?

So, assessing the diplomatic and political accounts, did he win? After all, 17 heads of state turned up in Dardanelles while only four attended the ceremonies in Yerevan.

If you add up the decisions of various parliaments, statements of presidents (mainly of the Western world) and the consequent diplomatic disarray inflicted upon Turkey, the presence of dignitaries from Prince Charles to the presidents of Mali, Niger, South Sudan and Djibouti, etc., does not adequately fill the impact of the “G-word” in the statements and attitudes of the six world powers.

Power and realpolitik are the parameters that determine how the international system functions.

The damage of the 1915 centennial has already been done to Turkey’s international standing. Only time may heal it.