For Turks, it's unimportant what the pope and European Parliament say; what's important is what Barack Obama says. 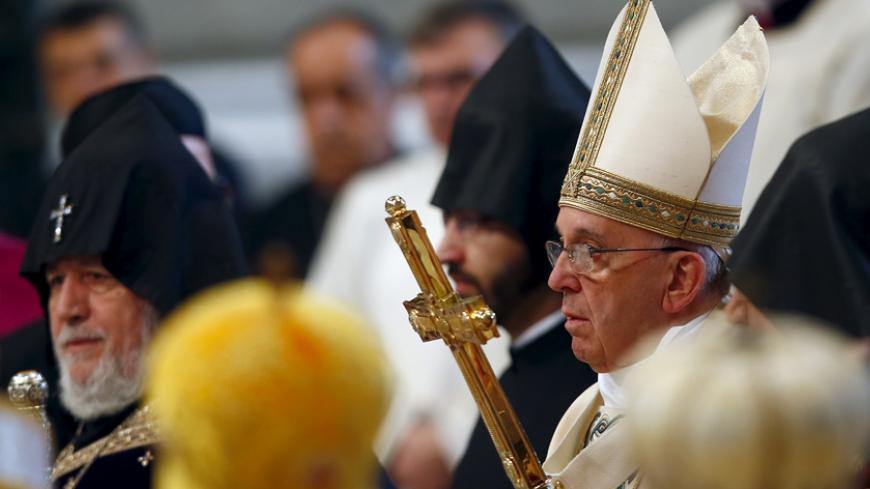 Pope Francis arrives to celebrate a Mass on the 100th anniversary of the Armenian mass killings, St. Peter's Basilica at the Vatican, April 12, 2015. - REUTERS/Tony Gentile

Pope Francis’ sermon at St. Peter's Basilica, where he spoke of the 1915 events that took the lives of hundreds of thousands of Ottoman Armenians, was expected to be the precursor for Western governments. The speculation (and the Turkish government's concern) is focused on the United States. April 24 is the centenary and Francis seemed to allow for many to follow. But every year on the anniversary of the alleged Armenian genocide, US President Barack Obama has refrained from uttering “the G-word.” He has preferred the Armenian words “Metz Yeghern” (Great Calamity) that were used by Armenians before the UN Genocide Convention of 1948.

The European Parliament may have to come to the rescue of Obama, seemingly squeezed between a moral obligation and the imperatives of foreign policy driven by national interest and the commitments of an international coalition leader in a volatile region of the Middle East. After all, Turkey is a NATO ally and despite its divergence on crucial issues with Washington, it is much too valuable an asset to alienate.

A nervous Turkish leadership already extremely hostile to the Armenian genocide debate may not be on Obama’s agenda for confrontation. He is too occupied with keeping the Sunni discontent with the Iranian nuclear deal in line, led by Saudi Arabia. He may see no benefit in opening another regional front with NATO ally Turkey and not repeating the “Metz Yeghern” this year, and following the pope's lead.

It is exactly in this sense that the European Parliament’s resolution invited, and therefore infuriated, Turkey to recognize the 1915 Armenian calamity as genocide, and may have provided an out for Obama to avoid saying the “G-word.”

On the day the European Union’s legislative body adopted the resolution that also called on member countries to recognize April 24, 1915, as a “genocide,” I was at an international conference at a EU member country. I was discussing the troubled relations of the new Greek government with the EU with a Greek friend who chairs an influential think tank. We shifted the conversation to the European Parliament’s resolution. He was sure that Obama would not use the “G-word” in his April 24 statement. When I asked how he could be so confident, he burst out in laughter and responded, “Because the European Parliament used the ‘G-word!'”

Yet, the Turkish government does not want to take any chances in its quest to deter Obama. The reactions to the European Parliament’s resolution is a natural, expected and understandable reflection of Turkish nationalism. It's directed mainly to deter the president of the United States following the line drawn by the pontiff.

The uproar of Turkey’s leaders to the European Parliament’s resolution that followed Francis’ statement is a two-pronged political ploy. One is directed internally for domestic policy to impress the voters in an election campaign. President Recep Tayyip Erdogan, Prime Minister Ahmet Davutoglu and the ruling Justice and Development Party are keen to mobilize the public through a nationalistic discourse that could be a boost for their dwindling election chances. The other is related to Turkish foreign policy vis-a-vis the West.

Erdogan, on the eve of his state visit to Kazakhstan, declared the European Parliament resolution as “null and void.”

The Turkish Foreign Ministry promptly issued a statement with insulting language employed against the European Parliament. The wording was appalling for all those who are familiar with the finesse of diplomatic language.

In the last paragraph of the statement, the Turkish Foreign Ministry did not mind sounding ridiculous in calling on Europe “to reconcile with its past, recognizing the fact that it caused great pain to humankind by instigating World War I and II.”

The impulsive reactions of Turkish officials reached a point of absurdity in the words of an Erdogan confidant, former Deputy Prime Minister Emrullah Isler, who accused Armenians of committing a “premeditated genocide” against Muslims and Turks. He alleged that “the number of the innocent souls that Armenians murdered is 521,000. If there was really a genocide, it is committed by Armenians.” He claimed that Francis made his sermon under certain pressures and all such efforts lead to a dead end.

Such language appears to have influenced the tone of the European Parliament resolution. During the debate before the resolution was adopted, a Portuguese Christian Democrat, Paulo Rangel, criticized Erdogan and said, “You cannot address ... Pope Francis as if you are addressing ... a Mafia godfather.”

The Economist thinks the language adopted by the Turkish leaders and above all by Erdogan is counterproductive for Turkey’s relations with the West:

“Mr. Erdogan has taken on an angrier, more nationalistic, Islamist and autocratic tone. This is making it harder for him not just to get on with his neighbors but also to preserve Turkey’s pro-Western credentials as a bulwark of NATO and prospective member of the EU. That is why Turkish twitchiness over what happened in 1915 is so counterproductive.

“By treating the dispute as a matter of vital national interest, the Turkish government is falling into a nationalistic trap. Instead it should admit past sins. Like other European powers, including Britain, Germany and Russia, it has plenty to acknowledge. Turkey has in the past mistreated, deported or killed not only Armenians but also Assyrians, Greeks and Kurds. But it also has reasons for pride, for the Ottoman Empire was, for example, often more tolerant of its ethnic minorities, including Jews, than the rest of Europe was.”

Taking into consideration the importance of Turkey’s ties with the EU, particularly dealing with economy, it may seem hard to assess the vitriolic polemics directed at the EU institutions by the current Turkish leadership.

According to a recent survey, it is Europe that offers salvation for the worsening economic malaise that Turkey is experiencing. Given that exports to Middle Eastern, Russian and Ukrainian markets are declining because of security reasons, the European market is of utmost importance for Turkey.

Turks are not very anxious about whether or not the row over the Armenian genocide issue will jeopardize the prospects of Turkey’s relations with the EU because they believe it is already far down on the list and the Europeans do not wish to further damage relations with Turkey.

With such a realpolitik projection, Turkey's main emphasis by its venomous rhetoric against the EU is to deter the United States.

Turks feel they can afford to escalate the polemics with the EU, which may prove temporary. But losing the United States over the “G-word” could create irreversible damage.

Turkey’s leaders do not care much whether the facts support Francis or what the European Parliament or the EU resolves to do.

For Turks, Obama refraining from the use of the “G-word” is more vital than ever.