Turkey angered by pope's use of 'G-word’

Turkey also now worries that US President Barack Obama will follow Pope Francis and address the issue of the Armenian genocide 100 years ago. 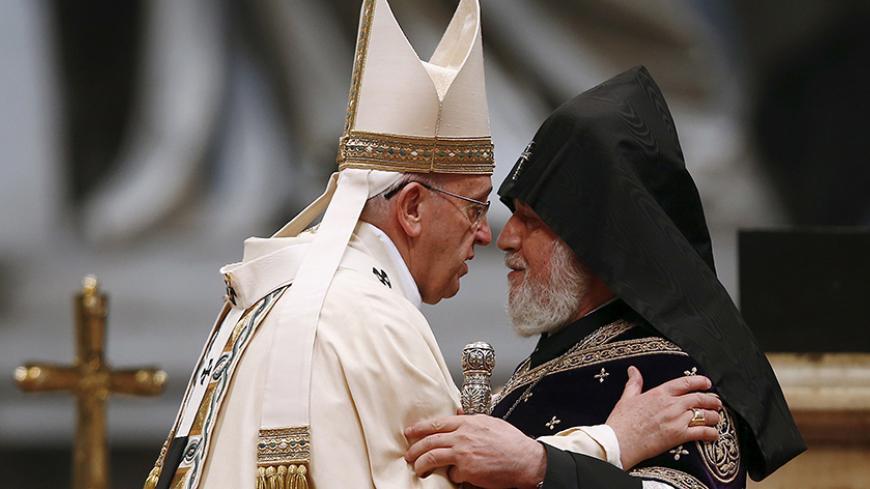 Pope Francis (L) embraces Catholicos of All Armenians Karekin II during a mass on the 100th anniversary of the Armenian mass killings, in St. Peter's Basilica at the Vatican, April 12, 2015. - REUTERS/Tony Gentile

Less than two weeks before the centennial of the Armenian genocide, the leader of the world's billion Catholics made remarks that shocked the Turkish government and gave a dramatic boost to those who believe genocide was committed in 1915.

Pope Francis offered the comments during his April 12 sermon at St. Peter’s Basilica, attended by Armenian dignitaries including Armenian President Serzh Sargsyan and Catholicos Karekin II, the highest religious authority of the Armenian Apostolic Church. “The first, which is widely considered the first genocide of the 20th century, struck your own Armenian people. Bishops and priests, religious women and men, the elderly and even defenseless children and infirm were murdered,” he said.

“The remaining two were perpetrated by Nazism and Stalinism,” the pontiff said. “And more recently there have been other mass killings, like those in Cambodia, Rwanda, Burundi and Bosnia.”

Francis also added that it is “necessary, and indeed a duty,” to remember the Armenians killed, “for whenever memory fades, it means that evil allows wounds to fester. Concealing or denying evil is like allowing a wound to keep bleeding without bandaging it!”

Sargsyan praised Francis in an interview with The Associated Press for “calling things by their names.”

“The words of the leader of a church with 1 billion followers cannot but have a strong impact,” Sargsyan added.

Francis’ statement on the recognition of 1915 as a “genocide” is a political and diplomatic development of great importance. Its importance and consequences may extend beyond the relations between Turkey and Vatican, already scarred as Turkey immediately summoned the papal ambassador to Ankara to express its displeasure and later recalled its ambassador from the Vatican, ostensibly for consultations.

Turkish Foreign Minister Mevlut Cavusoglu promptly responded, in a tweet: "The pope’s statement, which is far from legal and historical reality, cannot be accepted.” He added, “Religious authorities are not the places to incite resentment and hatred with baseless allegations.”

Francis had visited Turkish President Recep Tayyip Erdogan on Nov. 28 in Ankara, when the pontiff was in Turkey to meet Greek Orthodox Patriarch Bartholomew on Nov. 30 in Istanbul — a meeting that brought the Catholic and Orthodox churches closer together.

The pope was among the first visitors to Erdogan's “new palace” in Ankara and his visit had been interpreted by Erdogan's supporters as further international “confirmation and legitimization of Erdogan's new status.” Therefore, his sermon on the 1915 events where he pronounced the “G-word” constitutes a strong blow on the foreign policy credentials of Erdogan's rule.

Renowned US political scientist and historian Walter Russell Mead wrote an assessment under the title "Does Francis Read Huntington?" where he said, “By the standards of Vatican diplomacy, this was an explosion. … For President Erdogan, an attack on Turkey’s ‘honor’ by the world’s most prominent Christian leader is political catnip; it allows him to conflate the causes of Turkish nationalism and Islamism as he faces the fallout of an economy in trouble. In the longer run, Turkey’s ability to come to grips with this issue remains a key indicator of where the country is headed.”

He, rightly, observed that Francis was not only talking to Turkey, as genocide is a topical subject in today’s Middle East and the pope was speaking with the awareness of the spread of horrific violence against Christians and other minorities.

Such a phenomenon brings to mind the revival of Samuel P. Huntington’s hypothesis on the “clash of civilizations.” Turkey’s leaders, including Prime Minister Ahmet Davutoglu, are keen to talk on behalf of “the Muslims of the world” and in the midst of a crucial election campaign that the political survival of each seems jeopardized, Francis’ statement on the Armenian genocide will be manipulated for ever-increasing Turkish nationalist discourse.

Erdogan and Davutoglu alike are already whipping up Turkish nationalist sentiment against the pro-Kurdish People's Democracy Party (HDP), which is contesting the power of the ruling Justice and Development Party (AKP). According to polls, the pope’s sermon on the Armenian genocide will serve Erdogan and Davutoglu for both purposes — as fuel for their Turkish nationalist discourse during the election campaign and fuel in presenting themselves as main spokesmen for Muslims all over the world.

Yet, Turkey’s main concern about Francis’ characterization of 1915 as “genocide” is the impact that it may have on US President Barack Obama. He has avoided the “G-word” that he used to pronounce until he became president. In office, he has preferred to call it “Medz Yeghern,” which in the Armenian language means “Great Calamity.” Although the term is not particularly palatable for Turkish officials, as long as the “G-word” is not pronounced by the world’s strongest leaders, they could live with it.

Francis may have set a precedent for Obama. If Obama does not use the word, it would be embarrassing for him not to do so, because until now both had found an exit: Francis had cited Pope John Paul II and Obama had cited President George W. Bush.

Now, that cycle has been broken by Francis. If Obama follows suit, the direction of the developments from the Middle East to the Black Sea and Balkans may not be the same.

Francis' pronunciation of the “G-word” went the extra mile — for Turkey, for the United States and for the Muslim and Christian worlds.