Pope Francis' visit to Palestine was full of pleasant surprises for the Palestinians. 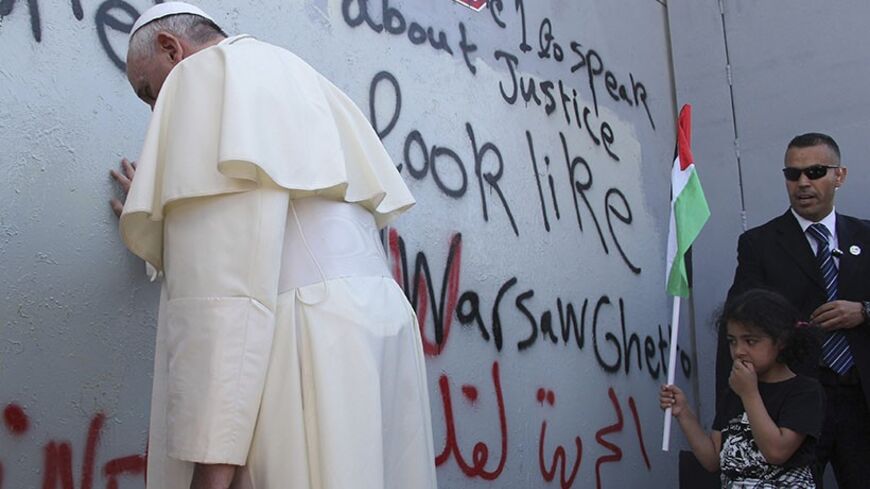 Pope Francis touches the wall that divides Israel from the West Bank in Bethlehem, May 25, 2014. - REUTERS/Mheisen Amareen

It is normal for popes to be loved and followed by Catholics. But the visit of Pope Francis to Jordan and Palestine has shown a Christian leader who is extremely popular in two countries where the Christian populations are quite small. Pope Francis’ visit to the Holy Land began in Jordan where a mass was attended by 30,000 believers, including many coming from nearby Lebanon, followed by a visit in the company of King Abdullah to the baptismal site of Bethany beyond the Jordan.

Jordan was instrumental in helping the pontiff avoid entering Palestine through the controversial Israeli-controlled Jordan River bridge. Taking advantage of the peace treaty with Israel, Jordanians facilitated the wish of the Vatican for the pope and his entourage not to cross any Israeli military checkpoints, by providing military helicopters for transportation to Bethlehem.

The official welcome by Palestinian President Mahmoud Abbas of Pope Francis paled in importance to what would happen next as the pope traveled through the streets of Bethlehem and drove by the Aida refugee camp, which is adjacent to the 10-meter (33-foot) wall that Israel has erected, encircling Rachel’s Tomb deep inside Palestinian areas. For days before the visit, Palestinian youth and Israeli soldiers have been in constant battle. Two days prior to the visit, Israeli troops entered the Palestinian area and whitewashed the entire wall to prevent the pope from seeing the graffiti that has been filling it up. The night before the arrival of the pope, however, youth spray-painted new slogans, this time in English with the hope that as he drove by, the pope would learn about the aspirations of Palestinians to live in freedom.

Pope Francis not only read the graffiti, but ordered his driver to stop and, in an unplanned move, walked up to the wall, touched it and laid his head on it for a moment of prayer. The image of Pope Francis’ head on the wall soon went viral on social media and no doubt adorned front pages of newspapers around the world. Some social media sites compared this image to that of Pope John Paul II's prayer at the Jewish Western Wall in Jerusalem.

Not far from where the pope stopped was a yet untouched graffiti by the world famous British artist Banksy of a role reversal, a Palestinian girl frisking an Israeli soldier.

If the pope’s unscheduled stop at the wall provided the most dramatic image of the day, the pontiff’s speech at Manger Square in Bethlehem provided the media with a tangible news item. Standing in front of a mural of the nativity scene and a baby Jesus wrapped in a Palestinian keffiyeh, the pope called on all believers to pray for peace and justice, then turned to the politicians. Addressing Abbas, who attended along with Prime Minister Rami Hamdallah, the mayor of Bethlehem Vera Baboon and chief negotiator Saeb Erekat, the pope made a special plea. “I wish to invite you, President Mahmoud Abbas, together with [Israeli] President Shimon Peres, to join me in heartfelt prayer to God for the gift of peace. I offer my home in the Vatican as a place for this encounter of prayer," he said.

While the call was made to two individuals with similar titles, Peres is not an executive president. Peres, whose second and final term in office is about to expire, will be replaced by a new president to be chosen on June 10. Opting for Peres rather than Prime Minister Benjamin Netanyahu reflects the expectation that the pope did not want his plea to be rejected by the Israelis. Palestinian sources told Al-Monitor that the offer was discussed beforehand with Abbas and most likely with Peres. Israeli peace activist Gershon Baskin had written an article a week earlier saying that he tried as late as April 2014 to organize a direct meeting between Abbas and Netanyahu, but that the latter refused.

Both Abbas and Peres agreed to travel to Rome. Erekat said that Abbas was willing to go to the Vatican on June 6.

Following a warm welcome in Manger Square by thousands of Palestinian Christians, which included some who were allowed to travel from the Gaza Strip and many from the Galilee, the pope was invited to have lunch with five families each representing a different region. Those in attendance say that the story of a Palestinian woman from Beit Jala, whose land is threatened with confiscation by the Israelis, moved the pontiff.

The pope’s final visit before leaving was with children of Palestinian refugees held at the largest Bethlehem refugee camp, Dheisheh. The children spoke in Arabic and Italian, sang and held signs in many languages reflecting their aspirations and those of all Palestinians. They gave the pope a replica of a refugee ration card and a key representing the right of Palestinians to return. The pope listened, smiled and shook hands with every one of the Palestinian children to the surprise of many. Afterward, Abbas and Hamdallah, who watched the visit live on TV, made an unexpected visit to the same refugee camp center to thank the children for such a warm and genuine plea for peace.

After 20 hours in Jordan and Palestine, the pope left on the same Jordanian military helicopter that brought him to Bethlehem, this time going to Ben Gurion Airport in Tel Aviv, where he was given an official Israeli welcome.

Palestinians and Jordanians were ecstatic with the visit. It had exceeded their expectations and no incidents took place. Pope Francis' pilgrimage, like that of the three previous pontiffs, will stay in the memory of the local community for years. His words, actions and smiles, his homily about the rights of all children, his angry moment about arms traders and the war in Syria, and his plea for peace and justice in Palestine will continue to be talked about. The dwindling Arab Christian community in the countries of the Levant, which is far from good news, had for these few hours a smile on their faces as they felt empowered and invigorated by the pope's visit. One Jordanian Christian carried away with the emotion of Pope Francis’ visit told Al-Monitor that every Arab Christian living abroad must return. This no doubt was the hope of the visiting pontiff and the church leaders who helped organize his visit to the Holy Land.