Ankara is furious over a commemorative stamp design featuring a map of Iraqi Kurdistan that includes chunks of Turkey’s Kurdish-dominated southeast provinces. 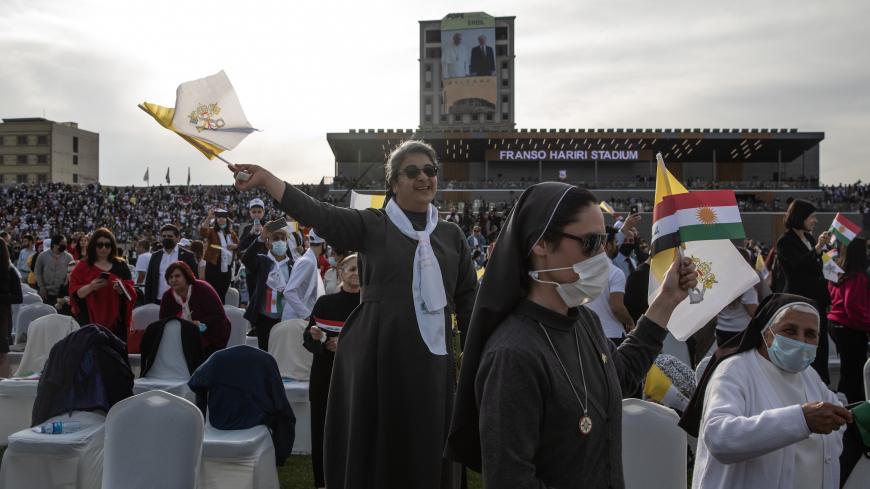 A nun waves a flag as Pope Francis arrives to conduct a mass at the Franso Hariri Stadium on March 7, 2021, in Erbil, Iraq. - Chris McGrath/Getty Images

Turkey lashed out at Iraq’s Kurdistan Regional Government (KRG) Wednesday over its plans to print a commemorative stamp to mark Pope Francis’ March 7 visit to Erbil, the last leg of his historic tour of Iraq.

Ankara went bananas because the stamp featured a map of Iraqi Kurdistan that included chunks of Turkey’s Kurdish-dominated southeast provinces with the pontiff’s profile partially covering it. “Certain presumptuous authorities in the KRG dared to abuse the [pope’s visit] to express their unrealistic aspirations against the territorial integrity of Iraq’s neighboring countries. KRG authorities are in the best position to remember the disappointing outcomes of such deceitful aims,” the Foreign Ministry said in a statement, demanding that KRG officials immediately rectify the “mistake.” 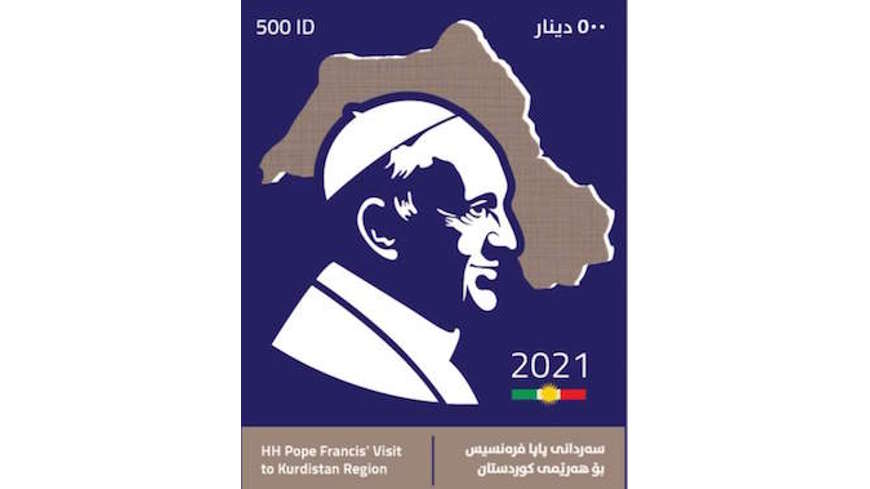 Ankara was referring to the Iraqi Kurds’ 2017 referendum on independence, which drew fierce reactions from Baghdad, Turkey and Iran and led to the Kurds’ losing control of Kirkuk when Iraqi troops drove out their peshmerga forces from the oil-rich province.

Images of the stamp provoked a barrage of racist commentary on Turkish Twitter. “Those who dream of Kurdistan will end up in Kabristan,” read a top trending tweet. "Kabristan" means graveyard in Turkish.

Iraqi Kurdish officials briefing Al-Monitor said no decision had been reached yet as to which stamp among a number of competing entries would be chosen to commemorate Pope Francis’ visit. It clearly won’t be the one with the map because the KRG cannot risk further Turkish ire. Iraqi Kurdistan’s main source of income, oil, is exported through a pipeline running to loading terminals on Turkey’s southern Mediterranean shores. As the winter snows melt, likely further Turkish military incursions loom.

Ankara’s shrill reaction is rooted in the Kurds’ ever elusive dreams of establishing an independent Kurdish state carved out of large chunks of Turkey, Iraq, Iran and Syria. The pope’s visit to Erbil was the first ever by a Catholic pope to the Iraqi Kurdistan Region, where he held mass in a packed stadium and conferred with Kurdish leaders whom he thanked for their support for Christians and fight against the Islamic State. The trip has apparently added a further layer of conspiracy-laced paranoia about purported Western backing for Kurdish independence. “I thank the dear Kurdish people for their warm welcome,” the Pontifex said in a March 10 tweet.

“The pope superimposed over a map of Kurdistan? This has the makings of the perfect conspiracy. I am just surprised it’s not an even bigger deal,” observed Nicholas Danforth, a senior research fellow at the Hellenic Foundation for European and Foreign Policy who also blogs about historical maps.

Maps have been a sore point in Turkey ever since the 1920 Treaty of Sevres, which saw the World War I allies cede large bits of the Ottoman Empire to France, Britain, Greece and Italy and foresaw the establishment of an independent Armenia and eventually Kurdistan. The Treaty of Lausanne was signed in 1923 after modern Turkey’s founder Kemal Ataturk liberated Anatolia from allied occupation, but Turkish jitters about foreign plots to dismember present-day Turkey have not subsided. It hasn’t helped that the outlawed Kurdistan Workers Party (PKK), which has been fighting Turkey since 1984 initially for Kurdish independence and now some form of autonomy, is based in Iraqi Kurdistan or that its Syrian arm is partnered with the United States.

However, “Given Ankara’s sensitivity to this, Ankara should also understand why the increasing prominence of irredentist maps in the Turkish media has caused alarm and ill will among Turkey’s neighbors,” Danforth said.

Metin Kulunk, a senior AKP official, caused just this kind of stir when he shared a map of Turkey on Twitter that included large portions of Bulgaria, Greece, Syria, Iraq, Armenia, Georgia and Azerbaijan in its borders.

Turkey has historical claims on Mosul that are periodically revived. It's threatening to annex northern Cyprus and seize Kastellorizo, a Greek island in the Mediterranean Sea. It has several thousand troops based across Iraqi Kurdistan to fight the PKK and routinely rains bombs on the region, causing civilian deaths. And while Ankara grumbles about aspirational Kurdish stamps, its military presence in large areas of northern Syria has all the trappings of a colonial occupation with newly built post offices and schools where Turkish is taught and giant portraits of Erdogan hang.