Though Iraqi Kurdish leader Massoud Barzani’s visit to Ankara was widely taken as a bid for support from Turkey in his quest for independence, the visit was not a sign of Turkey’s support for an independent Iraqi Kurdistan. 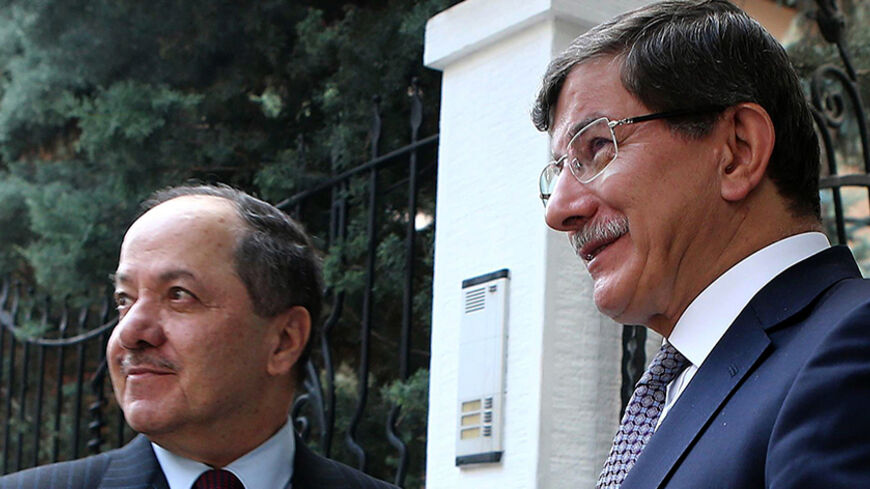 The surprise talks on July 14 between Turkey’s Prime Minister Recep Tayyip Erdogan and his guest, Kurdistan Regional Government (KRG) President Massoud Barzani, represented one party entangled in electoral politics and another squeezed between his aspirations for independence — a cherished aim for the Kurds dispersed mainly in four countries of the Middle East — and realpolitik constraints.

According to news leaked from quarters close to Erdogan, “The talks with Barzani covered the expectations for independence in northern Iraq, the political process in the country, northern Iraq and Kirkuk oil and consulate personnel in the hands of the Islamic State (IS, formerly the Islamic State of Iraq and al-Sham) and the solution process in Turkey. Barzani was given the message to avoid incidents that could inflame ethnic and sectarian strife in Iraq and that the political efforts to preserve the integrity of the country should be supported.”

Barzani’s unexpected visit to Ankara was widely seen as as Barzani’s search for support from Turkey in his quest for independence. When one takes note of the increasing comments in the Western media to the effect of Erdogan being about to midwife a new state born in Iraq, it was inevitable that the Barzani visit be interpreted as focusing on Turkey’s support for an independent Iraqi Kurdistan.

But this interpretation is misleading. Turkey has carefully avoided saying anything publicly against independence for the Kurdistan Region that could offend Barzani, who has become essentially the sole ally of an increasingly isolated Turkey. This is not only a foreign policy issue. The solution process with the Turkish Kurds, an important factor in the upcoming presidential elections, made it imperative not to say anything that could upset them.

After Rouhani's recent visit to Ankara, comments by a senior Iranian official that Turkey and Iran share a “strategic horizon” about a Kurdistan state in the region attracted attention.

“US President Barack Obama is against the division of Iraq and the emergence of an independent Kurdish state," wrote Yavuz Baydar in Today's Zaman. Iranian Deputy Foreign Minister for African and Middle Eastern Affairs Hossein Amir Abdollahian claimed July 14 that the division of Iraq is an Israeli plan that Iran will never allow to happen. Abdollahian also said that Tehran and Ankara are on the same page strategically with regard to an independent Kurdish state in the region.

Of course, Barzani is well aware of all this. Although emboldened after the takeover of Mosul by IS and the full Kurdish control over Kirkuk, the KRG started voicing its dream of independence and Barzani has even claimed that Turkey will not block an independent state in the region. But he knows that this would never be a priority for Turkey. On the contrary, he is more aware than anyone else in the region about the Turkish establishment’s irritation with the Kurds' control over Kirkuk, which was long considered a “red line” not to be crossed.

As a matter of fact, Barzani has modified his convictions on the Turkish attitude toward Kurdish independence. “I do not expect to receive active assistance or opposition” from Turkey with regard to an independent Kurdish state, he told German newspaper Die Welt on July 14.

In a July 10 interview with Al-Monitor, Barzani said, “Kurdish politics are based on two courses of action. The first is working with the national forces to rebuild Iraq, and the second is exercising the right of self-determination if efforts to save Iraq fail.”

The nature of relations between Iraqi Kurdistan and Turkey was strikingly laid out in the words in a Financial Times news analysis datelined Erbil: “Kurdistan could find that its only outlet is its powerful foe-turned-business partner in the north, Turkey."

“We’re surrounded by sharks,” said one government official who asked not to be named. “Independence means tying ourselves to Turkey, the biggest shark in the neighborhood. Observers say the KRG’s independence rhetoric is in fact aimed at putting pressure on Baghdad for a deal allowing Kurds to control their oil exports as well as some disputed territory.”

The IS complication emerged at this juncture. The Turkish hostages taken from the consulate in Mosul and IS became a priority in the Erdogan-Barzani talks. When the Kurdistan Workers Party (PKK) suspects a Turkey-IS connection and when the Kurdish movement was issuing the challenge of “us or (IS0,” it was inevitable that the IS issue be discussed by Erdogan and Barzani.

Reason dictates that Erdogan will ally himself firmly with his close friend Barzani against IS. However, concerning Mesopotamia and the Levant, reason may have to be suspended for a while. IS had enjoyed covert Turkish support before in its dealings with the Syrian Kurds to prevent the Democratic Union Party, a PKK affiliate, from dominating the Kurdish-populated areas of northern Syria adjacent to Turkey’s frontier.

On July 12, the Kurdistan Communities Union (KCK), the umbrella group of the PKK and its affiliates, issued a strong warning to Erdogan's Justice and Development Party (AKP) government. Firat News Agency reported that it read, “The AKP must abandon its 'three monkeys' policies. The settlement process in [Turkey's predominantly Kurdish] north and support of IS in Rojava [northern Syria’s Kurdish area] cannot go together. The AKP should either support IS or respect the spirit of the peace process. Otherwise, the spillover of the revolution from Rojava to the north or vice versa will be inevitable. No force will be able to stop this.”

The KCK and PKK resorted to reasoning that could best be treated as a conspiracy theory that supports a direct connection between the Erdogan government and IS. According to Firat, the warning added, “IS gangs are crossing the Iraq-Turkey borders and attacking our people. There is a sinister and dangerous plan in the works. IS has made a deal with the AKP state. Seizing Kobani (Ayn al-Arab) and wiping out the Rojava revolution is the joint strategy of both sides. The basis of such an accord is the release of Turkish consulate personnel. … The attack against the Rojava revolution and Kobani is organized by the AKP state.”

IS attacks have escalated in northern Syria, targeting the Syrian border town of Kobani, the seat of one of the three Kurdish “cantons” where Kurds have exercised self-rule for some time. The defense of Kobani, a town which lies across the border from Turkey’s Suruc district in Urfa province, has become the focal point of Turkey’s Kurdish political movement.

In addition to ideological considerations in a region engulfedin sectarian conflict, Turkey’s hands are tied by IS. Ankara cannot be expected to enter into overt and effective cooperation with Barzani against it. To do so would truly work for the Kurdish independence that Turkey doesn’t want.

The real issue is about Syrian’s north. Those fighting there, IS and the Kurds, are opponents of Barzani but parties to Turkey’s solution process.

There are difficult choices for all the parties involved, and things have became even more complicated following Barzani’s visit to Ankara.