Is the KRG heading for bankruptcy?

Iraq’s Kurds warn that unless Washington rides to their financial rescue, they cannot sustain their fight against the Islamic State. 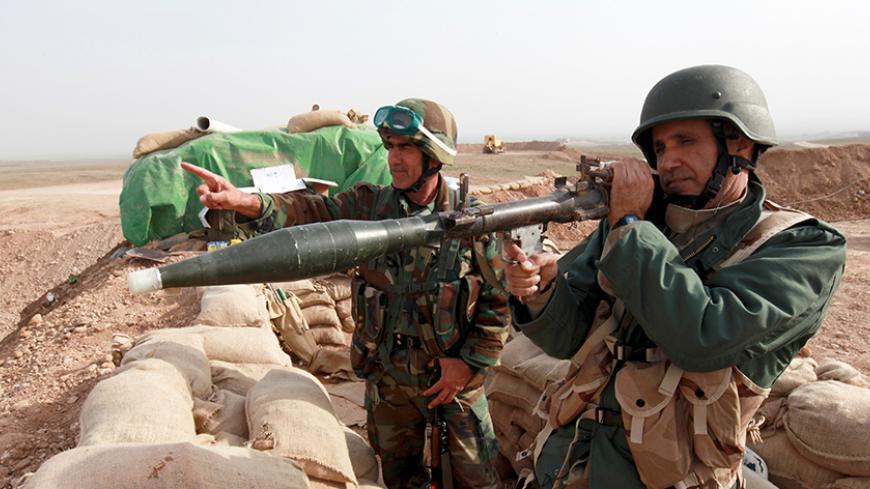 Kurdish peshmerga fighters take position with their weapons at the front line against the Islamic State on the outskirts of Mosul, Iraq, Jan. 26, 2015. - REUTERS/Azad Lashkari

When the Iraqi Kurds come to Washington, it is often to ask for guns to fight the Islamic State (IS). Now they are pleading for cash, warning that their campaign against the jihadis is threatened by an economic “tsunami” that has left their quasi-independent state teetering on the brink of collapse. “Is this only our fight or yours, too?” asked Fuad Hussein, chief of staff of Iraqi Kurdistan Regional Government (KRG) President Massoud Barzani, after briefing top US officials in Washington last week.

The Iraqi Kurdish peshmerga warriors and the Syrian Kurdish People’s Protection Units are critical allies in the fight against IS, wresting back huge chunks of territories including the town of Sinjar in Iraq and the Tishreen dam in Syria. But Hussein cautioned that IS remains “a big threat” and could “regroup at any time.” Unless the Kurds’ allies step in with financial aid, the Kurds' capacity to fend off the jihadists will wane, he said. “You cannot win the fight when you can’t survive economically,” Hussein told Al-Monitor in an interview.

That message was driven home in back-to-back meetings at the State Department, the White House, the National Security Council and also on Capitol Hill, where the Kurds met with Sens. John McCain and Dianne Feinstein, among others. “We haven’t been going around asking people to pull out their checkbooks,” said Bayan Sami Rahman, the Kurdistan Regional Government’s (KRG) representative in Washington. “But people don’t appreciate enough that this is an incessant fight,” she said in an interview with Al-Monitor. “Never mind the cost of running a war, our peshmerga don’t even have winter gear. The purpose of our mission here is to help our friends understand that this is not sustainable, that we need nothing less than a Marshall plan,” Rahman added.

The biggest cause for the meltdown is plunging oil prices. The KRG relies almost exclusively on oil revenues. Prices slumped below $30 per barrel last week and are set to weaken further with the easing of sanctions on major oil producer Iran. Iraq’s central government also depends mainly on its oil revenues to finance its budget, 17% of which is earmarked for the KRG. But the agreement has never been properly implemented with both sides blaming the other for not honoring their respective commitments. The crisis escalated when the Kurds began exporting their oil independently through a newly built pipeline running to Turkey’s Ceyhan oil terminal on the Mediterranean.

A fresh deal mediated by the United States was reached in December 2014, whereby the Kurds were supposed to sell 550,000 barrels per day of crude through Iraq’s state marketing firm SOMO in exchange for their budget share. But this also fell through.

Rather than giving the Kurds 17% of revenues, “Iraq was simply buying our oil and not even giving us a fair market price for it,” Rahman said. Meanwhile, Baghdad has effectively halted all budgetary payments to the Kurds since February 2014. The KRG has run up an estimated total debt of $18 billion since then.

The stalemate with Baghdad shows no signs of abating. In June, the Kurds resumed selling their oil independently via Turkey. But because of the mediocre quality of its crude and the legal risks customers face over Baghdad’s claims that the sales are illicit, the Kurds are forced to sell well below market prices.

“The result is that we haven’t been able to pay civil servants salaries, including those of the peshmerga, for the past five months,” Hussein said.

The Kurds’ wrangles with Baghdad and plummeting oil prices aren’t the only worry. Some 1.8 million refugees fleeing IS within Iraq and in Syria have added to the strain. “Countries like Jordan and Lebanon also have big refugee populations, but unlike us, they are not on the front line fighting IS,” Rahman noted.

The Kurds have always enjoyed a sympathetic audience in Washington and other Western capitals. Over the past two years, the United States has given $600 million in aid to the Iraqi government. “And much of that was spent in the KRG,” a senior US official, speaking on condition of strict anonymity, told Al-Monitor. At the same time, the United States is preparing to train and equip up to three new peshmerga brigades to fight IS. These were meant to be formed by new recruits to ensure they did not cleave to party loyalties as is often the case in Iraqi Kurdistan. But due to the extra financial burden that this would impose, the brigades are now to be drawn from existing peshmerga forces.

Many agree that cronyism, mismanagement and a lack of transparency have contributed to the current impasse. “There are a number of overdue reforms the Kurds need to carry out to improve their own situation,” the senior US official said. US government advisers are working with KRG Deputy Prime Minister Qubad Talabani for just such an overhaul.

The KRG has made some changes, slashing allowances of Cabinet ministers and senior government employees by some 50% and scrapping such perks as free electricity and rents for them. But these are a drop in the ocean, critics say: Energy subsidies need to be cut, the bloated public sector shrunk and thousands of “ghost” employees, notably among the peshmerga, weeded out.

"The government has only two options: either to reform or cease to function," opposition lawmaker Goran Azad told the Reuters news agency.

Corruption remains one of the biggest challenges. Patronage networks fed by the main political parties — Barzani’s Kurdistan Democratic Party and the ailing former Iraqi President Jalal Talabani’s Patriotic Union of Kurdistan — have spawned a class of nouveau riche whose ostentatious lifestyles breed resentment. The opaqueness of the KRG’s energy deals, particularly with Turkey, remain another bone of contention. It remains unclear how the proceeds of oil sales are allocated or even how much they are worth. Until recently, these were deposited in an escrow account with Turkey’s state-owned Halk Bank.

Most would conclude that the Kurds’ fiscal blues puts a big damper on their long-cherished dreams for statehood. If anything, it has reinforced the sense among ordinary Kurds that formal ties to Baghdad are more of a hindrance than anything else.

If the KRG were a sovereign state, it would be able to tap international donors such as the United Nations or the World Bank for funds or float its own bonds. "But we can't," Rahman said.

Barzani makes no secret of his desire to lead his people to statehood. He has raised the possibility of holding a popular referendum this year. Kurdish leaders acknowledge that their state can only be viable if at least one of the two regional heavyweights, Iran and Turkey, offers its blessings and if the United States comes on board. Iran, with a restive Kurdish minority of its own remains firmly opposed. But Turkey, which has more Kurds than Iraq, Iran and Syria combined, appears to be shedding its fears. Indeed, by enabling the Kurds to export their oil without Baghdad’s consent, Ankara is helping to shore up their financial independence.

Aydin Selcen, a prominent former diplomat, who opened and headed the first Turkish Consulate in Erbil in 2010, believes Turkey must do more to bail out the KRG. The most effective way of doing so, he argued in an interview with Al-Monitor, would be for the state-owned Turkish Energy Company, which was set up for deals with the KRG, to buy most if not all of the producing assets of the main oil companies operating in the KRG and in Kirkuk.

But the real opportunities lie in Kurdistan’s rich natural gas reserves. These are expected to fully come on stream by 2018 and exported to Turkey, which is desperate to reduce its dependency on Russian gas. Yet, unless the KRG sticks to pledges of radical reform, that income may be squandered as well.