Can Iraqi Kurds bank on Turkey?

Iraqi Kurdish leaders have been openly talking about independence, but their security situation is precarious, after the fall of Mosul to ISIS militants. 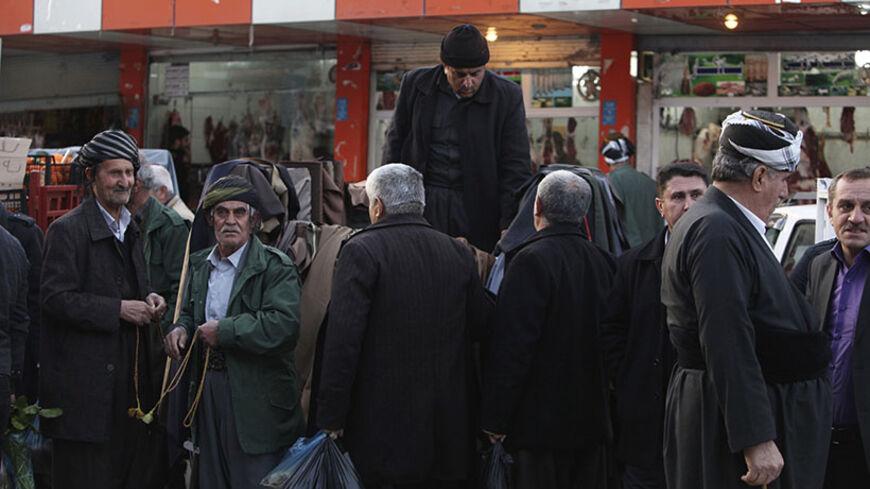 Iraqi Kurdish men converse on a street in the Kurdish town of Halabja, Feb. 1, 2014. - REUTERS/Yahya Ahmad

ERBIL, Iraq — “Before Mosul and after Mosul.” Iraqi Kurdish leaders have taken turns repeating this mantra after capturing vast swaths of disputed territories, including their “Jerusalem,” the oil-rich province of Kirkuk.

Their message is clear. After the dramatic fall of Mosul to Islamic State of Iraq and al-Sham (ISIS) fighters, Iraq cannot be glued back together again. Nechirvan Barzani, the prime minister of the Iraqi Kurdistan Regional Government (KRG), put it to the BBC like this: “I think it will be very difficult for [the] situation to go back as before. I don’t think it [Iraq] can stay together again.”

Coupled with the Iraqi Kurds’ fresh territorial gains, statements such as these have prompted a flurry of punditry, much of it concluding that the Iraqi Kurds are on the brink of declaring independence.

Fellow Al-Monitor columnist Denise Natali provided an eloquent counterpoint to such assertions in her article “Iraqi Kurds maneuver between Maliki and Mosul.” After a trip to Iraqi Kurdistan where I met with various senior Iraqi Kurdish leaders, I tend to agree with some of Natali’s arguments. Despite the Kurds’ territorial windfalls, there remain serious obstacles to independence. Indeed, it is questionable whether it is a realistic goal in the short term.

The overwhelming majority of Iraqi Kurds aspire to statehood. Massoud Barzani, the KRG president and son of the legendary Kurdish leader Molla Mustafa Barzani, feels that it is his historic mission to fulfill his father’s goal of a free homeland for his people.

Certainly circumstances have never been this fortuitous.

Over the past 23 years since Kurdish self-rule took root under a Western security umbrella, Iraqi Kurdistan has gone from being a poor, war-wracked backwater to an increasingly prosperous and modern statelet, with a booming free-market economy and a more democratic and secular system than most Middle Eastern countries could ever boast.

The radical policy shift of Turkey’s ruling Justice and Development Party (AKP), shedding decades of hostility to embrace Iraq’s Kurds, has had a transformational effect. Huseyin Celik, Turkey’s government spokesman, told to the Iraqi Kurdish news portal Rudaw, “The Kurds of Iraq can decide for themselves the name and type of entity they are living in. The Kurds, like any other nation, will have the right to decide their fate.” His words had a bombshell effect.

To be sure, Turkey’s support is critical to any plans for Kurdish independence. The question is, can Turkey’s support be enough? And just as pivotally, ought the Kurds be putting all their eggs in the Turkish basket? A growing number of Kurds demand to know.

Turkey is landlocked Iraqi Kurdistan’s top trading partner and its sole outlet for its vast oil and gas reserves. Many Iraqi Kurds I spoke to professed their admiration for Turkey’s Prime Minister Recep Tayyip Erdogan for embracing the Iraqi Kurds so unequivocally. And never as much as when he invited Massoud Barzani to Diyarbakir and listened to him address tens of thousands of locals in the formerly banned Kurdish language.

More recently, Erdogan has ridden to the cash-strapped KRG’s rescue as first reported by the Washington Post by bailing it out with a hefty loan. Differences over sharing Iraq’s oil revenue prompted Baghdad to withhold the Kurds’ 17% share of the national budget. As a result, the KRG has been unable to pay salaries for months. The recent expansion of its territories means that there are that many more salaries to pay. And now that they account for a quarter of Iraq’s population, the Iraqi Kurds suggest they ought to be allotted a quarter of the national budget.

Official sources, who declined to be identified by name because of the sensitive nature of the topic, confirmed that Turkey had extended at least one “loan” to the KRG amounting to several hundred million dollars, though they did not specify the precise amount. A figure being bandied about is $500 million.

Both sides have touted Turkey’s energy dealings with the KRG as proof of their determination to press forward in the face of rebukes from Washington and threats from Baghdad not to act independently. The KRG is adamant that its crude exported via a newly built pipeline to Turkey and loaded onto three separate tankers from the Mediterranean port of Ceyhan has “already been sold.” Yet, a month on, there is no confirmation that any of their cargoes have been discharged. American meddling and fear of legal tangles with Baghdad appear to have shrunk the appetite for Kurdish oil.

Indeed, it remains unclear whether Turkey is willing to shoulder the legal and political risks arising from the loading of tankers with KRG crude, either. Buying the crude itself would have been the surest way of proving its commitment. There is no evidence that it has. Turkey’s 50-year-long deal to purchase Iraqi Kurdish crude at what one Turkish official described to Al-Monitor as the “most favorable terms in the history of the republic” remains opaque.

For instance, little is known about the state-owned Turkish Energy Co. (TEC), which was created in 2012 as a commercial vehicle for the government’s energy transactions with Kurdistan.

The Iraq Oil Report, a respected industry publication, contended that the Turkish government’s “original plan was to sell up to 49% of TEC shares to private-sector partners … yet the companies hand-picked for the opportunity to purchase a large share of Kurdistan exploration acreage were also politically or personally connected to Erdogan. … That scheme hit a snag when, on Dec. 17, 2013, a corruption scandal upended the political landscape in Turkey and brought intense scrutiny on Erdogan. Erdogan was forced to change course. TEC is still entirely state-owned and will be for at least another year or more, according to several government and industry sources.”

Moreover, with presidential elections around the corner in August and parliamentary elections due to be held next summer, it seems unlikely that Erdogan would risk alienating his nationalist supporters by giving his blessing to an independent Kurdistan. It's even less likely after the Kurds’ seizure of Kirkuk, which ethnic Turkish Turkmen claim as theirs.

All of this compels some Kurds to question the merits of entrusting their fate to Erdogan, a leader whose own political future is clouded by corruption charges and foreign policy headaches such as Syria and ISIS’s seizure of 90-plus Turkish hostages, including the entire staff of the Turkish consulate in Mosul.

Setting aside Turkey and energy tangles, the Kurds have a host of other issues to grapple with before independence becomes a sustainable option. For starters, the region’s other big power, Iran, needs to be on board. What sort of carrots might the Kurds have to offer? The Iranians have plenty of their own gas and oil. A senior Iraqi Kurdish official who spoke to Al-Monitor on condition of anonymity insisted, “Iran is behind ISIS.”

He was apparently suggesting that Iran supported ISIS in Mosul to get back at Turkey and the Kurds, one of a slew of counterintuitive theories that are floating around.

The official added that, “We repeatedly warned Turkey against supporting jihadist groups in Syria, they made a big mistake.”

Then there are the perennial squabbles amid the Kurds themselves. The differences between Massoud Barzani’s Kurdistan Democratic Party (KDP) and Jalal Talabani’s Patriotic Union of Kurdistan (PUK) were amply highlighted in their approach to the Mosul crisis. According to BasNews, an online Kurdish news site, “While the KDP believes that the Kurdish enclave should remain neutral and protect only its territories, including the disputed areas, the PUK claims that the Kurdish region should provide the Iraqi army with military support.”

To be sure, the most immediate challenge facing the Iraqi Kurds is what they call their “new neighbor”: ISIS.

The security situation has never looked as fragile and Turkey would probably be unwilling to wade in with its troops to help if need be. The idea that the United States would support Kurdish independence in exchange for their military support against ISIS is a stretch. Washington’s policy, no matter how muddled, remains unchanged. It wants Iraq to remain united, at least for now.

Indeed, as the Kurds begin to grasp the enormity of last week’s changes, another truth is sinking in: Without American security guarantees, it would be reckless to break free.

Editor's note: This article has been updated since it's initial publication.