Turkey’s foreign minister is touring Iraq in a likely bid to boost ties with his country's oil-rich neighbor as the United States ends the waivers that allowed Turkey to buy oil from Iran. 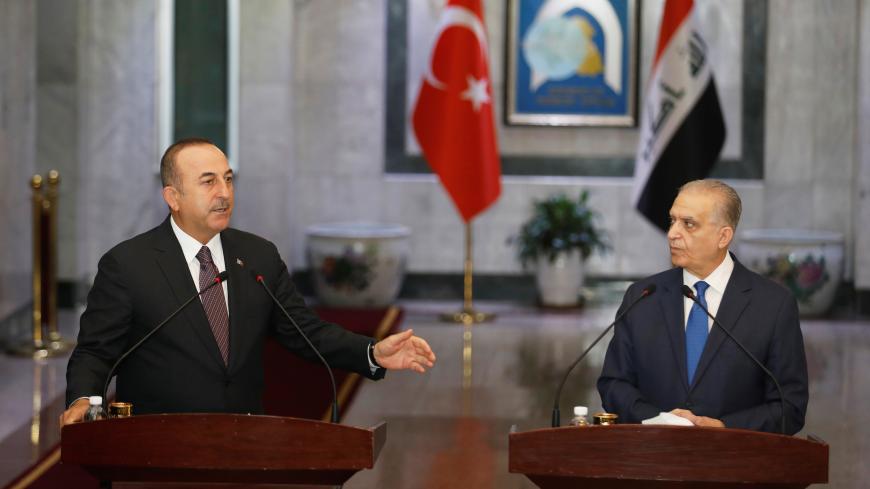 Turkey’s Foreign Minister Mevlut Cavusoglu met with Iraqi Kurdish leaders today on the last leg of an ambitious visit to Iraq, in which the Turkish diplomat unveiled plans to reopen consulates in Mosul and Basra and to establish new ones in Kirkuk and Najaf. Cavusoglu also announced that Turkish President Recep Tayyip Erdogan would pay a formal visit to Iraq before the year's end.

The timing of the two-day tour, which took Cavusoglu from Baghdad to Basra and finally Erbil, prompted speculation that Turkey was turning to its oil-rich neighbor for help after the US administration announced it was ending waivers that allowed a clutch of countries including Turkey to continue buying oil from Iran effective May 2.

Last week Cavusoglu railed against the sanctions, saying, “We don’t accept unilateral sanctions and impositions on the issue of how we will establish relations with our neighbors.”

Getting around the sanctions will be tough if not impossible because taking delivery of Iranian oil regardless of how it's paid for will be deemed sanctionable by Washington.

Hence, Turkey is already looking to alternative suppliers and Iraq’s oil-rich Basra is an obvious choice due to its proximity.

Bloomberg, citing anonymous sources, reported Turkey was looking to import more crude from Basra — ostensibly via tankers — and also from the oil-rich province of Kirkuk through an existing pipeline that runs through Iraqi Kurdish territory. The dual line, which began operating in 1976, was badly damaged during the war against the Islamic State and is operating under capacity.

Sources familiar with the substance of his talks with the prime minister of the Kurdistan Regional Government (KRG), Nechirvan Barzani, intelligence head Masrour Barzani and Deputy Prime Minister Qubad Talabani said Cavusoglu had talked about energy, though not at any great length. Turkey is extremely keen to begin importing Kurdish natural gas from a pipeline that is currently under construction and by Russia's Rosneft. It would help offset its dependency on Iranian gas, which the United States is expected to end waivers for as well. The Iraqi-Kurdish line will be able to handle up to 30 billion cubic meters of gas per year and is expected to be able to meet up to 6% of Europe's yearly gas demand.

Energy clearly was on the agenda in Basra. After meeting with Basra’s Governor Asaad Abdulameer Al Eidani yesterday, Cavusoglu tweeted that with its “strategic location&natural resources, Basra is the economic capital of Iraq. Will establish a trade corridor from Turkey to Basra.” He did not specifically mention either oil or gas, though Basra has loads of both.

In an ironic twist, however, Cavusoglu sought the KRG’s help in persuading Baghdad to drop its 2014 arbitration case filed against Turkey when Ankara allowed Iraqi Kurdistan to export its own oil independently of Iraq’s central government via loading terminals on Turkey’s Mediterranean coast. Baghdad called it a breach of its sovereignty and of the 1973 Iraq-Turkey pipeline agreement. The move was widely interpreted at the time as the most concrete signal yet that Turkey had overcome its paranoia about the establishment of an independent Kurdish state. It also drove a deep wedge between Ankara and Baghdad.

But such thinking was upended when Turkey joined forces with Baghdad, Iran and the United States to oppose the KRG’s 2017 referendum on independence. Though Turkey never sealed the oil pipeline or its border with the KRG, it has since revised its policy of relying mainly on the Barzanis’ Kurdistan Democratic Party (KDP)  - which pushed for the referendum - and has been reaching out to its rival, the Patriotic Union of Kurdistan (PUK) of late.

The new strategy was in evidence as Cavusoglu tweeted that Turkey would be “more present in [Sulaimaniyah] with our private sector&businessmen” after his meeting with Talabani. Sulaimaniyah is the PUK’s unofficial capital while Erbil is seen as the KDP’s.

This development marks a sea change. Turkey has long accused the PUK of backing the outlawed Kurdistan Workers Party (PKK). The PKK, which is based in the Qandil mountains separating Iraqi Kurdistan from Iraq, was granted virtual carte blanche in Sulaimaniyah until the PUK started squeezing the group under Turkish pressure.

Ankara rewarded the PUK by reopening Turkish airspace to Sulaimaniyah-bound flights but it wants more, well-informed sources told Al-Monitor. It views the closure of the offices of the PKK-linked Kurdistan Free Society Movement in PUK-controlled areas as merely a start and still holds the PUK responsible for the August 2017 abduction of two Turkish intelligence agents by the PKK. Turkey expects Baghdad to be more assertive against PKK militants operating in its territory, notably in Yazidi-dominated Sinjar and in Makhmour, the sources briefing Al-Monitor said.

Cavusoglu also broached the matter of a second border gate between Turkey and Iraq in today’s talks. He acknowledged this in yet another tweet, saying it will benefit both Iraq and the KRG. But while Baghdad loves the idea, the Kurds beg to differ. The proposed crossing would be very close to the existing one in Zakho and would again have to run through Kurdish-controlled territory. The Kurds fear that once it's established and a network of roads and bridges connecting Turkey to Tal Afar, Mosul and on to Bagdhad is built, Iraqi forces will move in.  They would then be cut off from their brethren in neighboring Syria, allowing Ankara to bypass Erbil in their dealings with Baghdad, which is precisely what Turkey wants.